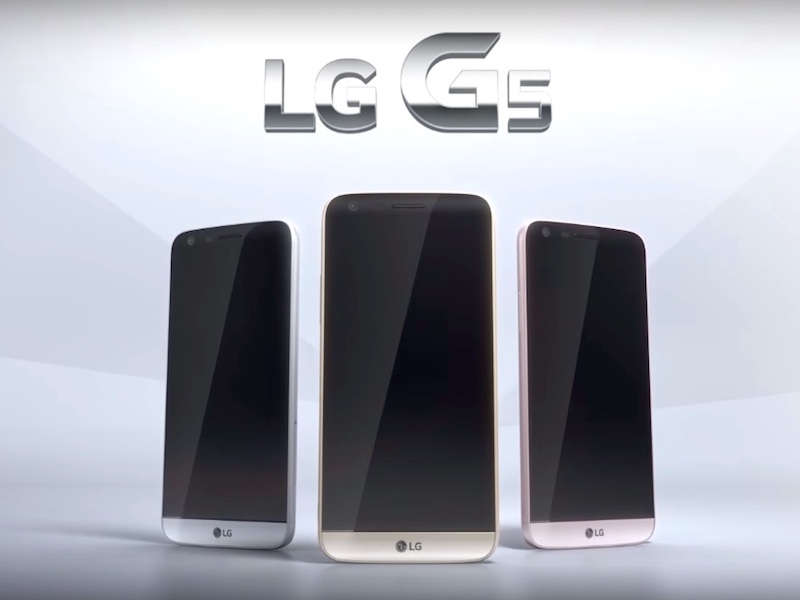 LG isn't disappointing the loyal Android enthusiasts with its new handset. The LG G5, which will be talked a lot about throughout this year, comes with several new features such as detachable modules that enhance the capability of the phone. It also features a dual rear camera, and a removable battery. Here are the five best features in LG's latest flagship smartphone.

1. Modules
Alongside a removable battery, the LG G5 supports a few modular components. The segment of the smartphone below the display can be removed, and replaced with a module. The LG Cam Plus adds its own 1200mAh battery to the smartphone, while also enhancing the camera abilities. It offers an improved grip while adding convenient controls that you have grown familiar with when using a standalone camera. The LG Cam Plus offers physical buttons for power, shutter, record, zoom, and LED indicator. The module can also be utilised for auto focusing and performing exposure lock.

LG Hi-Fi Plus with B&O Play module was the second module LG unveiled on Sunday, a Hi-Fi DAC audio player. It offers 32-bit Hi-Fi DAC upsampling technology as well as 32-bit 384KHz high-definition audio playback. The module can also serve as a separate Hi-Fi DAC (digital to analogue converter) by connecting to any smartphone or PC.

2. Dual rear cameras
The LG G5 has a 16-megapixel and 8-megapixel rear camera. One with a standard 78-degree lens and another with a 135-degree wide angle lens, the widest available in any smartphone. As per LG, the wide angle lens makes it easier for users to capture more landscape, taller buildings or larger groups without having to position oneself further from the subject. On the front side, there's an 8-megapixel camera.

3. Snapdragon 820 SoC, 4GB of RAM
The LG G5 shouldn't fall short in meeting your processing needs. The smartphone packs in the latest, and perhaps the greatest available mobile processor: the Qualcomm Snapdragon 820. This is coupled with 4GB of LPDDR4 RAM. The Snapdragon 820 SoC also offers better connectivity capability, courtesy of the integrated X12 LTE modem that offers Cat 12 download speeds of up to 600Mbps and LTE Cat 13 uplink speeds of up to 150Mbps.

4. 5.3-inch QHD 'Always-On' display
The LG G5 sports a very sharp and high-resolution display: a 5.3-inch QHD IPS display (1440x2560 pixels) of screen density of 554ppi. The display also boasts of 'Always-On' feature, which as the company says, allows users to check time, date, and notifications without turning waking up the phone.

The company insists that the 'Always-On' feature wouldn't take a toll on the battery life. LG says that the Always-On display only requires 0.8 percent of the battery's full capacity per hour. The LG G5 display also offers Daylight Mode feature, which according to claims, gives the smartphone an "exceptional outdoor visibility beyond that of current auto brightness technology."

5. Metal unibody
Last year, LG ditched the plastic body in its flagship smartphone LG G4 in favour of leather, and other finishes. This year, the company is simply going more premium. The LG G5 has a metal unibody, which it says, has a "Shiny Cut" edge that improves gripping.

Noteworthy mentions
Quick Charge 3.0 and LPLE tech
The LG G5 features Quick Charge 3.0 technology that offers fast charging feature. Quick Charge 3.0 is 27 percent faster than the previous generation, the company says, and 45 percent more efficient. Additionally, it also makes use of Low Power Location Estimation technology, which supposedly increases the efficiency of the battery by as much as 41.9 percent by improving the power consumption related to location-based apps.

Companion devices
The South Korean company also utilised the event to announce a number of companion devices for the LG G5 smartphone. These include the LG 360 Cam, LG 360 VR, LG Rolling Bot, and LG Smart Controller.

LG 360 Cam: It's a 360-degree angle camera equipped with two 13-megapixel 200-degree wide angle sensors, 1200mAh battery and 4GB of inbuilt storage, which can be expanded using a microSD card. The accessory can be used to upload images and videos to Google Street View and YouTube360.

LG 360 VR: The company's first virtual reality headset, the LG 360 VR can only be used with the LG G5 via a wired connection - unlike the Google Cardboard, which requires you to insert the smartphone in the body. The foldable headset, which offers 360-degree images and videos captured with LG 360 Cam as well as all Google Cardboard content.

LG Rolling Bot: It resembles Star Wars' BB8, and rolls like a ball while also capturing images and videos with its 8-megapixel camera.

H3 by B&O Play: It's a set of high-end earphones that delivers high-quality 32-bit sound of the LG Hi-Fi Plus with B&O Play. It works with every LG smartphone model.

LG Smart Controller: It allows users to control drones and other smart devices. The company says that it can be used to check the video stream from the drone through the LG G5 in real time.