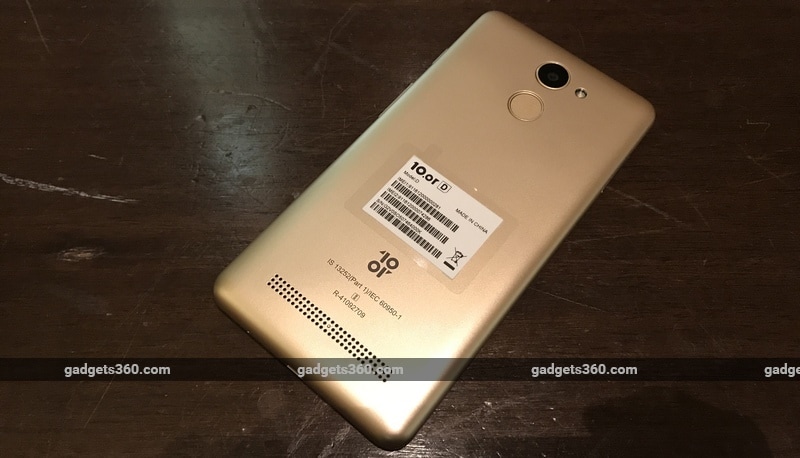 10.or D has been launched in India, following teasers from earlier this week. Part of the company's 10.or (pronounced tenor) private label for smartphones, the launch of the 10.or D follows the launch of the 10.or E and 10.or G in September. The 10.or E and 10.or G were developed in partnership with Huaqin Technology, while the 10.or D has been developed in partnership with Longcheer. The smartphone is part of the company's Crafted for Amazon programme, which features products that have been made in India, and designed for India.

10.or D price in India starts at Rs. 4,999 for the base model featuring 2GB of RAM/ 16GB inbuilt storage, and goes up to Rs. 5,999 for the 3GB RAM/ 32GB inbuilt storage variant. The smartphone will go on sale at 12pm IST on January 5, and registrations for the first sale have already opened. At these price points, the smartphone competes with the recently launched Xiaomi Redmi 5A. No launch offers have been announced for now. However, Amazon Prime buyers of the smartphone will get additional one-year warranty from the company.

10.or D vs Xiaomi Redmi 5A: Specifications compared

Longcheer has tied up with B2X for after sales service for the 10.or D, and says there are 32 service centres in India at the moment. As for the Crafted for Amazon programme, a company spokesperson told Gadgets 360 that it "seeks to look for selection gaps and introduce more products to cater to local customer demand." The 10.or D will ship with a bunch of Amazon apps preloaded that can be accessed via the single sign-in method after booting the phone for the first time.

The dual-SIM (Nano) 10.or D runs Android 7.1.2 Nougat with a stock Android UI - the company says an Android Oreo update will also be released, but has not provided a timeline for this. The 10.or D sports a 5.2-inch HD display, and it is powered by a Snapdragon 425 SoC clocked at 1.4GHz, coupled with 2GB or 3GB of RAM. The smartphone sports a 13-megapixel rear camera complete with autofocus and an LED flash. On the front, it bears a 5-megapixel selfie camera.

The 10.or D has inbuilt storage options of 16GB or 32GB, both of which are expandable via microSD card with a dedicated card slot. It is powered by a 3500mAh battery, rated to deliver up to 2 days of battery life, 70 hours of MP3 playback time, 10 hours of Web browsing, and up to 25 hours of talk time, as per Amazon.

The fingerprint scanner on the 10.or D, placed on the rear panel, is claimed to unlock the smartphone in as little as 0.2 seconds. The company is also touting the presence of a Dirac speaker on the smartphone.