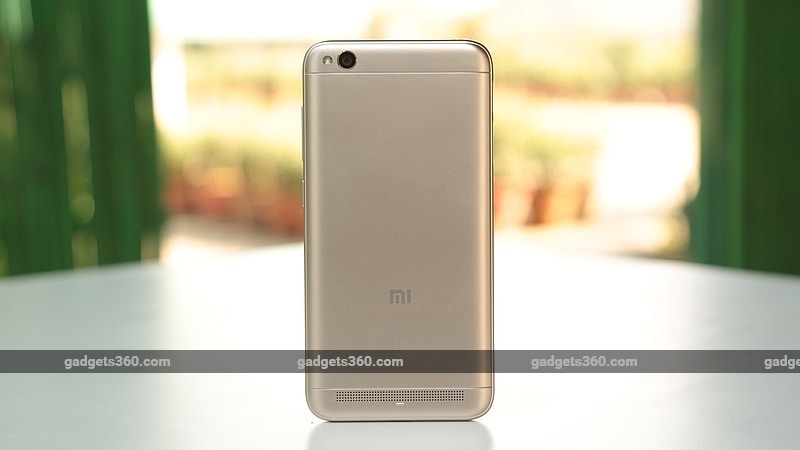 Xiaomi Redmi 5A was launched in India on Thursday, following its launch in China in October. Marketed as the 'Desh ka Smartphone' in the country, the Redmi 5A has an entry-level price tag as well as specifications. The biggest highlight of the smartphone is the company's boast of an '8-day battery life', referring to standby time. The Redmi 5A will also come with MIUI 9 preloaded, which should help the battery performance of the smartphone. Otherwise, the smartphone isn't too much of an upgrade over its popular budget predecessor, the Xiaomi Redmi 4A, which at the time of writing still retails in the country for Rs. 5,999.

Notably, there are some changes over the China variant - the India variant of the Xiaomi Redmi 5A comes with a dedicated microSD card slot, while the China variant has a hybrid dual-SIM slot. Xiaomi has also introduced a 3GB RAM, 32GB storage variant in India, whereas China only had a 2GB RAM, 16GB storage model. All units sold in India will be 'Made in India'.

Xiaomi Redmi 5A price in India

Jio to Offer Additional Rs. 1,000 Cashback to Redmi 5A Buyers

The dual-SIM (Nano+Nano) Xiaomi Redmi 5A runs MIUI 9 based on Android Nougat, and sports a 5-inch HD (720x1280 pixels) display with a pixel density of 296ppi. It is powered by a quad-core Qualcomm Snapdragon 425 SoC that's clocked at up to 1.4GHz, coupled with 2GB or 3GB of RAM. The smartphone bears a 13-megapixel rear camera with an f/2.2 aperture, coupled with LED flash and PDAF. On the front, the Redmi 5A has a 5-megapixel camera with an f/2.0 aperture.

The Redmi 5A comes with 16GB or 32GB of inbuilt storage that can be expanded via microSD card (up to 128GB) with a dedicated card slot. Connectivity options on the smartphone include 4G VoLTE, Wi-Fi 802.11 b/g/n, Bluetooth v4.1, GPS/ A-GPS, Infrared, a 3.5mm headphone jack, and a Micro-USB port. Sensors on board include an accelerometer, ambient light sensor, and a proximity sensor. It runs on a 3000mAh battery, with 5V/1A charging, rated to deliver up to 8 days of standby time, and 7 hours of video playback. It measures 140.4x70.1x8.35mm, and weighs 137 grams.

Is Xiaomi Redmi 5A truly 'desh ka smartphone'? We discussed this on Orbital, our weekly technology podcast. You can listen to it via Apple Podcasts or RSS or just listen to this episode by hitting the play button below.