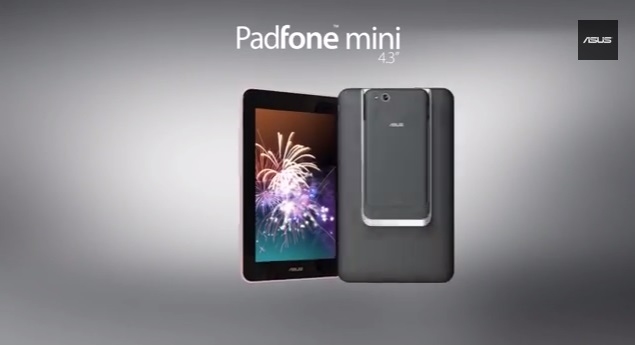 After much speculation, Asus' latest smartphone-tablet hybrid, the Padfone mini 4.3, is now official. Asus launched the Padfone mini 4.3 at an event in Taiwan. The device has been priced at 11,990 New Taiwanese dollars, which translates to roughly Rs. 25,000.

As of now, the Asus Padfone mini 4.3 will be available in Taiwan only, and there is no word on the availability of the latest Padfone in other regions. However, Engadget claims that the Padfone mini 4.3 is expected to be rolled out in China, Hong Kong, Indonesia, Russia, and Singapore.

The Asus Padfone mini 4.3, much like its predecessor the Padfone Infinity, comes with a tablet docking station, which in this case features a 7-inch HD (720x1280) Super IPS display. Like previous iterations, the smartphone fits into the tablet dock, powering the tablet with its hardware.

It sports a 4.3-inch qHD (540x960) Super IPS display which boasts a pixel density of 256ppi. Internally, the Padfone mini 4.3 packs a 1.4GHz quad-core Snapdragon 400 (MSM8226) processor along with 1GB of RAM. It sports an 8-megapixel rear camera with LED flash and also includes a 2-megapixel front-facing camera. The Padfone mini 4.3 comes with 16GB inbuilt storage and can be expanded up to 64GB with the help of microSD card. Connectivity options on the Padfone mini include WiFi, Bluetooth, GPS, AGPS, GLONASS and 3G.

In September, Asus launched the refreshed version of the Padfone Infinity.