Honor X40i 5G is expected to feature a space-inspired design. 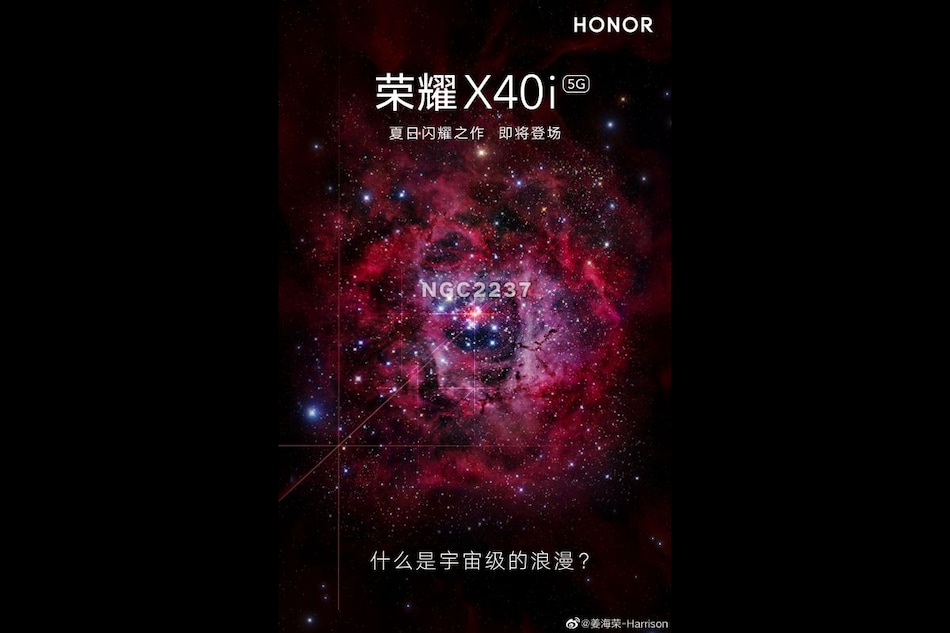 Honor X40i 5G has been officially announced in China. There are very few details regarding the specifications of the smartphone. The handset from the Chinese company is expected to feature a space-inspired design. The official teaser also indicates that the smartphone will come with a right-angle frame design and a flat display. The Honor X40i 5G is said to be the successor of the Honor X30i 5G, which was launched in October 2021. The X30i 5G was powered by a MediaTek Dimensity chipset under the hood paired with up to 256GB of onboard storage.

The Honor X40i 5G was officially teased by Jiang Hairong, the CMO of Honor Terminal on Weibo. Three posters accompanied the post on Weibo and featured a cosmic/space-inspired design. The purported model number of the handset — NGC2237 — was also teased. The Weibo post has hinted words including ‘acute angle' and ‘lens', but the company is yet to share additional details regarding these specifications.

The poster also hints at the design of the Honor X40i 5G. As mentioned earlier, the smartphone is expected to come with a right-angle frame design and a flat display. The smartphone could also sport a flat-edged design.

The dual-SIM (Nano) Honor X30i runs on Magic UI 5.0 based on Android 11. It sports a 6.7-inch full-HD+ (1,080x2,388 pixels) display with a 19.9 aspect ratio and a hole-punch design. Under the hood, the Honor X30i is powered by an octa-core MediaTek Dimensity 810 SoC, coupled with up to 8GB of RAM. The handset features a triple rear camera setup that comes with a 48-megapixel primary sensor with an f/1.8 lens, along with a 2-megapixel macro shooter and a 2-megapixel depth sensor with an f/2.4 lens. Honor has also provided an 8-megapixel selfie camera sensor at the front of the Honor X30i, along with an f/2.0 lens.

The Honor X30i comes with up to 256GB of inbuilt storage. Connectivity options on the handset include 5G, 4G LTE, Wi-Fi 802.11ac, Bluetooth v5.1, GPS/ A-GPS, USB Type-C, and a 3.5mm headphone jack. Sensors on board include an accelerometer, ambient light sensor, magnetometer, and proximity sensor. There is also a side-mounted fingerprint sensor.