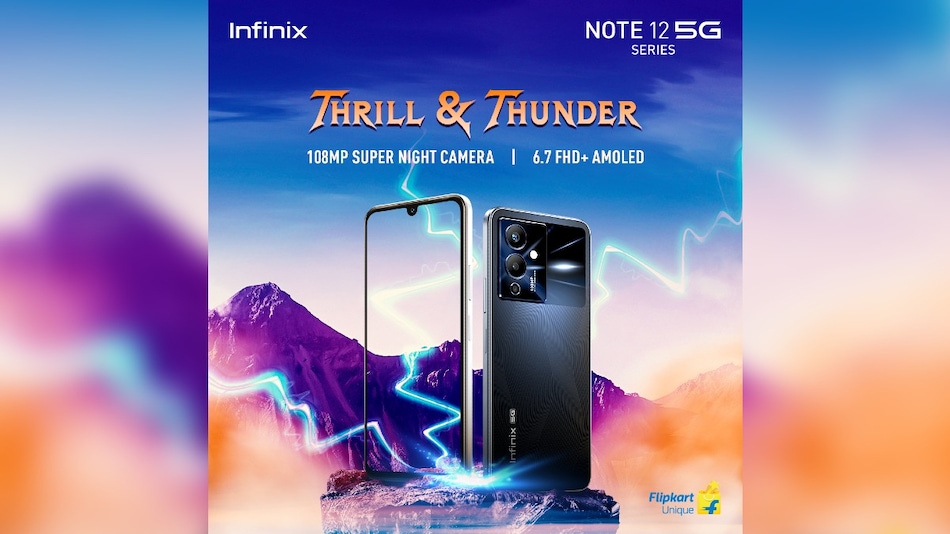 Infinix Note 12 5G Series will launch in India on July 8, the company has announced. At least one smartphone in the series will come with a 108-megapixel main camera sensor and an AMOLED display. It will retail on Flipkart. The series is expected to come with the Infinix Note 12 5G and Note 12 Pro 5G smartphones. Infinix is marketing the handset in line with the release of Thor: Love and Thunder by using lines “Thrill and Thunder” and claims that the phone has a design as sleek as a 'lightning bolt'.

Infinix posted on its Twitter handle that the [Infinix Note 12 5G](https://www.gadgets360.com/infinix-note-12-price-in-india-108108) series will be launched in India on July 8. The smartphone series also has a dedicated microsite on Flipkart. Both these tease that the series will have a smartphone, apparently the Infinix 12 Pro 5G, that will come with a triple rear camera setup headlined by a 108-megapixel camera sensor. The information about other cameras is not known yet. The phone is suggested to sport a 6.7-inch full-HD+ AMOLED display with a waterdrop notch. It will also be a 5G handset.

As mentioned, the company is marketing the smartphone series in line with the upcoming Thor: Love and Thunder movie suggesting that the Infinix Note 12 5G series could have some movie-related themes or wallpapers. Nothing on this front is known yet.

Infinix had previously teased that it would launch two new 5G-enabled handsets to the Indian market: the Infinix Note 12 5G and Note 12 Pro 5G. It hinted that one of these new handsets would feature a 108-megapixel primary camera, an AMOLED display and offer support for 12 5G bands. Looks like these specifications were of the Infinix 12 Pro 5G. They are suggested to come with better specifications as compared to their predecessors.