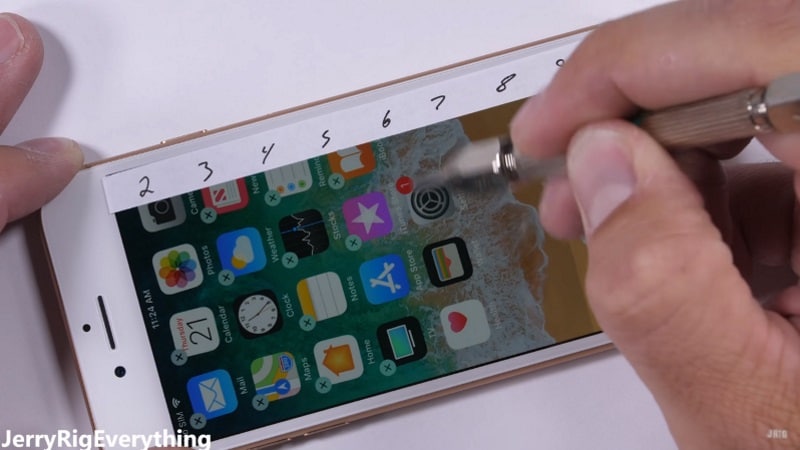 While Apple's new iPhone 8 takes most of its design cues from the last generation model, the new handset has performed impressively in the durability tests. It has been found that the iPhone 8 offers great resistance against scratches and holds up well despite applying extreme pressure from both sides in a bend test.

Following his regular routine, Zack from popular YouTube channel JerryRigEverything has now conducted his durability test on Apple's newly launched iPhone 8. In his test, Zack found out that the iPhone 8 starts scratching at Moh level 6 hardness, which is at par with some of the other flagship smartphones including Samsung Galaxy Note 8. This statistic essentially means that the display will not be scratched easily in day-to-day usage in pockets that also have keys or coins in them.

As the Apple logo at the back of iPhone 8 is now covered with glass, Zack discovered that it is safely protected from accidental smudges. However, Zack pointed out that despite the claims of sapphire usage to cover the rear camera lens by the company, he managed to scratch the camera module glass at Moh level 6 hardness. He said in his video that this implies that the company might be using some proprietary material to form the protection instead of pure sapphire.

Interestingly, in the bend test, which proved to be Achilles heel in the case of iPhone 6 Plus back in the days, the iPhone 8 turned out to be a winner. Zack praised the overall build quality of the handset and pointed out that Apple's attention to detail is commendable.

As premium smartphones are getting expensive by every passing year, most smartphone buyers are concerned about build quality. This is why it is good to see that the latest iPhone model was able to perform well in the durability tests.