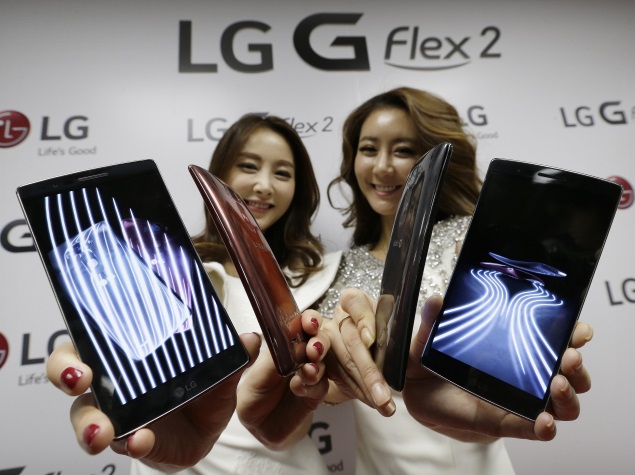 The smartphone is LG's latest effort to expand the use of curved screens as a way of differentiating its smartphones from those of competitors.

When LG released its first version of a curved smartphone in 2013, it was a niche product. The latest iteration shows LG is targeting a bigger market.

The LG G Flex2 is the first smartphone powered by a Qualcomm Snapdragon 810 (a 64-bit octa-core SoC) processor. It is coupled with the Adreno 430 GPU and 2GB of LPDDR4 RAM. The single-SIM smartphone runs Android 5.0 Lollipop and features a 5.5-inch full-HD curved P-OLED display with a 1080x1920 pixels resolution and a 403ppi pixel density.

The company at the CES 2015 launch also confirmed that it improved the 'Self Healing' back from the original LG G Flex, and it will now get healed within 10 seconds at room temperature - significantly lower than the last-generation's three minutes.

The LG G Flex2 sports a rear 13.0-megapixel camera with optical image stabilisation (OIS+), dual-LED two-tone flash, and laser-guided autofocus just like the LG G3. It sports a 2.1-megapixel front-facing camera. The G Flex2 will come in 16GB and 32GB storage variants that are expandable via microSD card.

The device measures in at 149.1x75.3x7.1 - 9.4mm, and weighs 152 grams. The curved handset packs a curved embedded 3000mAh non-removable battery, and will initially be available in two colours: Platinum Silver and Flamenco Red.