The Moto G50 has allegedly been spotted on Geekbench and has got TUV Rheinland Japan certification. 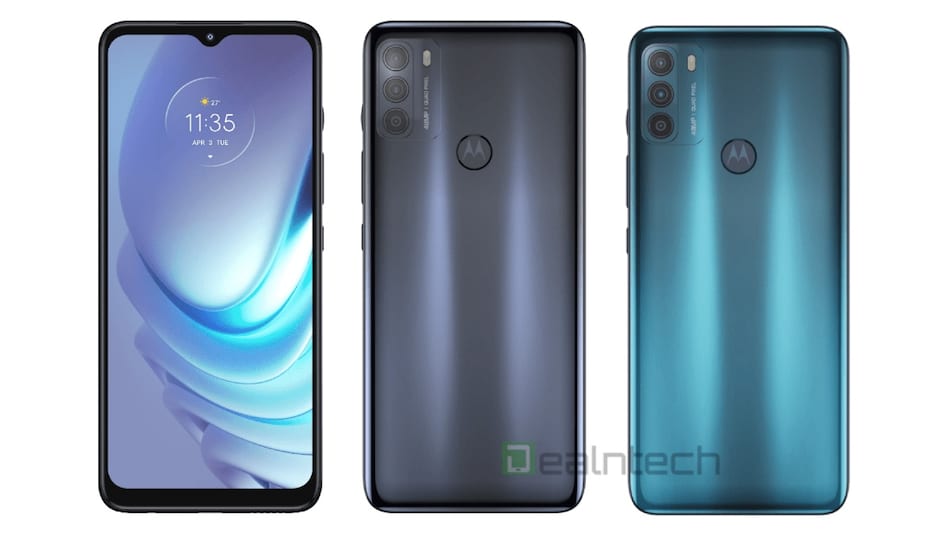 Moto G50 alleged renders have been leaked ahead of its expected March 25 launch. The smartphone has also reportedly been spotted in a TENAA listing. As per the leaked renders, the phone could feature a triple rear camera setup with a 48-megapixel main sensor, and a waterdrop notch display. The TENAA listing tips the phone's battery capacity, OS, and dimensions. Further, reports suggest that the handset is expected to be launched alongside the Moto G100 smartphone that may be powered by Qualcomm Snapdragon 870 SoC.

According to the renders shared in a report by dealntech, the Moto G50 will come with a triple rear camera setup featuring a 48-megapixel primary sensor. The module has “48MP QUAD PIXEL” written on it and has an LED flash. The Motorola phone is seen sporting a physical fingerprint sensor placed inside the Moto Batwing logo at the back. The renders also show a waterdrop notch for the selfie camera, and Blue as well as Grey colour options. The report also claims that the phone could launch along with the Moto G100 on March 25.

It further says that the Moto G50 in Grey colour with the model number XT2137 was also spotted on a Spanish retailer website, which revealed that the price of the European model will be EUR 229.17 (roughly Rs. 19,700) for the 4GB RAM + 128GB storage variant.

A smartphone with the same model number has also been spotted on TENAA certification website. The device's model number is XT2137-2, which is said to associated with a variant of the Moto G50. Images show the phone has a triple rear camera setup. Furthermore, the listing suggests that the phone will pack a 5,000mAh battery with 10W charging. It also says Android 11 out-of-the-box and lists 164.95x74.93x8.95mm dimensions for the phone.

The Moto G50 with the model number XT2137-2 was also spotted on Geekbench and, as per a previous report by dealntech, on TUV Rheinland Japan certification database as well. The Geekbench listing suggests that this particular device will run on Android 11 and sport 6GB of RAM. It may be powered by a Qualcomm Snapdragon 480 5G SoC. The TUV Rheinland Japan certification suggests that the phone will have a 4,850mAh battery with support for 20W fast charging.