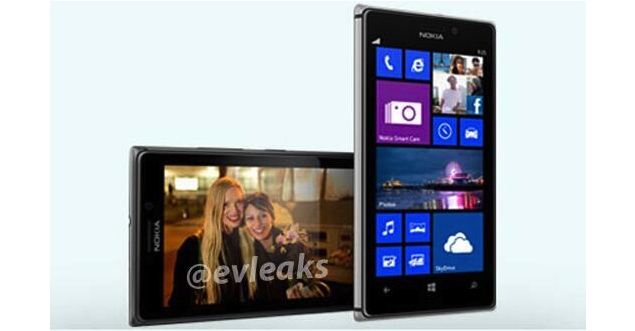 While Nokia is expected to announce a new Lumia flagship phone on Tuesday after teasing it on British TV during the weekend, nothing stops serial mobile leaker @evleaks from leaking pictures of the company's upcoming aluminium body Lumia phone, which is likely to be named Lumia 925.

The images resemble the ones leaked earlier and the phone that appears in Nokia's recent teaser ads. The phone, which is expected to come with an aluminium body and has a big camera lens, has also been referred to as the "Catwalk." So, it's more or less confirmed that the Lumia 925 is indeed the "Catwalk" phone, and is most likely to be announced on May 14.

@Evleaks posted two pictures of what he refers to as 'Nokia Lumia 925' on Twitter - one features the front with the phone standing vertically and lying horizontally, and the other featuring the side of the phone. While the front is completely Black in colour, most likely made of glass, the side shows that aluminium has been used in the construction of the phone and there are two iPhone 5/ HTC One style bands towards the top and bottom, a volume rocker and two other keys. It appears that the phone will be available in Silver and Bronze colours, at least judging by the pictures. The protruding camera lens hump is also visible from the picture of the phone's side.

Nokia has been airing a teaser commercial of a mystery phone which features the back of the phone sporting a huge camera lens and a big flash, with "More than your eyes can see" text interspersed between. The "Catwalk" smartphone is likely to come with a 4.5-inch display. It's expected to be powered by a Qualcomm Snapdragon S4 1.5GHz dual-core processor. Internal storage available on the smartphone will be 16GB and it will pack in 2,000mAh battery. The phone is likely to come with an 8.7-megapixel camera with LED flash.
Comments