Realme C30s Price in India Tipped Ahead of September 14 Launch 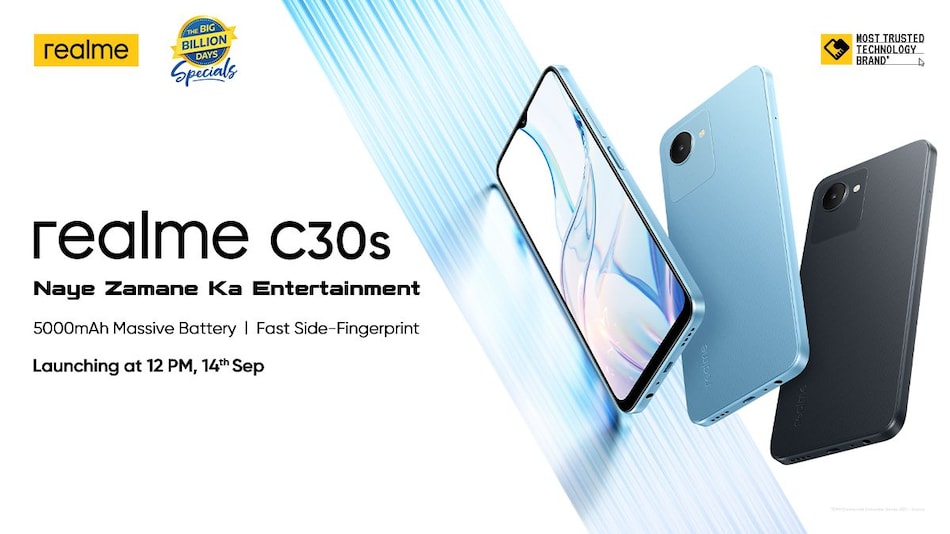 Realme C30s will launch in Black and Blue colour options

Realme C30s price in India has been tipped ahead of the phone's launch in the country. The smartphone is likely to be an entry-level offering from Realme and is claimed to come in two configuration options. A dedicated landing page for the upcoming handset went live earlier this week suggesting that the Realme C30s will sport a 6.5-inch display. It will sit beside the Realme C30 that made its debut in India earlier this year. The C30 gets an octa-core Unisoc T612 SoC.

Realme has already teased that the Realme C30s will sport a 6.5-inch display with 16.7 million colours and 88.7 percent screen-to-body ratio. The phone will be powered by an unspecified octa-core SoC. The Realme C30 was launched with a Unisoc T612 SoC earlier this year.

The Realme C30s will pack a 5,000mAh battery and feature a side-mounted fingerprint scanner for security. Realme claims that the fingerprint sensor can unlock the upcoming handset in less than 1 second. The handset will sport a single camera on the back along with an LED flash.

The phone will sport a water-drop style notch, volume rockers on the right spine, and a SIM tray on the left. The Realme C30s could come with a 3.5mm audio jack, a microphone, a USB Type-C port, and the speaker grille at the bottom.

House of the Dragon Episode 4 Review: Double Standards Cause a Royal Scandal