Samsung Galaxy A50, Galaxy A30 to Go on Sale for First Time in India Tonight 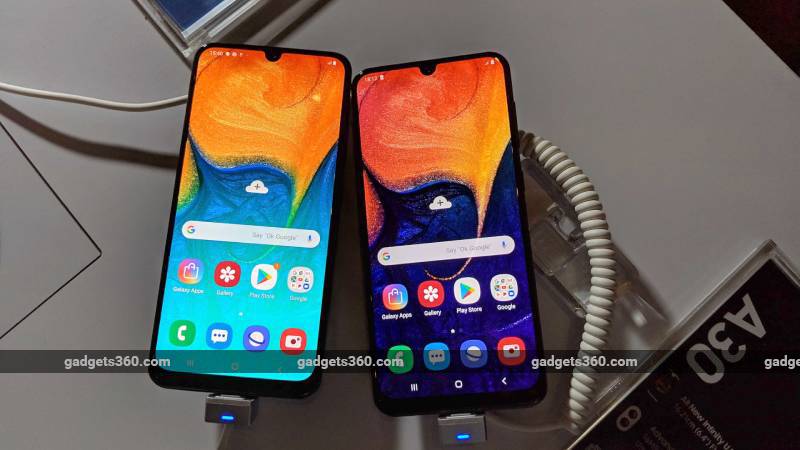 Samsung unveiled its new Galaxy A30 and Galaxy A50 smartphones at MWC 2019, confirming a rejig of its Galaxy A series. The two phones, along with the Galaxy A10, were launched in India recently, and the Galaxy A30 and Galaxy A50 are set to go on sale on Amazon, Flipkart, and Samsung e-shop from midnight tonight. The two phones will also be available at partnered retail stores from tomorrow. The Samsung Galaxy A10, on the other hand, will be available from March 20 in India.

Samsung Galaxy A30 and Galaxy A50 will be available on Amazon, Flipkart, Samsung e-Store, and retail outlets as well. The sale of the two phones will begin at 12am IST i.e., midnight tonight. The Samsung Galaxy A10 price is set at Rs. 8,490, and it will go on sale from March 20.

The Samsung Galaxy A50 runs on Android Pie along with One UI on top. it features a 6.4-inch full-HD+ (1080x2340 pixels) Infinity-U Display backed by a Super AMOLED panel and 91.6 percent screen-to-body ratio. Further, the Galaxy A50 is powered by an octa-core Exynos 9610 SoC, coupled with 6GB and 4GB RAM options.

The Galaxy A50 has 64GB of onboard storage option that is expandable via microSD card (up to 512GB). There is also an in-display fingerprint sensor. The smartphone packs a 4,000mAh battery that supports 15W fast charging via USB Type-C port.

Dell Beats Revenue Estimates in First Report as Public Company
Fortnite Season 8 Is Out Now: New Map Locations, Pirate Cannon, and Everything Else You Need to Know