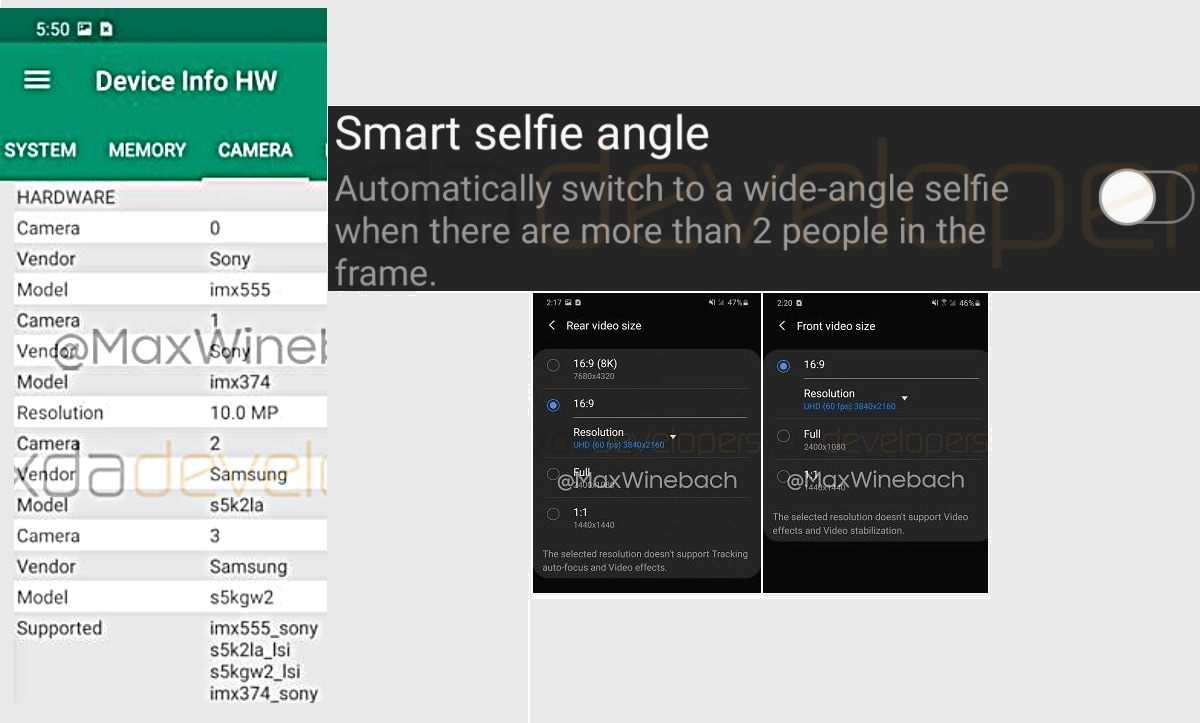 Samsung Galaxy S20+ popped up online recently in the form of live images, revealing its design and some notable aspects like a quad rear camera setup and centred hole-punch. Now, details about the camera hardware and features of the Samsung Galaxy S20 series phones have been leaked. The Galaxy S20 and Galaxy S20+ are said to pack a 64-megapixel camera, while the Galaxy S20 Ultra will come equipped with a 108-megapixel shooter. Impressively, the Galaxy S20 series phones will let users capture 4K videos at 60fps with both the front and rear cameras. Other leaked camera features include Smart Selfie Angle and Single Take among others.

Noted tipster @Universe has shared details about the camera hardware on each Galaxy S20-series phone, which are listed below:

The camera details revealed by the tipster are a bit different from what we've come across in previous leaks and reports. Also, there is no mention regarding the type of sensor, but it appears that the 12-megapixel sensor is a mainstay on all three phones and will act as the main sensor, while the other 12-megapixel sensor will be the wide-angle snapper. However, the role of each camera sensor is not known, especially the high-resolution 108-megapixel and 64-megapixel snappers. Needless to say, process this one with a bit of scepticism.

As for the leaked Galaxy S20+ camera details, they come courtesy of XDA-Developers. As per the report, the primary camera on the Galaxy S20+ is a 12-megapixel unit that employs the Sony IMX555 sensor and has a pixel size of 1.8 micron. The secondary camera is a 64-megapixel unit with an in-house ISOCELL S5KGW2 sensor. The tertiary snapper employs Samsung's own ISOCELL S5K2LA sensor. The front camera is said to be a 10-megapixel shooter with the Sony IMX374 sensor. Interestingly, the front camera will let users shoot 4K videos at 60fps, just like the main rear camera.

Talking about camera features, the Galaxy S20+ will let users capture 8K videos at 30fps, and this will most likely be available on the Galaxy S20 and the Galaxy S20 Ultra as well. The rear camera will be able to shoot 4K videos at 60fps backed by OIS and EIS, but it not clear if it will take advantage of Samsung's new Super Steady OIS technology that made its debut on the Galaxy S10 Lite.

The zoom-in mic feature that allows users to focus on audio from a particular source while recording videos will also be there on the Galaxy S20+. But there will be a couple of new features as well. The first one is Smart Selfie Angle, that prompts the camera app to automatically switch to the wide-angle mode when it detects more than two people in a frame.

The second new, but more interesting feature, on the Galaxy S20+ will reportedly be Single Take. As demoed in the accompanying video above, the phone will automatically capture multiple photos and videos of a subject, and will then recommend the best shots. The Single Take feature also has a custom interface in the gallery. A similar implementation can be seen on Google's Pixel phones, but they only click multiple still photos of the subject, and not videos.

Another helpful feature on the Galaxy S20 series phones will reportedly be Pro Video. As the name suggests, it will let users take advantage of the Pro mode settings to have more control over video capture. Interestingly, the Director's View feature that we recently came across in another leak was absent on the Galaxy S20+ unit from which the aforementioned leaks originated. However, it was running pre-release software, so the feature might be available on the stable build when the phone goes on sale following its launch on February 11 at the Galaxy Unpacked event.

Flipkart Republic Day Sale 2020 to Begin With Discounts on Redmi 8A, Motorola One Action, Realme 3, iPhone 7, and More