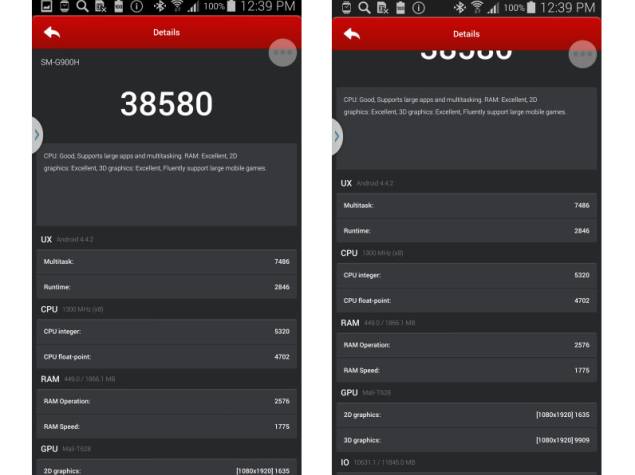 During the Mobile World Congress, Samsung had announced its latest flagship - the Galaxy S5 - and said it would release the device globally on 11 April.

The Galaxy S5 comes in two different variants - one with a Snapdragon 801 SoC and 4G LTE connectivity, and the other with an Exynos octa-core SoC (which will be available in India) on no 4G. The Snapdragon LTE variant of the device was previously considered to be the better among the two, with a very high score that would have been hard to beat.

Now according to a GSMarena report, which quotes a tipster, the octa-core Samsung Galaxy S5 went through the AnTuTu 4 benchmark. This time the results show an improvement over the Snapdragon LTE variant.

The website has posted the screenshots of the AnTuTu benchmark result where it overall an scored 38,580, which the report claims is better than Snapdragon 801 variant AnTuTu result at around 36,000 (the report hasn't specified an exact figure).

It seems that the company has taken the previous complaints of the Exynos variant of the Galaxy S4 not performing as well as its Snapdragon counterpart seriously, and worked on the chipset to give users similar performance for both variants of the Galaxy S5.

Both the variants of the Samsung Galaxy S5 will ship with Android 4.4.2 KitKat and feature a 5.1-inch Super AMOLED display with a 1080x1920 pixels resolution. The display has already been declared as "the best performing smartphone display" ever tested by DisplayMate.

The smartphone will be available in 16GB and 32GB variants, with microSD card expandability up to 128GB. The Galaxy S5 packs a 16-megapixel rear camera with HDR and a 2.1-megapixel front-facing camera.

The Samsung Galaxy S5 is already up for India pre-orders with Rs. 1,500 booking amount.
Affiliate links may be automatically generated - see our ethics statement for details.