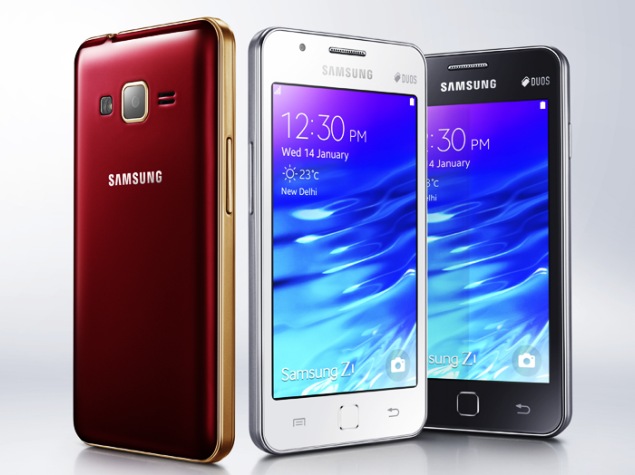 Samsung has launched its first Tizen-based smartphone in India. The Samsung Z1 will be available from Wednesday itself in Black, White, and Wine Red colour variants, and has been priced at Rs. 5,700.

The South Korean consumer electronics giant has been banking on Tizen to reduce its reliance on Google's Android operating system, which powers most of its smartphones and almost all of its tablets. Samsung along with the Tizen Association, Intel, and the Linux Foundation has been working on Tizen for years now, and the OS saw its first release in early 2012.

The first Tizen product to be launched was the Samsung NX300M camera, back in October 2013. Since then, the company has used the operating system on its Gear smartwatches, and will soon launch Tizen-based televisions. The company had first unveiled a Tizen-based smartphone in June, the Samsung Z, but never did release it in its launch market in Russia - saying it was indefinitely postponed.

The Samsung Z1 is an entry-level handset that the company is targeting as a budget entertainment device for the Indian market, with free content from Club Samsung, apart from free music content from Hungama for a period of three months. Z1 users will also get bundled subscriptions from nexGTv and BoxTV worth Rs. 1,750, with access to over 7,000 Bollywood and Hollywood movies, apart from local TV shows.

The smartphone with its simple interface is said to be ideal for first-time smartphone users. Other Tizen advantages that Samsung is boasting of include it being a lightweight platform that offers a fast boot time, quick access to apps, and fast browser performance using compression. The company is also touting a built-in SOS alert system that enables users to reach out for help by pressing the power button four times. The Z1 also features a private mode to keep sensitive user content away from prying eyes, and a preloaded antivirus.

Featuring a 4-inch WVGA (480x800 pixels) PLS display, the Samsung Z1 runs Tizen 2.3 on a 1.2GHz dual core processor coupledwith 768MB of RAM. It sports a 3.1-megapixel rear camera; a VGA (0.3-megapixel) front-facing camera; 4GB of inbuilt storage expandable via microSD card (up to 64GB), and a 1500mAh battery that is rated to deliver up to 7 hours of video playback, and 8 hours of talk time. The company is also touting an 'ultra power saving mode'.

Aircel and Reliance are also offering 500MB of free 3G data per month for six months with the Samsung Z1. Commenting on the launch, Hyun Chil Hong, Samsung India Electronics president and CEO, said, "The smartphone market in India is rapidly evolving, with many consumers using their device as their screen of choice for content including videos, television programs, and video games, as well as a range of apps. We have customised the Samsung Z1 to meet these unique, entertainment-focused needs of local Indian consumers for a personal and reliable mobile experience."

Of course, with any new operating system, the all important consideration is its app ecosystem, and the Windows Phone and BlackBerry platforms can be seen as examples of where the lack of app availability is still rampant despite their age. Samsung says the Tizen store is growing fast, and contains all the important apps already. The company gave WhatsApp as an example. The actual number of apps on the store was not disclosed.

As Sony's PS4 Turns 1 in India, Is It a Good Time to Buy?
Telecom Operators Seek Fresh Pre-Bid Conference on 3G Spectrum Auction