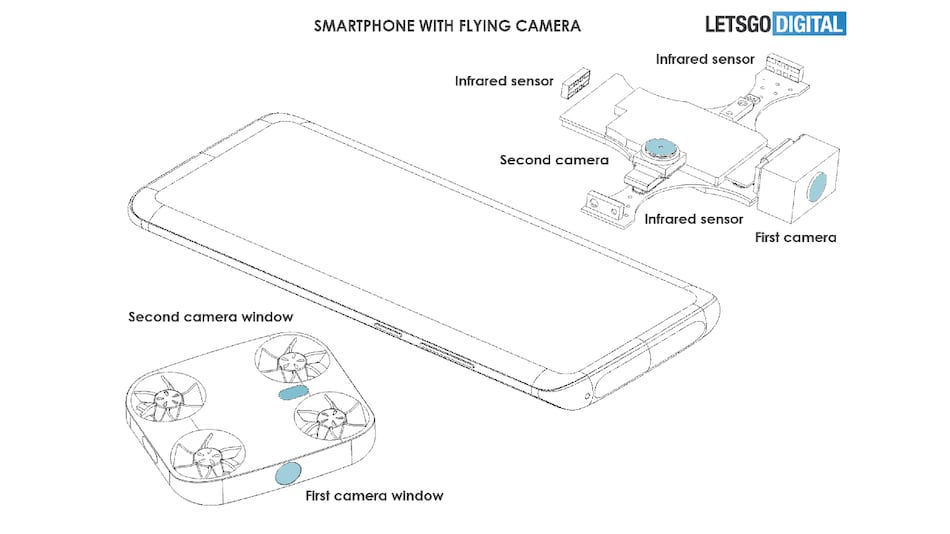 Vivo has reportedly filed a patent for a smartphone with an integrated flying camera. The camera will have the ability to detach from the smartphone and fly in the air to enable users take photos creatively. The patent has been filed in December 2020 with the World Intellectual Property Office (WIPO) and is titled 'Electronic device' for Vivo Mobile Communication. A sketch shows how the detachable flying camera will work. It will integrate batteries, camera sensors, and infrared sensors inside.

LetsGoDigital was the first to spot this patent by Vivo. A sketch published in the filing shows a small compartment on the top edge of the smartphone where the detachable camera can slide in and out. This camera has four propellers to take it up in the air, a battery compartment for solo flying purposes, and a double camera system – with one sensor taking the front aerial view while the other capturing footage below. The patent notes that the camera system inside the smartphone can slide out completely from the housing together with the mounting bracket.

The camera module is also equipped with multiple infrared sensors at the edges to calculate the distance to other objects and avoid collision. The patent notes that the flying camera can be controlled using the smartphone with which it is attached and is likely to offer air gesture support as well. While the sketch shows two cameras attached to the module, the patent notes that a third and fourth camera can also be added.

Of course, this is just a patent and there's no certainty on the launch of such a handset in the future. In fact, the practicality of such an idea is quite doubtful with today's technology. There are some clear obstacles that Vivo has to iron out, for instance that the lightweight and small flying camera may be more prone to wind turbulence and the resultant footage should likely be too shaky and unstable. Vivo could introduce a stabilising gimbal system inside the cameras to enable less shaky footage but the impact might be limited.

Most OEMs file patents way ahead of its launch plans for copyright reasons. Some patents don't amount to anything, and this could also see the same fate, and even if it does become a reality, expect a very long wait.