Xiaomi 12S series launch will be livestreamed through the company's social media channels. 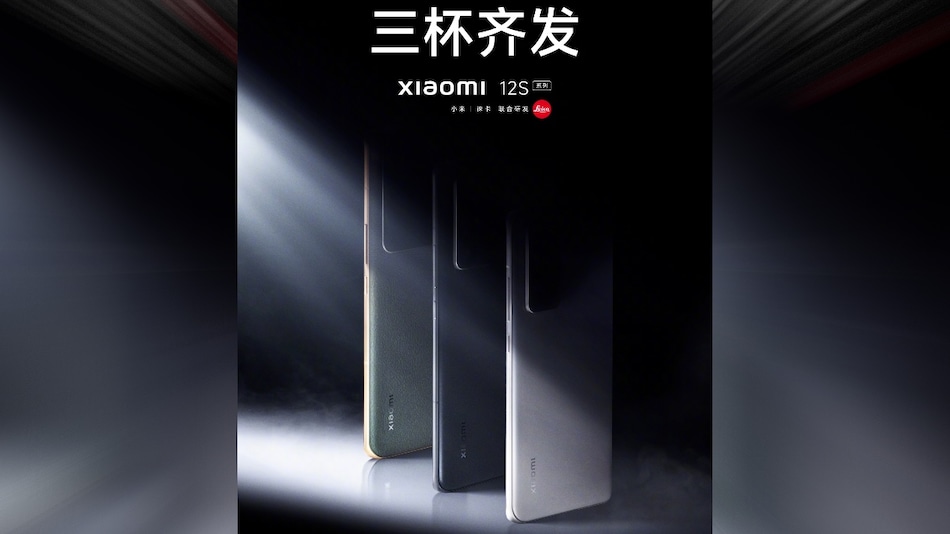 Xiaomi 12S Ultra, Xiaomi 12S Pro, and Xiaomi 12S are set to launch on July 4, the Chinese company has announced. The Xiaomi 12S series will be the company's first range to come with Leica optics. All three phones in the series are also expected to be powered by Qualcomm's recently unveiled Snapdragon 8+ Gen 1 SoC. However, some previous reports suggested that the Xiaomi 12S Pro would also come in a distinct variant carrying the MediaTek Dimensity 9000 chip.

On Tuesday, Xiaomi released a teaser image to announce the launch date of the Xiaomi 12S series. The launch will take place at 7pm CST Asia (4:30pm IST) on July 4 and will be livestreamed through Xiaomi's social media channels.

After so much hard work, we can finally share our latest innovation, Xiaomi smartphones co-engineered with Leica, ushering in a new era in imagery technology. Looking forward to sharing more at the #Xiaomi12SSeriesLaunch on July 4, 19:00 GMT+8! pic.twitter.com/YHe5Zvqjdb

The teaser image also highlights the partnership between Xiaomi and Leica that was announced last month. Separately, the company confirmed on Weibo that the series will comprise three different models: the Xiaomi 12S Ultra, Xiaomi 12S Pro, and the Xiaomi 12S.

Xiaomi is expected to start creating some hype for its new smartphone series in the coming days. Meanwhile, some recent reports have suggested the specifications of the upcoming phones.

The Xiaomi 12S series is expected to be one of the first smartphone families to come with the Snapdragon 8+ Gen 1 SoC that Qualcomm unveiled last month. Companies including Asus, Realme, and iQoo are also about to release their new models with the latest Snapdragon chip.

Xiaomi is also likely to continue its partnership with MediaTek and bring the Xiaomi 12S Pro Dimensity Edition powered by the chipmaker's Dimensity 9000 SoC.

The Snapdragon 8+ Gen 1-powered Xiaomi 12S Pro is rumoured to have 120W fast charging support. However, listings on the Compulsory Certification of China (3C or CCC) website suggested that the regular Xiaomi 12S as well as the Xiaomi 12S Pro both would carry 67W charging.

An alleged Geekbench listing also recently suggested that the Xiaomi 12S would run on Android 12 out-of-the-box and carry the Snapdragon 8+ Gen 1 SoC with a clock speed of up to 3.19GHz.

We can also safely expect that the entire Xiaomi 12S series would offer AMOLED displays with high refresh rates as well as a metal body to deliver a premium look and feel to users.