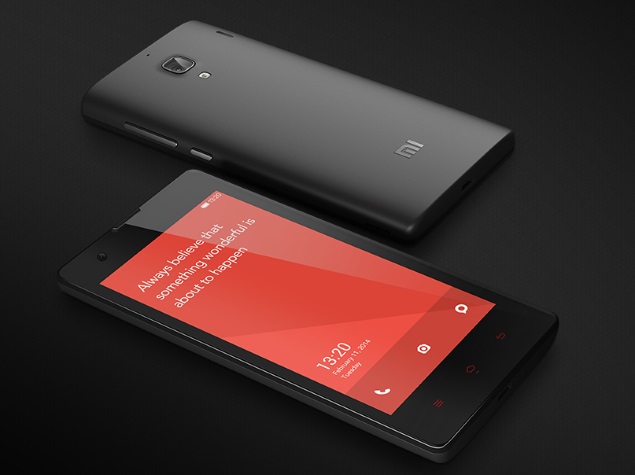 The budget Xiaomi Redmi 1S smartphone, which was launched recently at Rs. 5,999, will be available in its first flash sale in India starting 2pm IST on Tuesday on Flipkart for registered users.

Xiaomi and Flipkart, continuing the flash sale trend started with the Mi 3, had announced last week that 40,000 units of the new budget smartphone would be available for the first flash sale on Tuesday, and that 100,000 users had already registered.

Considering purchasing the Redmi 1S? Do read our review before buying, to see if it really is the smartphone for you. We found that the Redmi 1S in several aspects surpassed many more expensive smartphones in the market, due to its reliable performance, great camera, crisp screen and excellent battery life at a Rs. 5,999 price point. The only major drawback we see is the lack of Android 4.4 KitKat at the moment - however Xiaomi had at launch announced it will receive MIUI v6 with Android 4.4 KitKat before the end of the year. Notably, we did not compare the phone extensively with the Moto G, as the successor of the popular smartphone is expected to launch soon.

Flipkart, the exclusive online retailer of Xiaomi handsets in India, now claims that over 250,000 people have registered for the first flash sale of the Redmi 1S. The Flipkart page clearly notes that "Registrations will not be carried over. You need to register again for next sale."

Further, the Flipkart listing mentions that the Redmi 1S will come with a complimentary Micro SIM-card adapter and a screen protector, and that orders will be delivered in 7-10 business days. To be clear however, Hugo Barra, Vice President of Xiaomi Global, had at the launch event noted that the smartphone would ship with two Micro-SIM card adapters, and reconfirmed via tweet a screen protector 2-pack (matte and glossy).

Considering that limited stocks of the Redmi 1S will be available in India, the popular e-commerce giant has revealed that it will limit orders to one phone per registered email ID per sale.

Xiaomi had faced a lot of criticism from Indian consumers due to the limited number of Mi 3 (Review | Pictures) units in each flash sale, and the speed of the stock being sold. It is yet to be seen how both the companies (Flipkart and Xiaomi) handle the sales of the Redmi 1S in India.

On Monday, the Redmi 1S went on sale one day prior to its India availability only for select Flipkart First subscribers. The smartphone was automatically added to the cart of the first two thousand Flipkart first customers who registered for the handset's flash sale on Tuesday.

The company, also referred to as 'China's Apple', had reportedly discontinued the Mi 3 in India to focus on the Redmi 1S. However, Xiaomi's India Head, Manu Jain, told NDTV Gadgets that the reports were off the mark, and that the company would not be discontinuing sales but couldn't provide an exact timeline.