40,000 Xiaomi Redmi 1S Phones to Go on Sale via Flipkart on September 2 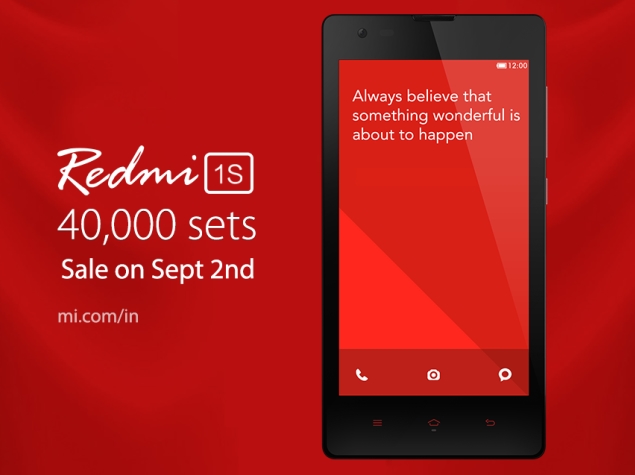 Following the launch of the Redmi 1S on Tuesday, Xiaomi India has on Thursday announced that 40,000 units of the new budget smartphone will be available on Flipkart for its first flash sale on September 2.

While the registration will go on till September 1 midnight, the company on its Facebook page has claimed that over 100,000 people have already registered for the smartphone's first flash sale.

Notably, the company had launched the Xiaomi Redmi 1S at Rs. 5,999 on Tuesday, and registrations began from 6pm IST on the same day.

The dual-SIM (regular-SIM) Xiaomi Redmi 1S with dual standby comes with a 4.7-inch 720x1280 pixel IPS-LCD display and AGC Dragontrail glass protection with a pixel density of roughly 312ppi. It runs on Android 4.3 Jelly Bean with MIUI v5 skinned on top. The company has promised an upgrade to Android 4.4 KitKat with MIUI v6 towards the end of the year.

The Chinese smartphone manufacturer has enjoyed much success in India with its Mi 3 flash sales, and with as many as 20,000 units going out of stock in under 3 seconds in several such sales. Notably, the most units available in a single Xiaomi Mi 3 (Review | Pictures) flash sale were 20,000.

The online flash sale model seems to have worked out very well for the company, which said it had sold over 95,000 units since the phone's launch in India in late-July.

Meanwhile on Wednesday that it was reported that Xiaomi was discontinuing the Xiaomi Mi 3 in India, and when NDTV Gadgets spoke to Manu Jain, Head of Xiaomi India, he clarified that the reports were off the mark.