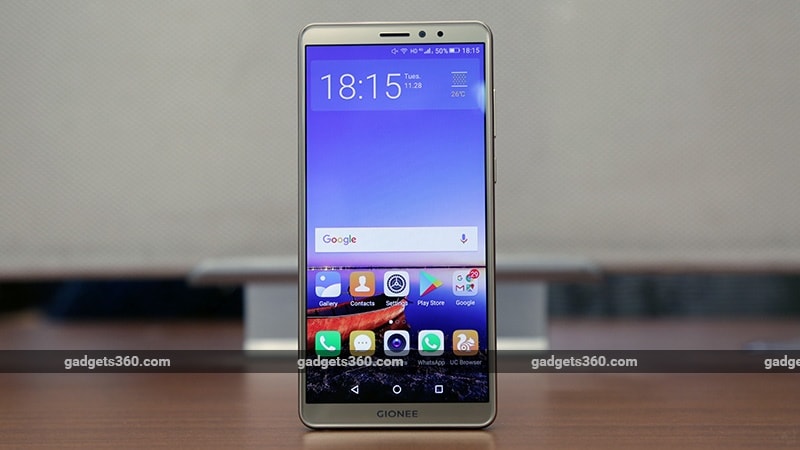 So far in 2017, we have seen a shift in smartphone design, with more and more manufacturers slowly moving towards 18:9 displays. This usually involves narrower borders around a phone's screen, giving it a near bezel-less look. Gionee is the latest to go with the trend, with the Gionee M7 Power. The advantage as a consumer is that you get one more smartphone to choose from in the sub Rs. 20,000 segment.

What is different with this phone in particular, is that it has a big battery as well as a big screen. Gionee’s Power models are well known for their long battery life, and the M7 Power seems to have what it takes to live up to this reputation. We put the Gionee M7 Power to the test to see exactly what it has on offer.

Gionee M7 Power's big 6-inch display has an 18:9 aspect ratio and HD+ resolution of 720x1440 pixels. Gionee has used an IPS panel and so the phone reproduces colours well and has good viewing angles. The tall screen has thin borders on the sides but the top and bottom are relatively thicker. Gionee has used the bottom for its branding, placing the fingerprint scanner at the back and using on-screen navigation buttons. The fingerprint scanner is quick to unlock the device, but we found its positioning - and that of the the volume buttons on the right - a bit too high, which means you may find yourself stretching your fingers.

Gionee has rounded off the corners, while the edges have been chamfered to make this phone easier to grip. Its flat metal back hides a 5000mAh battery, while the plastic caps at the top and the bottom eliminate the need for antenna lines. Thanks to its big battery, the Gionee M7 Power weighs 199g and it will definitely make its presence felt in your hand. The band that runs around the sides is made of plastic but the power and volume buttons have a metallic feel to them.

You get a single speaker positioned alongside the 3.5mm headphone jack and Micro-USB port at the bottom. Gionee has also added an Infrared emitter on the top, which can be used to control compatible appliances.

The Gionee M7 uses a Snapdragon 435 SoC, which has eight Cortex-A53 cores and is known to be efficient. Phones such as the Xiaomi Redmi 4 (Review) and the LG Q6 (Review) are powered by the same processor.  You also get 4GB of RAM and 64GB of internal storage which is expandable by to 256GB using the Hybrid dual-SIM slot. The phone has two Nano-SIM slots, one of which can hold a microSD card as well. There is support for 4G and VoLTE on both SIMs but only one at a time. You get Wi-Fi 802.11 b/g/n, Bluetooth 4.1, and USB-OTG.

Gionee ships its own Amigo 5.0 UI on top of Android Nougat. The UI has been tweaked since we reviewed the Gionee A1 Plus, and the quick settings are now accessible by swiping down from the notification area instead of the iOS-like Command Centre. You don’t get an app drawer and all icons are available right on the homescreen. The settings app is customised to some extent, which might take some time getting used to. All custom features on the M7 Power are grouped separately allowing you to explore them in one go.

Just like older Gionee phones, gesture control is built in, allowing you to double-tap to wake the phone or draw alphabets when the screen is off to launch apps. There is an App Clone option as well, which lets you run two instances of the same app. You can also put the big battery of the M7 Power to use by enabling reverse charging and plug other devices in like you would with a power bank.

Private Space is yet another addition to the software. It lets you hide contacts, messages, notes and call recordings using a separate fingerprint or passcode. This space can be accessed from the lockscreen by using the particular fingerprint, or by doing a two-finger swipe in the aforementioned apps.

There is significant bloatware preinstalled on the phone, including UC News, Xender, Gaana, Messenger, Truecaller, Flipkart and demo versions of a few games. Thankfully, you can uninstall these to free up some space and reduce clutter.

We found the hardware on the M7 Power to be good and did not face any lag or stuttering during the duration of our testing. The processor manages to run apps and games well enough. Having 4GB of RAM is a good advantage and the M7 Power makes the most of it by holding apps in memory when not actively used. Relaunch times are quite good as a result.

The processor isn't exactly entry-level, but it does come in below the options more commonly seen at this price level. We ran Antutu and managed to score 45,682 points, while Geekbench 4's single-core and multi-core tests gave us 679 and 2,590 respectively. During our use, the big battery on the phone went on for a whole day with medium to heavy use with still around 50 percent left at the end. In our HD video loop test, the M7 Power managed to go on for close to 17 hours.

Gionee has equipped the M7 Power with a 13-megapixel rear camera and a single LED flash and an 8-megapixel selfie camera. The camera app is basic and has different shooting modes to choose from. Apart from the usual Photo, Video and Panorama modes there is Face Beauty, Group Selfie and a Card Scanner mode. You also have different settings and a professional mode which lets you individually control different parameters of the camera. The Auto Scene Detection option switches to night mode and toggles HDR automatically based on lighting conditions. Gionee has also added a 2x zoom control in the camera app, which is done digitally.

Photos taken in daylight are sharp and have a good amount of detail, but you can see grain on zooming in. Auto HDR does help in getting better output if you are patient, but we did notice that the phone struggled with metering. Low-light photos are average - the phone manages to keep noise levels low but at the cost of detail.

Selfies are strictly average, and those taken indoors look grainy. The M7 Power has a 3D Photo option which requires you to move the camera around an object to capture it in 3D. These didn’t turn out great and it looked like the phone records a short video while allowing you to scrub through it. Video recording maxes out at 1080p for both the cameras, and you also have the option to record slow-motion video.

Verdict
The Gionee M7 Power is a good smartphone but at Rs. 16,999, it does seem to be overpriced. We were impressed with the battery life, but the UI and the cameras don't live up to the standard set by the competition. Around this price, all rounders like the Moto G5S Plus (Review) or Xiaomi Mi A1 (Review) would be more obvious picks for most buyers. However, if battery life is your number one priority, then the Gionee M7 Power would be a better choice.

Mobile Data Traffic in India to Grow 11 Times by 2023: Ericsson
Ixigo Looks Beyond Chatbots With 'Tara', Its Voice-Based AI-Powered Assistant