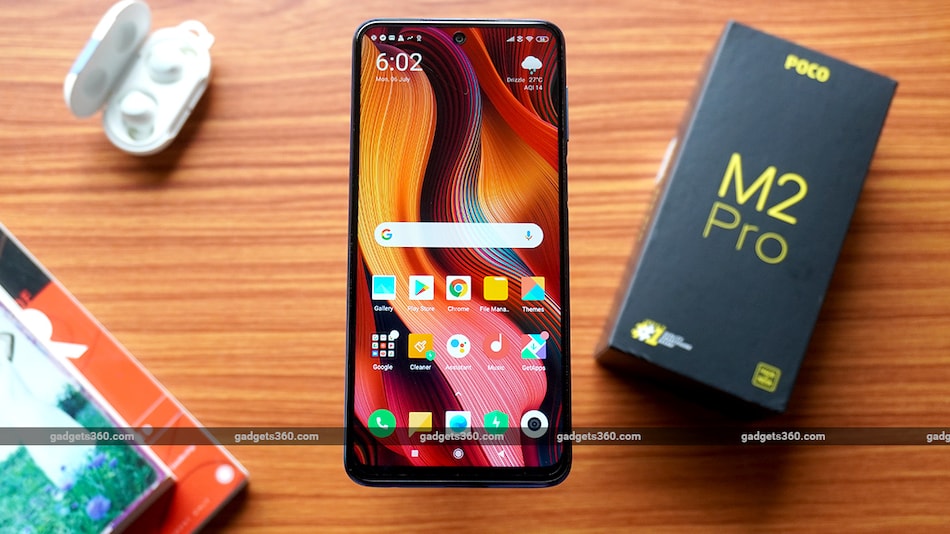 Poco has been very selective about its smartphone portfolio. It was spun off from Xiaomi and launched the Poco X2 (Review), more than a year after the Poco F1 (Review). Rather than releasing ‘flagship killers' such as the F1, the company is now focusing more on the budget segment. With the new Poco M2 Pro, it aims to take on the sub-Rs. 15,000 price segment. Poco says it has seen tremendous success with the X2 and hopes to replicate that formula.

The Poco M2 Pro starts at Rs. 13,999 and looking at its specifications, it seems like it could be a strong opponent to the Redmi Note 9 Pro and Realme 6, which are two excellent offerings with similar pricing. However, numbers on a paper aren't always an accurate depiction of actual performance. It's time to put the Poco M2 Pro to the test, to see if it's as good as it's made out to be.

Poco wants to drive home the fact that the M2 Pro is made in India, with prominent labels on the front and back of the box. While this should certainly appease some people, the bundled charger has a ‘Mi' logo on it and you're greeted by MIUI when you boot up the phone, so make of that what you will.

The Poco M2 Pro has an attractive design and is built well, but it also looks very similar to the Redmi Note 9 Pro (Review). On examining both phones side by side, they appear to have the exact same body. Everything, including the buttons, ports, hole-punch in the display, and the rear camera bump, lines up perfectly. Poco has used a new angular striped pattern on the bottom three-quarters of the phone. The camera module has also had some cosmetic changes. The M2 Pro features a P2i water-repellent coating, which is said to make it splash-proof.

The Poco M2 Pro looks strikingly similar to the Redmi Note 9 Pro, from every angle

The Poco M2 Pro feels a little hefty and large in the hand, but I got used to the weight after a few days. A fingerprint sensor is embedded in the recessed power button, on the right side, and it authenticates you with a simple tap. I do wish the volume buttons were on the opposite side, as they are a little hard to reach. The SIM tray on the left supports two Nano-SIM cards and a microSD card. The headphone jack, USB Type-C port, and speaker are at the bottom, while on the top, we have a secondary microphone and an infrared emitter.

Poco has used a 6.67-inch full-HD+ LCD display, with a cutout for the selfie camera. You also get Gorilla Glass 5 on the front, back, and the rear camera module. I usually find pre-applied screen protectors really annoying, but the one on the M2 Pro is not intrusive. The display gets bright, colours are punchy, and the Settings app lets you tweak the colour profile.

One feature that's missing is a high refresh rate. A 120Hz panel is one of the defining features of the Poco X2, but the lower-cost M2 Pro gets a standard 60Hz display. The reason for this, as I was told by Poco, was that a choice had to be made between fast charging and a high refresh rate, in order to keep the price down. The Realme 6 (Review) continues to have the upper hand amongst phones priced under Rs. 15,000 with its 90Hz display.

Overall, the Poco M2 Pro feels very well built and looks good in blue. It's also available in black and green. In the box, you can expect a silicone case, charger, cable, and SIM eject tool.

The similarities to the Redmi Note 9 Pro continue with the software. The Poco M2 Pro runs on MIUI 11, which is based on Android 10, and my unit had the June security patch. Apart from having the Poco Launcher as a default, the features and functionality are very similar to what you get on Redmi devices. The full suite of Mi apps is present, including Mi Music, Mi Video, Mi Browser, etc, and most of them can't be uninstalled. There are also plenty of third-party apps such as Helo, Facebook, and some basic games, and all of these can be uninstalled.

Despite all the stock MIUI apps, I was surprised to not see any spam messages from them in the notification shade. Certain sections of some apps still push random promoted content, but this can usually be disabled.

MIUI and app performance were superb throughout our review. This is largely thanks to the Qualcomm Snapdragon 720G SoC. It's the same one used in the Redmi Note 9 Pro and Realme 6 Pro. I'm testing the middle variant of the Poco M2 Pro, which has 6GB of LPDDR4X RAM and 64GB of UFS 2.1 storage, and is priced at Rs. 14,999. There's a lower variant with 4GB of RAM and the same amount of storage, which costs Rs. 13,999, and a top-end variant with 6GB of RAM and 128GB of storage priced at Rs. 16,999.

Navigating through MIUI's interface felt snappy, multitasking worked well, and apps in general were quick to load. Gaming performance was very good too. I played the usual heavy-hitters and all ran smoothly with good graphics. I didn't notice any heating issues either, even after playing for long stretches at a time. Game Turbo is a handy utility that gives you shortcuts for screen recording, etc, while playing games.

Videos looked good on the Poco M2 Pro's display. However, the single speaker isn't very impressive. You can enable software enhancements for audio if you use wired headphones, but there's nothing to boost the volume of the speaker.

The Poco M2 Pro has four rear cameras, which include a primary 48-megapixel sensor, an 8-megapixel sensor with a wide-angle lens, a 5-megapixel macro camera, and a 2-megapixel depth camera. You get a 16-megapixel hole-punch selfie camera. The M2 Pro has the same version of the MIUI camera app as the Redmi Note 9 Pro. From what I could tell, the only real difference between the two phones in terms of functionality is that you can use Night mode for the selfie camera on the M2 Pro.

There are some interesting features such as the ability to record full-HD video with the macro camera, and the results were surprisingly good. Pro mode also supports video recording, allowing you to manually set the exposure for a shoot and also the ability to record in LOG format, which can be colour graded later. For what it's worth, the Redmi Note 9 Pro has the exact same features now.

In daylight, the Poco M2 Pro's primary camera captured good-looking photos. Details were generally sharp in landscape shots, and colours were vivid. The Pro colour toggle lets you capture more saturated colours, if needed. Close-ups looked good too, although the camera app brightened colours a bit more than they were in the actual scene. The wide-angle camera produced noticeably weaker colours and details, compared to the main sensor. Portrait mode worked well, and the level of background blur could be adjusted.

In low-light situations, the main and wide-angle cameras struggled with exposure and details. The camera app did a good job of suppressing noise, but the photos generally looked underexposed, and zooming in revealed weak details. Night mode wasn't too effective either, barely doing anything to improve the image.

Selfies shot under bright light looked good. Details and skin textures were generally well represented. Shots were decent, as long as there was enough ambient light around.

The M2 Pro supports video recording at up to 4K 30fps. Videos shot at this resolution had a very warm colour tone, and colours looked quite exaggerated. There's no stabilisation at this resolution. Stepping down to 1080p, videos looked better thanks to stabilisation and colours had a more natural tone. Low-light performance wasn't great, and videos generally looked a bit underexposed and grainy.

Overall, the cameras of the Poco M2 Pro performed decently under good light, but struggled to deliver satisfactory results in low light.

I found the battery life of the Poco M2 Pro to be very good. The 5,000mAh capacity easily lasted for an entire day, even with lots of gaming and camera usage. With lighter workloads, I was able to use the phone well into the second day. The phone also ran for a little more than 17 hours in our HD video loop test, which was good. The bundled 33W fast charger does a good job of quickly charging the battery. I was able to charge this phone to about 95 percent in an hour.

Verdict: Is the Poco M2 Pro worth buying?

I think the Poco M2 Pro is a good addition to the sub-Rs. 15,000 smartphone segment, and I have no trouble recommending it. In a lot of ways, you could think of it as a Redmi Note 9 Pro (Review) with quicker charging at a similar price. Plus, it should be a lot easier to buy compared to Xiaomi's flash sale system. The M2 Pro offers good build quality, a sharp display, solid battery life, and good performance. The cameras are not too bad either, provided you're shooting during the day.

However, unlike the Poco X2 (Review), I don't see the M2 Pro disrupting this price segment simply because it's so similar to the Redmi Note 9 Pro which has been selling here for some time now. The Realme 6 (Review) continues to be a solid alternative, as it's still the only phone with a 90Hz display under Rs. 15,000.

Samsung Galaxy Note 20 Series to Go on Sale From August 21: Report
Black Widow Will ‘Hand the Baton’ to Florence Pugh for MCU’s Future, as Expected