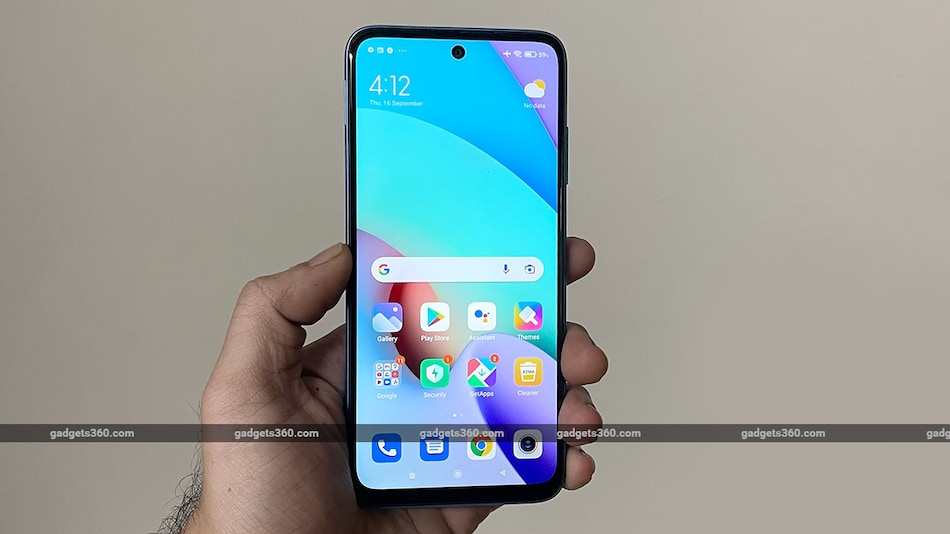 The Redmi 10 Prime is priced starting at Rs. 12,499 in India for the 4GB RAM, 64GB storage variant. You can opt for the higher variant, which costs Rs. 14,499 for 6GB of RAM and 128GB of storage. There are three colour options for the Redmi 10 Prime: Bifrost Blue, Astral White, and Phantom Black.

Xiaomi has stuck with the ‘Evol' design language that it debuted with the Redmi Note 10 series. This design gives the Redmi 10 Prime a familiar look. The smartphone has a big 6.5-inch display with noticeable bezels all around. There's a hole for the selfie camera right in the centre towards the top of the display. The hole is quite big, and some people might find it distracting. Xiaomi has made the frame out of plastic and it is rounded to make the device easy to grip.

The Redmi 10 Prime has a side-mounted fingerprint scanner integrated into the power button on the right side. You'll find the volume buttons above it. I needed a stretch to reach the volume buttons, though the fingerprint scanner was easy to hit. The left side only has the SIM tray. Just like the Redmi 9 Prime, the top and bottom of the frame are flat. The top has a 3.5mm headphone jack, IR emitter, and speaker holes, whereas the USB Type-C port, primary microphone, and loudspeaker are at the bottom.

The back panel is made of plastic as well. The camera module houses four cameras and protrudes a bit causing the device to rock about when kept on a flat surface. I had the Blue Bifrost colour variant which has a nice gradient pattern at the back, but its glossy finish made it a fingerprint magnet. I had to wipe the back frequently to keep it smudge free.

The Redmi 10 Prime is among very few current smartphones powered by the MediaTek Helio G88 SoC. Xiaomi has matched it with either 4GB or 6GB of RAM depending on the variant you choose. These variants offer 64GB and 128GB of storage respectively. You now have the option to use part of the storage to extend RAM by 1GB on the base variant whereas the higher variant allows 2GB.

The 6.5-inch display has a full-HD+ resolution with a 90Hz refresh rate and Corning Gorilla Glass 3. The display is set to 60Hz by default but you can switch it to 90Hz in the display settings. Xiaomi says that the smartphone uses an adaptive refresh rate and can go down to 45Hz when screen content is static, 60Hz while streaming video, and 90Hz while scrolling or gaming, to optimise power consumption.

Xiaomi has used a big 6,000mAh battery for the Redmi 10 Prime. You get a 22.5W charger in the box but the device is only capable of charging at 18W. There is also support for 9W reverse charging, so you can use this phone as a power bank to top up other devices. The Redmi 10 Prime is a dual-SIM device and has support for 4G as well as VoLTE on both SIMs. It also has a dedicated microSD card slot for storage expansion. Connectivity options include Bluetooth 5.1, dual-band Wi-Fi, and four satellite navigation systems.

You get MIUI 12.5 on top of Android 11, and my unit was running the July Android security patch. There are a number of preinstalled apps on the smartphone, such as Amazon, Facebook, Prime Video, LinkedIn, Mi Credit, and Netflix. These apps can be uninstalled, which is a move in the right direction for Xiaomi. GetApps, an alternative to the Play Store also comes preinstalled, and it did send a few push notifications during the review period. The UI on the Redmi 10 Prime is easy to use, and scrolling through the menus did seem smooth. Some of Xiaomi's other features such as Game Turbo, Second Space, Lite Mode, which we've seen on previous devices, can also be found here.

The Redmi 10 Prime has a good display which got bright enough for indoor use, in my experience. The stereo speakers are loud and make watching videos and playing games a bit more engaging. The sound is hollow at higher volumes but this is acceptable at this price point. I found the side-mounted fingerprint scanner to be quick to unlock the device, needing only a single attempt most of the time.

I had the 6GB RAM variant which was quick to load apps, and multitasking between apps was easy. I ran benchmark tests to see how the Redmi 10 Prime performed. In the AnTuTu benchmark, the phone managed 245,744 points. It managed 8,375 in PCMark Work 3.0, while in Geekbench 5, it scored 365 and 1,174 in the single-core and multi-core tests respectively. The Redmi 10 Prime also managed 40fps in GFXBench's T-Rex test and 8.6fps in the Car Chase test.

The Redmi 10 Prime has a quad-camera setup

I played BGMI (Battegrounds Mobile India) on the Redmi 10 Prime, and it defaulted to the HD and High setting for graphics and frame rate respectively. The game was playable at these settings and I did not notice any lag or stutter. After about 30 minutes, the phone was slightly warm to the touch and showed a 9 percent battery drain.

The big 6,000mAh battery is big enough to handle over a day and a half of use without any issues. In our HD video loop test, the phone went on for 16 hours, 24 minutes. Charging using the supplied charger at 18W got the smartphone to 24 percent in 30 minutes and 50 percent in an hour.

The Redmi 10 Prime packs in a quad-camera setup consisting of a 50-megapixel primary camera, an 8-megapixel ultra-wide-angle camera, a 2-megapixel macro camera, and a 2-megapixel depth sensor. The camera app is pretty much unchanged from what we've seen on recent Xiaomi phones. There are quick toggles for HDR as well as AI, and there is a Pro mode that gives you complete control over settings.

Most of the photos I shot with the Redmi 10 Prime were in overcast conditions. Photos shot in the day came out looking decent with average details. These were oversharpened and did not appeal to me much. The edges of the frames were also slightly grainy. With the ultra-wide-angle camera you can shoot a wider frame but I found the output to be a step down in terms of quality compared to the primary sensor. The output also had slight distortion at the edges.

Close-up shots had good detail, and the AI when enabled was quick to detect what the smartphone was pointed towards. Colours were fairly accurate and the phone could differentiate between the subject and the background to produce a depth effect. Portrait shots had good edge detection and the phone could blur the background effectively. You also get the option to set the level of blur before taking a shot. Macros had decent details but I found myself adjusting the frame to avoid having the phone's own shadow fall on the subject while shooting. The output is limited to 2 megapixels.

Low-light camera performance was strictly average. Shots appeared dark and details were missing. With the AI enabled there is a slight improvement in performance but nothing drastic. Night mode produces slightly brighter images but still without the best details.

Selfies taken with the 8-megapixel front camera were acceptable in daylight. The output also seemed sharpened, with blacks bumped up aggressively. Portrait shots had good edge detection and the phone managed adequate background blur in daylight. Low-light selfies shot under a street lamp turned out to be below average, while others taken with a brighter light source nearby were okay.

Video recording tops out at 1080p for the primary camera as well as the selfie shooter. Footage wasn't well stabilised while shooting in daylight or during the night.

The Redmi 10 Prime boasts of better hardware than the Redmi 9 Prime but commands a higher price as well. While it does offer better performance than its predecessor, the cameras are lacking. You get a high-refresh-rate panel and a big 6,000mAh battery which should benefit casual users. At its starting price of Rs. 12,499, this phone will have to compete with the Realme 8i which has better specifications on paper (we'll review it soon). The higher priced variant of the Redmi 10 Prime is priced around the same as the Redmi Note 10S (Review) and Redmi 10T 5G (Review), both of which offer better hardware.

How Foundation’s New Emperor Cleon Clones — Dawn, Day, and Dusk — Came to Be
Oppo Cuts 20 Percent of Staff After Going Up Against Apple