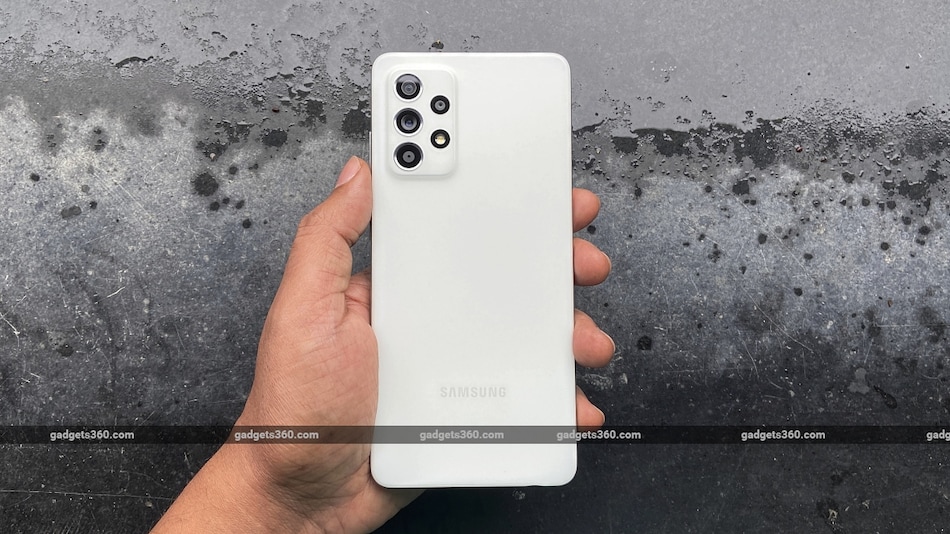 Samsung's recent mid-range Galaxy A-series phones have been more about design and features than power and performance. The Galaxy A52 (Review) definitely looked the part as a mid-range smartphone, but fell a bit short in terms of performance when compared to the competition. With the new Galaxy A52s, Samsung has swapped the Qualcomm Snapdragon 720G SoC for the higher-endSnapdragon 778G. This also means that the Galaxy A52s supports 5G. Will this be enough to take on more recently launched smartphones such as the Realme GT Master Edition and the Realme GT, both of which have competitive price tags? I have been using the Samsung Galaxy A52s for a few hours, and here are my first impressions.

The Samsung Galaxy A52s is a mid-year upgrade to the Galaxy A52, which was launched in March this year. The Galaxy A52s is priced at Rs. 35,999 in India for the base 6GB RAM and 128GB storage variant. There's an 8GB RAM variant with the same amount of storage, priced at Rs. 37,499. Interestingly, both variants are currently selling for around Rs. 33,990 on Amazon as of now. I received the 8GB RAM variant of this smartphone in the Awesome White finish for review. It's also available in Awesome Black and Awesome Violet.

In terms of design, the Galaxy A52s looks identical to the Galaxy A52. It has a plastic frame and a polycarbonate back panel. The matte-finished back panel looks somewhat premium. The camera layout looks quite modern and minimalist with the cutouts for the camera lenses being prominent, while the rest of the module blends in with the back.

There's a 6.5-inch full-HD+ Super AMOLED display with a hole-punch cutout for the selfie camera. The display's refresh rate gets bumped up to 120Hz from the Galaxy A52's 90Hz, which should appeal to gamers. Its bezels appear thinner on the sides than at the top and the bottom edges. The Galaxy A52s has a stereo speaker setup, with the earpiece doubling up as the secondary speaker. Next to the USB Type-C port at the bottom, there's also a 3.5mm headphone jack. This phone has an IP67 rating for dust and water resistance, like the Galaxy A52.

Nothing has changed in terms of the camera specifications. There's a primary 64-megapixel camera with optical image stabilisation (OIS), a 12-megapixel ultra-wide-angle camera, a 5-megapixel macro camera, and a 5-megapixel depth sensor. Selfies are handled by a 32-megapixel front camera. The Galaxy A52s has a 4,500mAh battery which supports 25W fast charging. However, like the Galaxy A52, there's only a 15W charger in the box. The phone runs One UI 3.0 which is based on Android 11.

Given its hardware, the Samsung Galaxy A52s seems like a solid contender that's placed between the higher end of the mid-range segment and the lower end of the premium segment. Priced starting from Rs. 35,999 in India for the base 6GB RAM variant, the Galaxy A52 seems to have a lot going for it including the updated processor, stereo speakers, modern design, and IP67 rating.

Qualcomm's fresh and new Snapdragon 778G is a good performer, as we have seen with the Realme GT Master Edition (Review) (from Rs. 25,999 onwards) and gives the A52s a much-need performance bump along with 5G capabilities. However, with the Realme GT (First Impressions) offering a top-of-the-line Qualcomm Snapdragon 888 processor, and several other compelling options such as the OnePlus 9R (Review) and Xiaomi Mi 11X Pro (Review) also priced under Rs. 40,000, Samsung still appears to be targeting those who prioritise design. So, a lot depends on how the Galaxy A52s's cameras perform and whether they match up to the quality you can get from competing low-cost premium devices. This is one of the things I will test in detail, so stay tuned for the full review of the Samsung Galaxy A52s, which should be out soon.