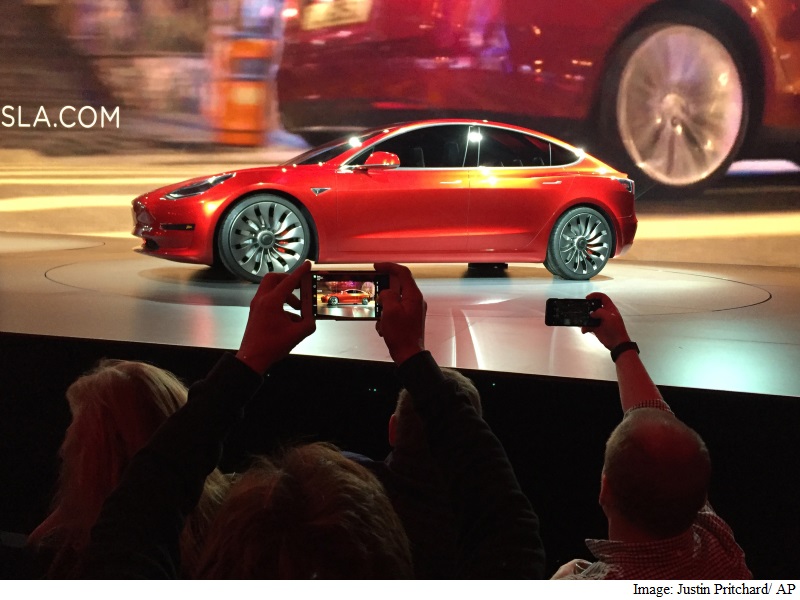 Demand for Tesla Motors' new lower-priced electric car surprised even the company's CEO Friday as 198,000 people plunked down $1,000 deposits to reserve their vehicles.

Musk unveiled the car Thursday night at a design studio near Los Angeles. It starts at $35,000 (roughly Rs. 23 lakhs) and has a range of 215 miles per charge, which is far more than most people drive each day.

The orders came from across the globe even though the car isn't scheduled for sale until late in 2017. But they could jeopardize a $7,500 US electric car tax credit that many buyers are counting on to reduce the price. The tax credits gradually phase out after a company hits 200,000 in US sales.

A Tesla spokeswoman wouldn't say how many of the 198,000 orders came from the US.

Thursday night, Musk said Tesla had 115,000 orders since the company started taking them earlier in the day in Australia. There were long lines at Tesla stores from Hong Kong to Austin, Texas, reminiscent of crowds at Apple stores for early models of the iPhone. But the number kept rising into Friday.

"Thought it would slow way down today, but Model 3 order count is now at 198k," Musk tweeted during the afternoon, saying the wait time for the car is "growing rapidly."

The news pushed Tesla shares to a Friday closing price of $237.59, up 3.4 percent from Thursday.

The Model 3 is less than half the cost of Tesla's previous models, and its range is about double what drivers get from current competitors in its price range, such as the Nissan Leaf and BMW i3.

On Twitter, Musk estimated that the average selling price of a Model 3 with options would be around $42,000. So the sales would bring more than $8.3 billion (roughly Rs. 54,970 crores) in revenue to Tesla.

Prototypes looked like a shorter version of Tesla's Model S sedan. The Model 3 has a panoramic glass roof and an elongated hood. Inside, it seats five and has the same large touchscreen dashboard as other Teslas. It also has Tesla's suite of semi-autonomous driving features, including automatic lane changing and lane keeping. Musk said it will accelerate from zero to 60 in less than 6 seconds.

Tesla has a history of missing deadlines for its vehicles to hit the market, but Musk said Thursday that he feels "fairly confident" that the Model 3 will come out next year.

The lower-priced car is the most serious test yet of 13-year-old Tesla's ability to go from niche player to a full-fledged automaker. It could be the car that finally makes electrics mainstream - or consumers could continue to be skeptical that electrics will work for everyday use. In the US, they still make up less than 1 percent of annual sales. Either way, the Model 3 is already changing the industry, spurring competitors to speed development of electric cars.

(Also see:  Here's a Tesla Car You Can Actually Afford and Give to Your Kids)

General Motors Co. is set to start selling the Chevrolet Bolt electric car at the end of this year with a similar price tag and a 200-mile range. Hyundai's Ioniq, which has a 110-mile electric range and could match Tesla on price, goes on sale this fall. Audi will follow with an electric SUV in 2018.

The orders show there's real, underlying demand for reasonably priced electric cars with high range, says Edmunds.com senior analyst Jessica Caldwell. Customers put down $1,000 knowing that they'll probably have to wait two years to get their cars, leading Caldwell to believe it's more about the cultural phenomenon of Tesla.

"You're not seeing people wait in long lines to purchase a Chevy Bolt, considering it comes out much sooner and the range is about the same," she said.

During his Thursday night presentation, Musk gave details on how electric cars can fit into people's lives, she said. "You felt like the lifestyle was attainable in his talk," she said.

Will Apple's FBI Tussle Take a Bite Out of the Brand?
FBI Assures It Will Help Authorities Unlock Devices When Allowed by Law