This observation was part of a Hubble mosaic of the Orion Nebula, which was created from 520 images taken by the space telescope. 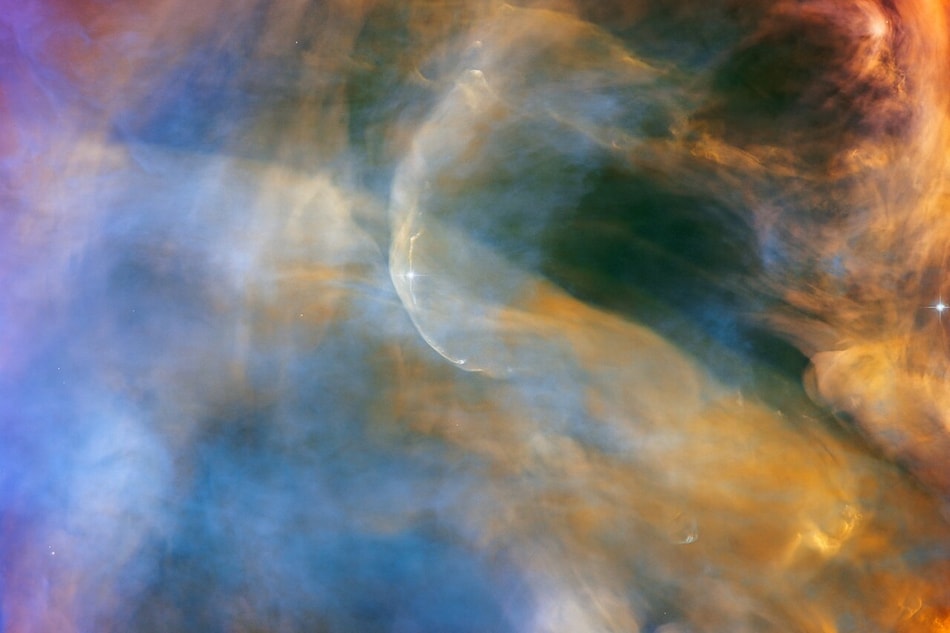 In a detailed astronomical image, NASA's Hubble Space Telescope has captured a region of colourful dust and gas clouds encircling an HH 505 or a Herbig-Haro object in the Orion Nebula. Herbig-Haro objects, which are bright regions surrounding young stars, are created when stellar winds or jets of gas emitted by these stars collide violently with neighbouring gas and dust. In the instance of HH 505, these outflows come from the star IX Ori, which is located around 1,000 light-years from Earth on the edges of the Orion Nebula. The Orion Nebula's large-scale outflow of gas and dust interacts with the outflows themselves, which are seen as curved structures at the top and bottom of this image.

This interaction causes the outflows to be twisted into sinuous curves. In order to better understand the characteristics of outflows and protoplanetary discs, astronomers using Hubble's Advanced Camera for Surveys (ACS) made this discovery.

Bright, new stars spew powerful UV radiation into the Orion Nebula. Hubble can clearly see the shockwaves created by the outflows, but this radiation also draws attention to the slower-moving stellar material currents. This enables astronomers to see jets and outflows up close and understand their structures.

The Hubble Space Telescope is a joint international project between NASA and the European Space Agency (ESA). The ESA shared the detailed astronomical image on its website.

This observation was part of a Hubble mosaic of the Orion Nebula, which was created from 520 images taken by the space telescope, in five different colours and is the finest image of the region ever.

From the enormous, young stars forming the Orion Nebula to the pillars of dense gas that may serve as the homes of developing stars, it's a picture book of star creation. The four largest stars in the nebula are found in its core region. Because of the way the stars are organised, they are known as the Trapezium. These stars' ultraviolet radiation interrupts the formation of hundreds of lesser stars and cuts a hole in the nebula.

The nebula is also the region closest to the Earth where stars develop.