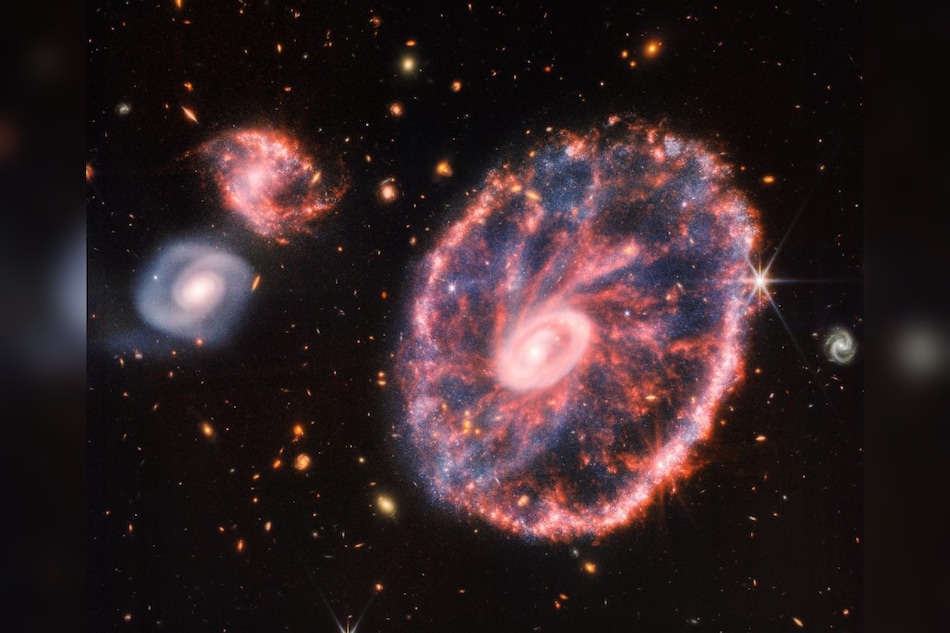 An image of the Cartwheel Galaxy, captured by the James Webb Telescope

The James Webb Space Telescope has peered through time and huge amounts of dust to capture a new image of the Cartwheel Galaxy, revealing the spinning ring of colour in unprecedented clarity, NASA and the European Space Agency said Tuesday. Located around 500 million light-years from Earth in the constellation Sculptor, the Cartwheel gained its shape during a spectacular head-on collision between two galaxies.

The impact sent two rings expanding from the galaxy's centre, "like ripples in a pond after a stone is tossed into it", NASA and the ESA said in a joint statement.

A smaller white ring remains closer to the galaxy's centre, while the outer ring, with its spokes of colour, has been expanding into the universe for around 440 million years, the statement added.

As the outer ring expands it runs into gas, sparking the formation of new stars.

The Hubble telescope had previously captured images of the rare ring galaxy, which is believed to have been a spiral galaxy like our own Milky Way before it was hit by a smaller intruder galaxy.

But the Webb telescope, which launched in December 2021 and revealed its first images to global fanfare last month, has a far greater reach.

Webb's ability to detect infrared light allowed it to see through the "tremendous amount of hot dust" obscuring the view of the Cartwheel Galaxy, NASA and the ESA said.

This revealed new details about star formation in the galaxy, as well as the behaviour of the supermassive black hole at its heart, they said.

It was also able to detect regions rich in hydrocarbons and other chemicals, as well as dust that is similar to dust on Earth.

Behind the Cartwheel, two smaller galaxies shine brightly, while even more galaxies can be seen behind them.

The observations show that the Cartwheel Galaxy is still in "very transitory stage", the space agencies said.

"While Webb gives us a snapshot of the current state of the Cartwheel, it also provides insight into what happened to this galaxy in the past and how it will evolve in the future."