Can Humans Ever Understand What Sperm Whales say? This Research Has Roadmap Towards It 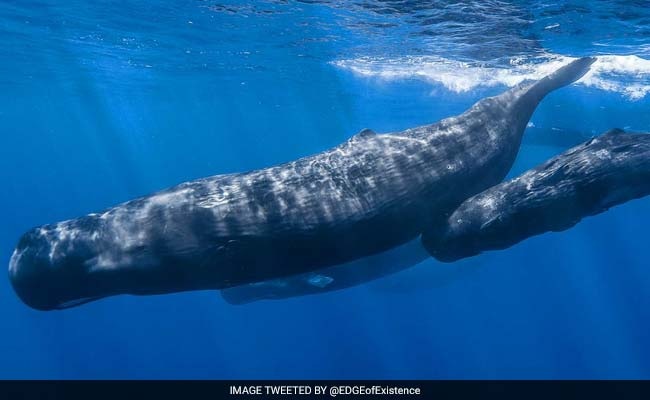 A new paper titled, ‘Cetacean Translation Initiative: a roadmap to deciphering the communication of sperm whales', explains how the scientists are going to try to decode whale vocalisations. The researchers are using machine learning techniques to try and translate the clicking and other noises made by sperm whales, to see if we can understand what the giant creatures are saying.

“Whether known non-human communication systems exhibit similarly rich structure — either of the same kind as human languages, or completely new — remains an open question,” reads the concluding sentence in the introduction of the paper, posted on to the preprint server arXiv.org. The paper has been authored by 16 scientific members of Project CETI collaboration.

It was only in the 1950s that we, humans, observed sperm whales made sounds. It took another two decades to understand for humans that they were using those sounds to communicate, according to the new research posted by CETI.

Researchers say that the past decade witnessed a ground-breaking rise of machine learning for human language analysis, and recent research has shown the promise that such tools may also be used for analysing acoustic communication in nonhuman species.

"We posit that the machine learning will be the cornerstone of the future collection, processing, and analysis of multimodal streams of data in animal communication studies," read the abstract of the paper.

And to further understand this, scientists have picked sperm whales, for their highly-developed neuroanatomical features, cognitive abilities, social structures, and discrete click-based encoding, making for an excellent starting point for advanced machine learning tools that can be applied to other animals in the future.

The paper is basically a roadmap towards this goal, they add. Scientists have outlined key elements needed for the collection and processing of massive bioacoustics data of sperm whales, detecting their basic communication units and language-like higher-level structures, and validating these models through interactive playback experiments.

They further say that technological advancements achieved during this effort are expected to help in the application of broader communities investigating non-human communication and animal behavioural research.

Researchers explain that the clicking sound sperm whales make, it appears, serves the dual purpose of echolocation at the depths to which they go and also use it in their social vocalisations. The communication clicks are more tightly packed, according to the CETI paper.

That a project as large as this one would have complexities and challenges is something not very difficult to understand.

David Gruber, a marine biologist, and CETI project leader said that figuring out what they have been able to discover thus far has been challenging, adding, sperm whales have "been so hard for humans to study for so many years." But now, "we actually do have the tools to be able to look at this more in-depth in a way that we haven't been able to before," he said adding, tools included AI, robotics, and drones.

A report in Live Science said that the CETI project has a massive stash of recordings of about 1 lakh sperm whale clicks, painstakingly gathered by marine biologists over many years. However, it said that the machine-learning algorithms might need somewhere close to 4 billion clicks before they start making any conclusions.

And to ensure this, CETI is setting up innumerable automated channels to collect recordings from sperm whales. The tools CETI is using include underwater microphones placed in waters frequented by sperm whales, microphones that can be dropped by eagle-eyed airborne drones as soon as they spot a pod of sperm whales gathering at the surface, and even robotic fish that can follow and listen to whales from a distance, the report said.

If you think collecting these sounds is the only challenge, then wait. According to a 2016 research in the journal Royal Society Open Science, sperm whales are known to have dialects as well. But finding answers to these questions is what CETI is dedicated to.