Sunspot AR3038 lies slightly to the north of the Sun's equator. 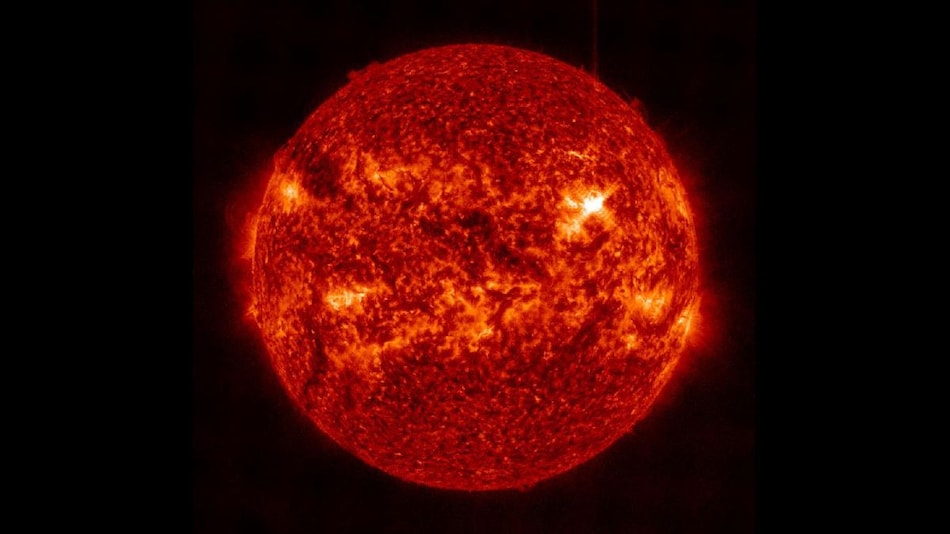 The sunspot is 2.5 times the size of Earth

Sunspots are a curious case for many scientists. It is especially so if the sunspot shows rapid growth in its diameter. A sunspot, called AR3038, grew to almost twice the size of Earth. In the span of 24 hours, its diameter swelled to double its own size. The sunspot is 2.5 times the size of Earth and is facing directly at our planet. It is roughly 19,800 miles, or 31,900 kilometres, in diameter. The difference in its size was recorded from Sunday (June 19) to Monday night (June 20), as reported by Spaceweather.com, which is a website tracking the activity of geomagnetic storms, solar flares and other cosmic weather events.

Dark areas on the Sun's surface known as sunspots are where strong magnetic fields, produced by the flow of electric charges from the Sun's plasma, knot before abruptly snapping. The energy that is released as a result causes coronal mass ejections (CMEs), which are explosive jets of solar material, and solar flares, which are radiation bursts.

The Spaceweather.com report stated, “Yesterday, sunspot AR3038 was big. Today, it's enormous. The fast-growing sunspot has doubled in size in only 24 hours. AR3038 has an unstable 'beta-gamma' magnetic field that harbors energy for M-class [medium-sized] solar flares, and it is directly facing Earth.”

Sunspot AR3038 lies slightly to the north of the Sun's equator. If sunspots face the Earth from near the sun's equator, it takes nearly two weeks for it to travel across the Sun so that it no longer faces the Earth.

Studying these sunspots is important as it gives insight into the working of solar flares. When a solar flare hits Earth's upper atmosphere, X-rays and ultraviolet radiations ionise atoms. These can also cause so-called radio blackouts in areas of Earth that are lit by the Sun when the flare hits the atmosphere.

Blackouts that occur during a flare are rated from R1 to R5, with R5 being the most severe.

A recent Live Science report stated that two solar flares in April and May induced R3 blackouts over the Atlantic Ocean, Australia, and Asia. Solar flares typically travel 93 million miles in average distance yet only take eight minutes to reach us since they travel at the speed of light (150 million kilometres).