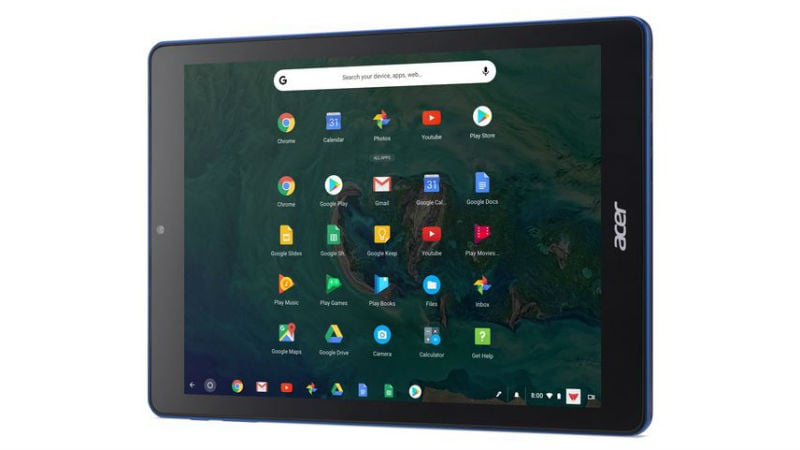 Acer on Monday launched Chromebook Tab 10 - the first tablet to run Chrome OS. While Apple is expected to unveil its latest lineup of iPad models on Tuesday, the Chromebook Tab 10 is here to take them on. Apple has scheduled an event on March 27 where it will launch education-focused iPad models to rival Chromebooks. The Chrome OS currently runs on laptops, desktops, and convertibles but Acer is the first company to bring a tablet running on the operating system. The Acer tablet will be released in April and has been priced at $329 (roughly Rs. 21,300).

The Acer Chromebook Tab 10 sports a 9.7-inch (2048x1536 pixels) display, similar to the 9.7-inch iPad. It is powered by an OP1 processor coupled with 4GB of RAM. The tablet has 5-megapixel camera on the rear and a 2-megapixel camera on the front and the onboard storage is 32GB. It is fuelled by a battery that claims to provide 9 hours of playtime. In terms of connectivity, it has Wi-Fi, USB Type-C port, 3.5mm headphone jack, and Bluetooth v4.1 as connectivity options.

Interestingly, the Acer Chromebook Tab 10 comes with a Wacom EMR Stylus, which can be embedded in a slot and does not require charging. Additionally, the rear camera in the tablet will soon get Google's Expeditions AR for classroom learning, Google claims in a blog post. It says, "Coming soon, teachers can take students on Google Expeditions to the Great Barrier Reef, the Colosseum, and even to the International Space Station—all from the screens of their Chrome devices."

Notably, the tablet is compatible with Google Play, from where students can download Android apps. Acer will sell the Chromebook Tab 10 to the public but it is actually targetting the device at the education market. As mentioned, the laptop will go on sale with prices starting at $329 and will initially be available in North America. However, it will go on sale in EMEA (Europe, the Middle East and Africa) from May this year.