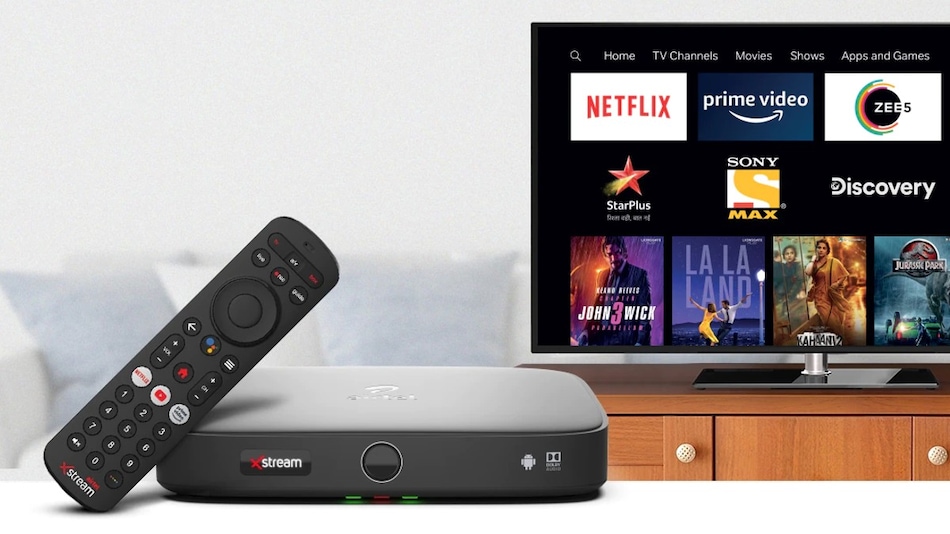 Airtel Xstream Box was launched back in September 2019

Airtel Xstream Box price has been reduced by Rs. 499 to Rs. 2,000. The revised pricing is notably applicable to customers getting new Airtel Digital TV connections along with the Xstream Box option. The direct-to-home (DTH) set-top box now also comes bundled with free access to over-the-top (OTT) apps, including Amazon Prime Video and Disney+ Hotstar. Originally, Airtel introduced the Xstream Box alongside the Xstream Stick back in September 2019. Both devices came with a price tag of Rs. 3,999.

The Airtel site is showing that the Airtel Xstream Box price has been reduced to Rs. 2,000. The box was earlier available at Rs. 2,499, as per the details appearing on Internet archives.

In addition to the reduced pricing, Airtel is offering free access to Disney+ Hotstar, Amazon Prime Video, SonyLIV, Eros Now, Hungama, and other OTT apps for customers getting the new Xstream Box.

According to a report by DTH-focussed site DreamDTH, the reduced pricing is applicable for new connection requests via the Airtel site as well as through authorised dealers.

The bundled benefits include one-year of Disney+ Hotstar, three months of Amazon Prime Video, SonyLIV, Eros Now, and Hungama, among other apps, the report said.

Gadgets 360 reached out to Airtel for clarity on the Xstream Box price cut and bundled benefits, and the telco responded by saying that this is a limited-period offer. Airtel, however, did not clarify for how long the offer will remain in place for customers. This report will be updated when we get further details.

The Xstream Box runs on Android 9.0 Pie-based Android TV OS and has preloaded Google Play to offer access to over 5,000 apps and games. It also comes with Chromecast support for streaming content from your smartphone.

Alongside offering OTT support, Airtel's Xstream Box works with usual DTH services. Users notably need to keep their Airtel DTH account recharged with a minimum monthly amount of Rs. 153 to get access to both OTT content and DTH services.

Last month, Airtel launched its Xstream Premium service to offer access to 15 Indian and global OTT platforms under one roof. It starts at Rs. 149 a month or Rs. 1,499 a year.