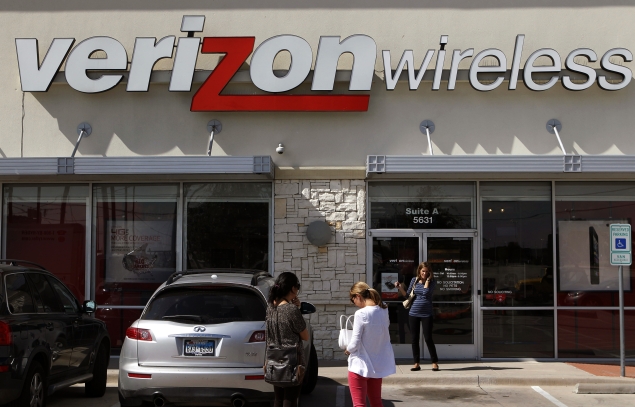 Verizon Communications Inc posted a higher-than-expected quarterly profit on the performance of its wireless business, which reined in costs without slowing growth.

Verizon also ramped up the pressure on Vodafone Group Plc, which owns 45 percent of the Verizon Wireless unit. Verizon has been seeking to buy that stake and take full control of the top U.S. mobile company.

During the quarter Verizon Wireless was helped by lower costs and the popularity of its data share plans, under which subscribers can more easily add cellular service to devices like tablets. That represent lower costs for Verizon than smartphones such as Apple Inc's iPhone.

"It just feels like they're tightening the circle around their customers," Evercore analyst Jonathan Schildkraut said, referring to Verizon's ability to retain customers and add more devices through its data share plans.

Schildkraut said investors were equally excited about Verizon's comment that it was "extremely confident" it could buy Vodafone's stake in the wireless unit without major tax implications for Vodafone shareholders.

The tax question is seen by some analysts as one of the biggest barriers to a deal. Vodafone declined to comment.

"We actually are confident that in such a transaction we've a structure that could be created in a very tax efficient manner," Verizon Chief Financial Officer Fran Shammo told Reuters.

Guggenheim analyst Shing Yin said Shammo did not appear to be indicating a deal was imminent but making a public plea to Vodafone to sell the stake by contradicting the tax worries.

"I see that as putting a little bit of pressure on Vodafone to do something," Yin said.

Shammo said that Verizon's long-stated desire to buy the rest of the wireless venture had not changed. Earlier this month, Verizon denied it had any intention of buying Vodafone outright as a way to gain control of the wireless business.

Subscriber strength
Verizon Wireless added 677,000 retail subscribers in the first quarter, slightly higher than Wall Street expectations for about 634,000, according to eight analysts contacted by Reuters.

The operator said its wireless service margin of 50.4 percent based on earnings before interest, taxes, depreciation and amortization was a record high. Expectations had ranged from 48.5 percent to 49.9 percent, according to four analysts polled by Reuters.

In comparison, its biggest rival AT&T Inc, which reports first-quarter 2013 results on April 23, posted a wireless margin of 41.6 percent in the year-ago quarter.

Verizon also stuck by its previous forecast for a full-year 2013 wireless margin of 49 percent to 50 percent.

"They clearly had very good cost control on wireless. The lower upgrades helped but it looked like they were also able to get cost out of the network," said Guggenheim's Yin.

Growth in TV, phones
While Verizon activated 4 million iPhones in the quarter, up from 3.2 million in the year-ago quarter, it said that half of those activations were for older, cheaper iPhones. Apple shares have been sliding on fears of weakening demand for the iPhone.

On the plus side for Apple, though, its share of Verizon's smartphone activations rose to 56 percent from about 51 percent in the year-ago quarter, according to Guggenheim's Yin.

"Across the board subscriber numbers in both wireline and wireless looked pretty good," said Rethemeier.

Verizon's Shammo also confirmed that Verizon had put in an offer to Clearwire Corp to buy wireless airwaves in a bid to expand capacity.