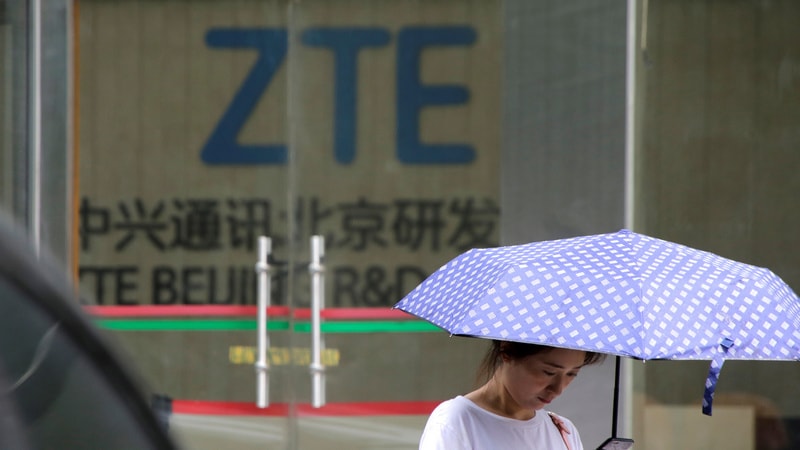 The United States said on Wednesday that it signed an agreement with ZTE Corp that paves the way for the Chinese tech company to resume operations after a nearly three-month ban on doing business with American suppliers.

The ban on China's No. 2 telecommunications equipment maker will be removed once the company deposits $400 million (roughly Rs. 2,700 crores) in an escrow account, the US Commerce Department said in a statement announcing that an escrow agreement had been signed.

The ban, which was imposed in April and caused ZTE to cease major operations, has been a source of friction between Washington and Beijing, which are engaged in an escalating trade dispute.

ZTE did not immediately respond to a request for comment.

The escrow agreement is part of a $1.4 billion (roughly Rs. 9,600 crores) settlement ZTE reached with the Commerce Department last month to regain access to US suppliers, whose components it relies on for its smartphones and networking gear.

The ban was imposed after ZTE broke an agreement reached after ZTE pleaded guilty in US federal court last year for illegally shipping US goods and technology to Iran, in violation of US sanctions.

Once the ban is lifted, ZTE, which employs around 80,000 people, is expected to restart major operations. The reprieve for ZTE coincides with a new Trump administration threat of 10 percent tariffs on $200 billion (roughly Rs. 13.7 lakh crores) of Chinese goods.

In its statement, the Commerce Department said the ZTE action is a law enforcement matter unrelated to broader discussions of trade policy.

"The ZTE settlement represents the toughest penalty and strictest compliance regime the department has ever imposed in such a case," the Commerce Department said.

US President Donald Trump tweeted in May that he had closed down ZTE and then let it reopen, although no agreement to lift the ban had yet been reached. He said he was working with Chinese President Xi Jinping to give ZTE "a way to get back into business, fast."

ZTE had said the ban threatened its survival. White House trade adviser Peter Navarro said last month that Trump decided to allow ZTE to again buy US parts and components as a personal favour to Xi to show good will for bigger efforts. US suppliers have been anxious to resume business since US Commerce Secretary Wilbur Ross announced the settlement on June 7.

ZTE paid over 200 US companies more than $2.3 billion in 2017, including Qualcomm Inc , Intel Corp , Broadcom Inc and Texas Instruments Inc . Shares of smaller US suppliers, which are more dependent on ZTE, pared losses after the news, including optical component makers Acacia Communications Inc , Oclaro Inc and Lumentum Holdings Inc . ZTE's shares were suspended for almost two months after the ban was imposed and have lost about half their value.

The company last week received a limited one-month reprieve from the Commerce Department to maintain existing networks and equipment.

Under the new settlement, ZTE was required to change its board and management within 30 days. It also will operate for the next 10 years under a suspended ban. The current ban could have lasted up to seven years.

In addition, the company must hire an outside compliance monitor selected by the Commerce Department. The department missed a 30-day deadline to choose the monitor, but said on Wednesday the timetable was adjusted to conduct "due diligence."

A controversial monitor appointed to a three-year term by a federal judge in Texas as part of last year's guilty plea already is in place.

ZTE also agreed to allow the US government unfettered site visits to verify US components are being used as claimed by ZTE, and to post calculations of the US components in its products on its website in Chinese and English.

Members of the US Senate last month urged Trump to reconsider the settlement, saying that ZTE posed "a significant threat" to national security.

The Senate paved the way for a showdown with Trump over the issue last month, when it passed an annual defense policy bill including an amendment attempting to reverse the deal. The measure could still be killed when Senate and House of Representatives meet in the coming weeks to forge a compromise version of the bill.

Chuck Schumer, the Senate's top Democrat, on Wednesday called the ZTE deal "awful" and said it would "undermine our national and economic security." He said he hopes his Republican colleagues in the House and Senate will "maintain the Senate's strong language in the defence bill."

Reuters revealed on June 5 that ZTE had signed a preliminary agreement with the Commerce Department, along with the fine and other terms. It also broke news of the ban in April.

A US investigation into ZTE was launched after Reuters reported in 2012 the company had signed contracts to ship hardware and software worth millions of dollars to Iran from some of the best-known US technology companies.