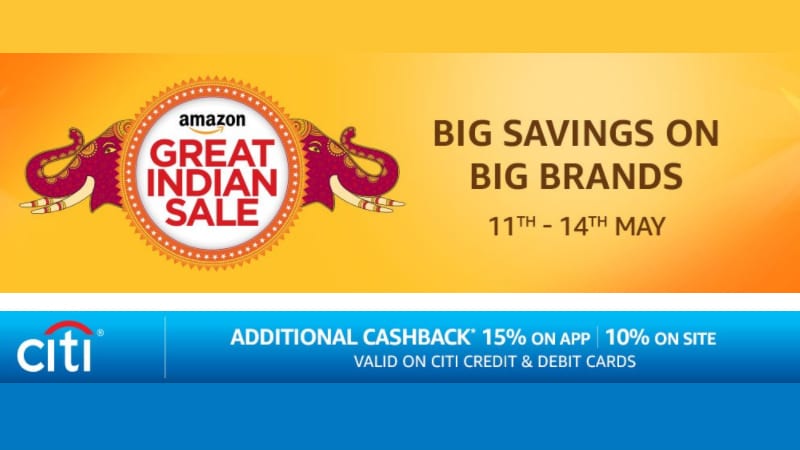 Flipkart and Amazon have both announced major sales to be held this month, and hinted at some of the specific offers that they hope to tempt buyers with. Amazon's Great Indian Sale will take place from May 11 to 14, while Flipkart will celebrate its 10th anniversary with a Big 10 Sale that starts on May 14 and continues till the 18th of the month. This means that buyers have an extended period during which some great deals might be available, but they will not be able to compare between the two and choose the better offer.

Amazon is touting up to 18 percent off on Samsung smartphones, up to 40 percent off on Moto models, and exchange offers for OnePlus phones. Amazon's own Kindle Paperwhite will sell for Rs. 2,000 less than usual, and there will be a discount on Kindle Unlimited subscriptions as well. Amazon will also be running contests during this period - customers could win Rs. 1 lakh per hour and stand a chance to win an iPhone 7 (Product Red) or one of several other products.

Rival Flipkart will be offering cashback deals and discounts on products from partners Samsung, Oppo, Vivo and Lenovo. While several product categories will go on sale on May 14, deals on smartphones and other electronics will begin on May 15. Flipkart will also be giving away free vouchers and an international holiday.

OnePlus 5 price and specifications purportedly leaked online
As anticipation mounts for the imminent launch of the next OnePlus "flagship killer", an online retailer has put up a full listing with OnePlus 5 specs, a photo and a price. If accurate, the successor to the OnePlus 3T will cost $449 (approximately Rs. 28,880) and go on sale in June 2017. The listing on Oppomart.com appears to confirm that the phone will indeed be called OnePlus 5 and will have a 5.5-inch QHD (1440x2560) screen, plus a Qualcomm Snapdragon 835 SoC, 6GB of RAM, and dual 12-megapixel rear cameras. The listing also reveals 64GB and 128GB storage options, Quick Charge 2.0 support, Oxygen OS based on Android 7.0, dual Nano-SIM slots, and a 3580mAh battery. Only a black version is described. There's no telling how accurate all of this is, but it lines up with previous leaks.

Nokia 3310 (2017) "now shipping"; Nokia 6, Nokia 5 and Nokia 3 launching soon
HMD Global, the company that now manufactures and sells Nokia branded phones, has announced that the nostalgia-inducing Nokia 3310 (2017) has started shipping from its factories. However, there's no clarity on where exactly it will first go on sale. HMD has not announced which countries or even regions will get the phone first, though demand is sure to be astronomical. It is still expected to go on sale within the next few months.

Meanwhile, the company has also confirmed that the more conventional Nokia 6, Nokia 5 and Nokia 3 models will go on sale globally in "May-June". The company previously revealed that it was targeting 120 countries for a launch in 2Q 2017. Specific launch plans for India could be announced as soon as Monday.

Xiaomi Redmi 4 India launch teased
Xiaomi is gearing up to launch its next budget model, most likely the Redmi 4, in India this month. The company has tweeted that a new Redmi model will arrive soon, but no details have been confirmed, except for a comment from Xiaomi India's VP Manu Jain about a big announcement this month. An image in the tweet is tagged with the words "Power in your hand". The Redmi 4, and a possible Redmi 4 Prime variant, would replace the Redmi 3S and 3S Prime respectively. The Redmi 4 in China has a 5-inch 720x1280-pixel screen, Snapdragon 430 SoC, 2GB of RAM and 16GB of storage, while the Redmi 4 Prime has a 5-inch 1080x1920-pixel screen, a Snapdragon 625 SoC, 3GB of RAM and 32GB of storage.

ISRO 'SAARC' satelite launched successfully
ISRO today conducted a successful satellite launch using a GSLV-F09 rocket from its Sriharikota spaceport. The 2,230kg South Asia Satellite, also known as the SAARC satellite, is intended to boost connectivity and communication between south Asian countries. Valued at Rs. 235 crore, the satellite can be used for mapping natural resources, telemedicine, remote learning, and ordinary communications. It is being touted as a "gift" to all SAARC countries, although Pakistan has opted out of using it. It is expected to have a lifespan of at least 12 years.

The iPhone 7 is cheaper in India than in many other countries
An annual report published by Deutsche Bank indicates that it is cheaper to buy an iPhone 7 in India than in a large number of other countries. Relative to its price in the USA, the iPhone 7 costs only 11 percent more in India, putting the country in 11th place in terms of price disparities. In contrast, the iPhone 7 costs 147 percent of its US price in Turkey, and 137 percent in Brazil. The only country at parity with the USA is Japan, while Hong Kong comes in at 101 percent and Malaysia at 104 percent. The Mapping the World's Prices report uses official prices and might not account for taxes or retail fluctuations in all countries.

TRAI to launch call quality rating app
India's telecom regulatory authority has announced that it will launch an app which will allow smartphone users to rate the quality of service they receive, which will help it improve quality control checks and take action against companies whose services are found to be deficient. TRAI will also be rolling out measures to strengthen the 'Do Not Disturb' registry to improve the blocking of unwanted spam calls and messages. The announcements were made at an event celebrating TRAI's 20th anniversary.

Separately, Telecom Minister Manoj Sinha announced that he is keeping a watchful eye on methods used to manipulate the tracking of dropped calls, which will also help customers hold their service providers accountable.

WhatsApp and email can be used to serve court summons
The Delhi High Court has decided that messengers, social networks and email can be used to serve summonses when citizens need to appear in court. The order comes after a defendant in a case before the court could not be reached at his physical address. Summons was then served via WhatsApp, email and text message. The case in question involves the anonymous circulation of allegedly "unwarranted, defamatory and baseless allegations" against an official of Tata Sons Ltd.

Facebook reactions can now be used in comments
Facebook's six reaction emojis, introduced to diversify the range of emotions one can express to a post other than just "liking" it, can now be used in comments as well. The "love", "wow", "haha", "angry", "sad" and "like" reactions will now appear as options when responding to comments as well as posts across Facebook's Android, iOS, and Web versions.