With the Amazon Pay Later service, Amazon is aiming to enhance the purchasing power of Indian customers. 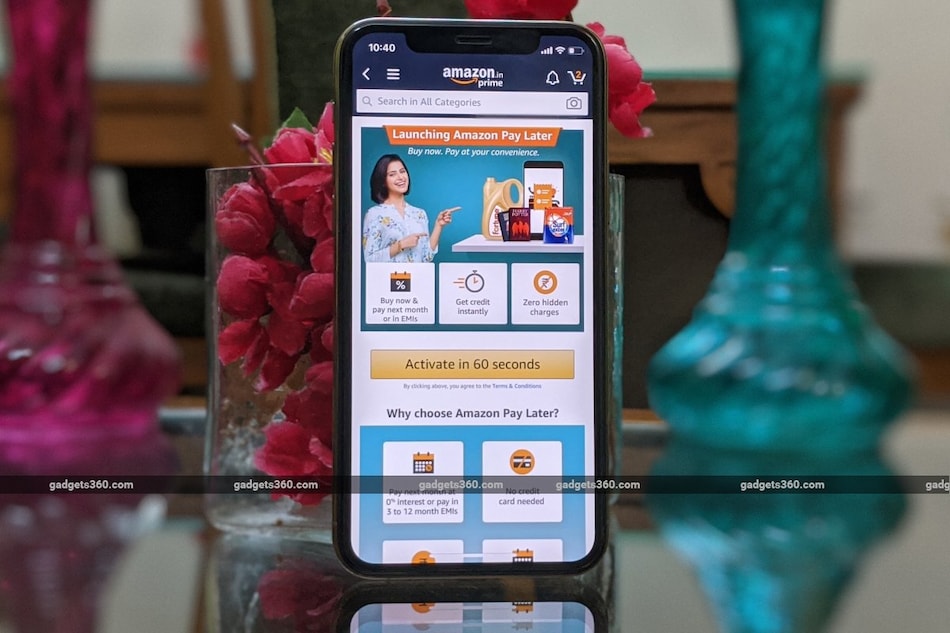 Amazon has launched a credit service called Amazon Pay Later for its customers in India. The service is a rebrand of Amazon Pay EMI that the US e-commerce giant launched in the country back in September 2018. However, there are additional benefits such as the ability to get instant credit on (almost) any of the products listed on the online marketplace and access credit even for groceries and utility bills. The Amazon Pay Later service also offers the option to repay in a subsequent month at no additional fees or convert large ticket transactions into monthly instalments for up to 12 months.

With the Amazon Pay Later service, Amazon is aiming to enhance the purchasing power of Indian customers and let them easily extend their budgets while shopping online. It allows customers to purchase any of the listed products on the marketplace with the option to pay the amount in a subsequent month. Also, customers can alternatively opt for easy EMI options for up to 12 months. There is an interest rate of between one and a half to two percent a month, though Amazon also has various products with no-cost EMI options that effectively bring interest-free benefits.

Aside from providing credit on the products available on the marketplace, Amazon Pay Later can be used for paying monthly bills of utilities such as electricity or water or even for mobile bills and recharges. Customers can also use the service to purchase their groceries or other essential items on credit during the lockdown. As mentioned, Amazon Pay Later can be used for almost any product on Amazon, with some exceptions - these are cash equivalent products, such as jewellery, Amazon Pay Gift Card, Amazon Pay balance top-up, products from Amazon Global Store or out of country or overseas merchants, or bullion (gold and silver).

“In the older product [that was] Amazon Pay EMI, you could only use it for instalments for buying big ticket purchases,” said Vikas Bansal, Director — Financing and Lending, Amazon Pay, in an interview with Gadgets 360. “But what we've done now is we've upgraded that to Amazon Pay Later, where customers can either use it for their small ticket purchases, for payment experience or convenience, or continue to use this for the large ticket purchases and pay in instalments.”

Notably, Amazon had brought its Amazon Pay EMI service in 2018 for customers checking out products worth more than Rs. 8,000. It was, however, later expanded to a minimum transaction value of Rs. 3,000.

Customer feedback brought its creation
Amazon Pay EMI was launched as Amazon's answer to Flipkart Finance EMI and other EMI solutions available in the market at that time. However, the Seattle-based company has taken a step further with Amazon Pay Later. This takes on the competition that majorly has Flipkart Pay Later with the ability to receive an instant credit of up to Rs. 5,000 at zero additional cost for up to 40 days as well as LazyPay that allows repayments across over 250 websites and apps with settlement of payments once in 15 days and a credit limit of up to Rs. 1,00,000.

Bansal, however, emphasised that the service offered by Amazon is nowhere like its competitors. He also noted that it was the customer feedback that the company received through the initial days of Amazon Pay EMI that has brought the creation of Amazon Pay Later.

Credit can be given for orders as low as Re. 1
Purchases through Amazon Pay Later can be as small as Re. 1 or go up to Rs. 60,000, which is the initial credit limit of the service. However, Mayank Jain, Leader Consumer Credit Products, Amazon Pay India, told Gadgets 360 that the Rs. 60,000 limit is based on the regulations provided by the Reserve Bank of India (RBI), and it's not exactly the limit imposed by the company.

Amazon has continued its partnership with digital lender Capital Float, who was the lending partner for Amazon Pay EMI earlier. Additionally, the company has brought the Karur Vysya Bank (KVB) on board to fulfil customers' credit requirements.

Jain revealed to Gadgets 360 that Amazon has plans to take the service beyond its native platform and enable its credit facility for its merchant partners. “Today, it is allowed on shopping as well as on bill payments,” he said. “But even if you want to order from Swiggy or from BookMyShow or from ClearTrip, you'll be able to use this line online and offline merchants wherever Amazon Pay is accepted.”

To begin with Amazon Pay Later, Amazon is initially running a pilot with a small set of customers. The service, however, has now been extended to lakhs eligible customers.

On the eligibility criteria, Bansal told Gadgets 360 that while Amazon initially uses the engagements with Amazon Pay, merchants, and marketplace, the final decision is with the lender, who ultimately decides whether the credit can be provided or not.

“The lender really makes the final assessment and the call on their model as well as their ability to pay back… But there are several variables that go into it to make sure that it is healthy, as well as at the same time not overly generous to have a loss rate. So it's something a calibration that our lenders do,” he said.

Jain added to what Bansal told Gadgets 360 by saying that Amazon doesn't provide any specific customer data to the lenders.

Process to avail the service

To register for Amazon Pay Later, you need to visit the dedicated registration page on the Amazon app available for your smartphone. You will then be required to go through a know your customer (KYC) process in order to enable the service for their Amazon Pay accounts. As per the FAQ page, the company supports two modes of KYC completion — one is where the existing KYC on Amazon can be used, while the other one is where an OTP based eKYC is conducted to bring the customer on board. A PAN number is also mandatory for KYC checks and to avail the service.

Once the KYC process is completed for the service, you will be able to view your registration status from the Amazon Pay Dashboard available within the Amazon mobile app and the Amazon.in site. The Dashboard will provide all your future transaction records.