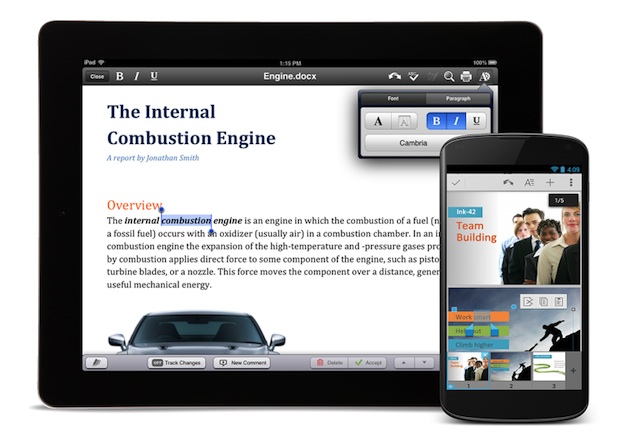 Google has made Quickoffice mobile app free for both Android and iOS users, following Apple's announcement to offer its iWork apps, Pages, Numbers and Keynote free to people who buy new iOS devices.

It's interesting to note that after acquiring Quickoffice in June 2012, Google had made the iPad version of the app free for its Google Apps for Business customers in December. Earlier this year, it extended the same perk to Android users and made the iPad app compatible with the iPhone.

However, starting today all iOS and Android users will be able to download and use Quickoffice, free of charge. Google has also announced that if users sign in to their Google Account from the new Quickoffice app for Android or iOS by September 26, 2013, they'll get an extra 10GB of Google Drive storage for two years, which will be added to their account in the next few weeks.

It's interesting to see mobile Office suites taking each other on. With the announcement of the new iPhones, Apple had made its iWork suite which also lets users create, edit and view presentations, documents and spreadsheets, free for new users. The apps are offered when users activate their new iPhones or iPads running iOS 7. The iWork apps are also integrated with iCloud, Apple's own cloud storage and sync solution.

Ironically, Microsoft's Office apps, which were launched for both Android and iPhone are offered as a free download but an Office 365 subscription is required to use them. The apps also offer the ability to sync documents to Microsoft's Skydrive cloud service. It's worth pointing out that the apps don't work on the Apple iPad or Android tablets in the interest of Windows tablets which showcase Office as one of their key USPs.
Comments