Google Meet will remove you from a meeting if you don't respond to a prompt in two minutes. 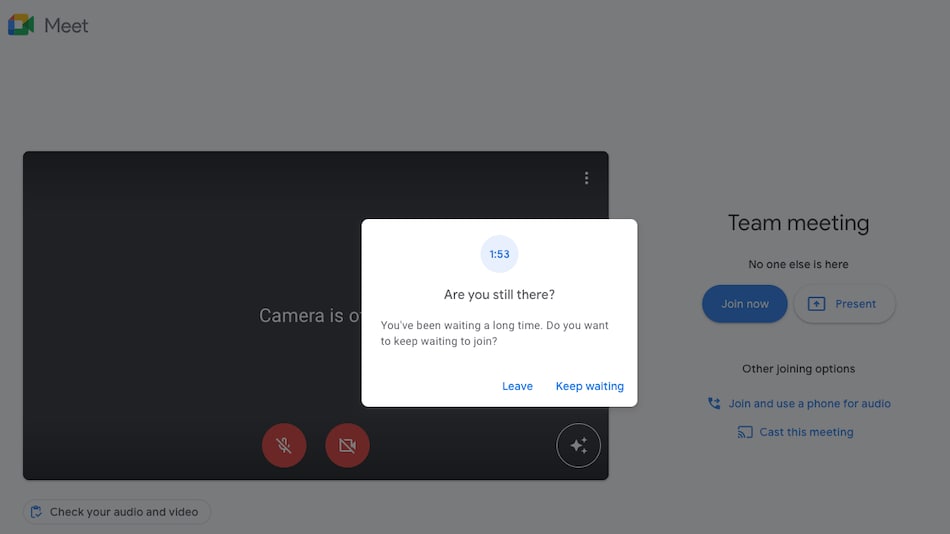 Google Meet is adding new improvements to make video meetings more productive. The video-calling platform will now allow you to exit from meetings when you are the only user left. With this update, when you're the only participant in a meeting for five minutes, you'll receive a prompt asking whether you want to stay or leave the meeting. If you don't respond after two minutes, you will automatically leave the meeting. Further, in order to make switching between menus easier, Google is centralising host management controls in the Meet. They are now consolidated into a central location under the Host controls menu. The controls were earlier found in multiple locations.

Google on Thursday announced the new updates for Google Meet via a blog post. With the new “Leave empty call reminders” feature, when a user is the only person in a meeting for five minutes, they will receive a prompt asking whether they want to stay or leave the meeting. If they don't respond after two minutes, they will be automatically pulled out of the meeting. Google says this functionality will help to avoid situations where your audio or video is unintentionally shared. Google Meet for desktop and iOS devices can enjoy this feature initially. It is said to reach Android devices soon.

The functionality will be turned on by default for all users. They can manually turn it off on the Web by heading to Settings > General > Switch off Leave empty calls. On iOS, users can select the account they want to switch off the settings on the Settings menu and tap on the Leave Empty Calls option.

Additionally, host management controls are getting centralised on the platform. With this, the host and co-host controls will be arranged in one place under the Host controls menu in Google Meet. Google says the change will make it easier to manage meeting settings by eliminating the need to switch between menus. This update will be available only on Google Meet for desktops.

Google confirmed that it started to make the Leave empty call reminders available to all Google Workspace customers and G Suite Basic, Business customers, and users with personal Google accounts. Host management menu update is available for all users.

The improvements will start rolling out on April 11 for users on the Rapid Release domains. It will be made available to all users in the coming weeks. It may take up to 15 days for all users to see these changes.