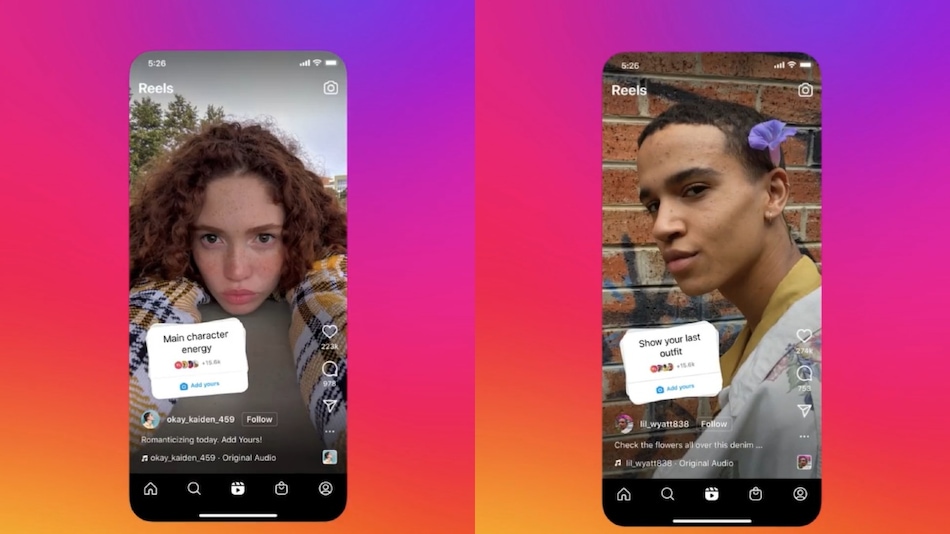 Instagram Reels can now be cross posted to Facebook, Meta has announced while also releasing new tools for content creators. The new features include the ability to add an “Add Yours” sticker to Reels, creator studio insights, ‘Stars' on Facebook Reels, and auto creation of reels on the video and photo sharing platform. The new features and updates appear to be more on the Facebook side. As per Adam Mosseri, Head of Instagram, these tools will help creators increase the number of people their Reels reach and monetise content.

The second feature is the ability to add an “Add Yours” sticker on Reels. This sticker is already popular on Stories, prompting users to share content as per the text written in the sticker. With the new ability, people will now be able to share videos in context with the text written on these stickers. Furthemore, the sticker will have a link to your profile giving you a “shoutout” for starting a trend on the platform.

Users who post Reels regularly on Facebook will stand to gain from the third feature. Content creators will gain improved insights including reach, average watch time, total view time, among others to help them understand how their Reels are performing on Facebook. In a related feature, Meta also announced that Facebook Stars is now available for all eligible creators. Viewers can send these stars to content creators on their Facebook Reels and in return Facebook will pay them $0.01 (about Rs. 0.80) for every star they receive. Creators can check their total Star count in Creator Studio under Stars stats.

The fifth new feature is that Facebook has now got more Reels remix options. The feature will let you create your own Reel by recording alongside an existing one. Users can remix public photos by choosing from different layouts including, a green screen, horizontal, or vertical split-screen to create reels.

Lastly, Facebook can now automatically create Reels using the Stories the users have already shared. The feature could help content creators in multiple situations. For example, if a user has shared a lot of Stories from their recent trip to Europe, Facebook will compile a few of those Stories into one Reel for to share without minimal effort, according to Meta.