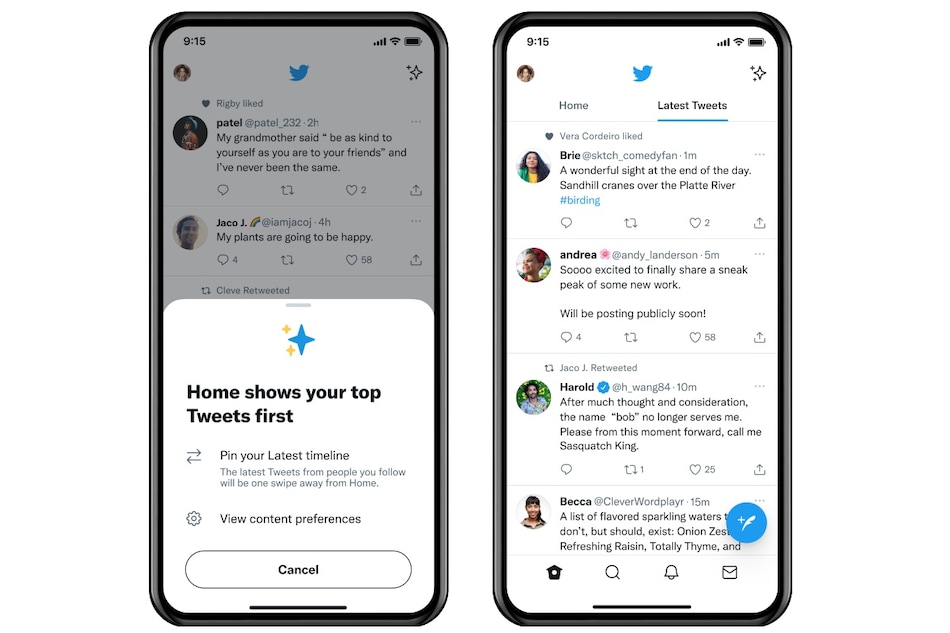 Twitter has started rolling out an update to essentially make it harder to switch to the reverse-chronological feed and push users more prominently towards an algorithmically-served timeline. The change, which is initially live for iOS users and will soon be available to Android as well as Web versions of the microblogging network, brings distinct 'Home' and 'Latest' timelines. While the Home timeline will stack tweets basis on an algorithm, the Latest feed has tweets on your timeline arranged in reverse-chronological order.

As a result of the update, users on iOS have started seeing distinct Home and Latest Tweets tabs on their Twitter app once they tap the three-star icon from the top-right corner. This allows users to switch from the algorithmically-served Twitter feed to the reverse-chronological timeline with a swipe gesture.

However, one underlying change that the latest update brings is the default availability of the Home tab to always show the algorithmic feed once you open the Twitter app. This can be annoying for a number of users who don't want an algorithmically-served timeline.

Up until now, users were given the option to either view the algorithmic timeline or the reverse-chronological feed by tapping the three-star icon. The preference would be in place by default and would not go away even if you access the app after some time. The update is, thus, meant to force people to use the algorithmic timeline over the standard reverse-ordered feed.

Twitter initially started rolling out its algorithmically-driven timeline in 2016. It deployed a deep learning system into place to serve tweets on the basis of their relevance over their chronology. The move, though, did face some criticism initially.

Twitter CEO Jack Dorsey also responded to the criticism by emphasising on the real-time experience that the platform offers to its users. “Twitter is real-time. Twitter is about who & what you follow. And Twitter is here to stay! By becoming more Twitter-y,” he had said at the time.

Twitter making algorithmic the default for all its users is a step further that giving users the option to choose between traditional reverse-chronological feed or algorithmically-served timeline, which it introduced in December 2018.

Unlike Twitter, Instagram is bringing a chronological feed option this year. Instagram's update is, though, a result of the intense scrutiny and pressure built by the US Congress.

The latest update by Twitter was started as initial testing with select users on iOS in October.