WhatsApp's 'View Once' Feature Lets You Send Disappearing Photos, Videos That Can Be Viewed a Single Time

The ‘View Once’ feature initially started rolling out to WhatsApp for iPhone version 2.21.150. 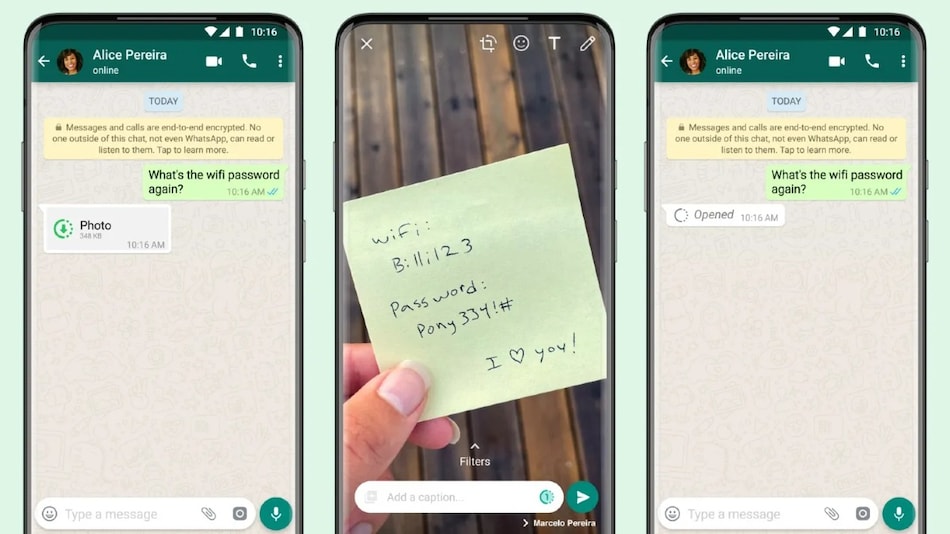 WhatsApp has been testing the ‘View Once’ feature for some time

WhatsApp now lets you send photos and videos that can only be viewed once by recipients. The new change initially started rolling out to the iPhone users through a new WhatsApp version on Tuesday. However, shortly thereafter, the instant messaging app announced its rollout for all users, including the ones on Android. WhatsApp has been testing the ‘View Once' feature for some time to essentially enable photos and videos to disappear from the chat after they are viewed by the recipient. However, it doesn't restrict people from keeping a record of the media content by simply taking their screenshots.

The anticipated ‘View Once' feature initially started rolling out to WhatsApp for iPhone version 2.21.150 in India. However, Android users have now also started seeing the new experience.

Once you get the ‘View Once' feature, you will be able to enable the disappearing of the photo or video before sending it to your contacts by tapping the new ‘1' icon that appears next to the caption bar.

Photos and videos that are being shared using the 'View Once' feature will no longer be visible in the chat where they were sent once the recipient exits the media viewer. The media content will also not be saved to the recipient's Photos or Gallery, and they can't forward them through the app. Moreover, the photo or video sent using the feature will also expire from the chat if it's not opened within 14 days.

Having said that, recipients can still take a screenshot of the 'View Once' photos or capture these videos by using the default screen recording feature. WhatsApp, thus, recommends users to only send photos and videos using the new feature to trusted individuals.

WhatsApp has been testing the feature since at least September 2020 to let users make their photos and videos disappear from the app once it is viewed by the recipients. It also entered the beta testing phase for both Android and iOS devices in late June. The Facebook-owned app also brought it to WhatsApp Web for some users last month.

One of the use cases of the ‘View Once' feature that WhatsApp has highlighted in a blog post is when users are sharing something sensitive like a Wi-Fi password that they don't want to be stored on the recipient's phone. You can also use the feature if you are sharing photos of something you're checking at a store to get a quick reaction from the recipient.

WhatsApp is currently rolling out the feature to everyone starting this week. Make sure that you have the latest WhatsApp version on your phone to receive the new experience.

Alongside the ‘View Once' feature, the updated WhatsApp for iPhone has also brought a new style of in-app message notifications that removes the clutter and brings more focus to the message content.

You can download the latest WhatsApp release on your iPhone by going through the App Store. It is compatible with all iPhone models running iOS 10.0 and later. Android users can also get the updated WhatsApp version from Google Play store.