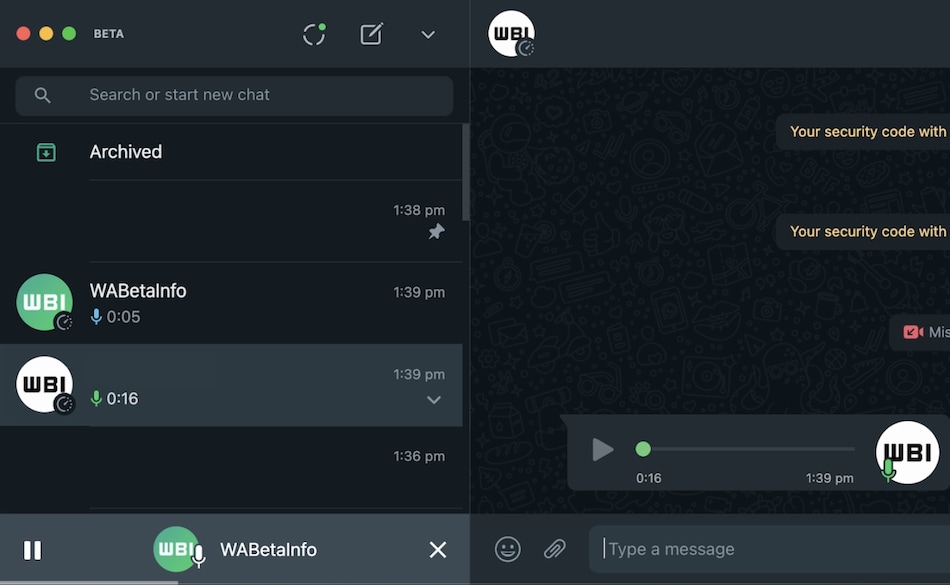 WhatsApp has been reportedly spotted testing a functionality for its desktop app that lets it continue playing voice notes, even when users switch to another chat. The feature was first spotted for WhatsApp beta users on iOS last month. The instant messaging service's disappearing messages feature has been spotted with a new functionality that mentions when disappearing messages are turned on, users will not be able to save media. Furthermore, WhatsApp has reportedly redesigned its add a caption menu when sharing media.

As per a report by WhatsApp features tracker WABetaInfo, Meta's instant messaging service is testing a feature that lets users keep listening to a voice note, even when they have switched over to another chat. The app also shows a media bar at the bottom of the chat list through which users can control playback of the voice note. Alongside, the media bar also shows a progress bar indicating the duration of the voice note left.

The new feature is available with WhatsApp beta for desktop 2.2204.5 but is said to be available for some users on version 2.2204.1 of the app. The feature was spotted last month for WhatsApp for iOS beta 22.1.72 as the global voice message player for some users.

WABetaInfo, in another report, mentions that in WhatsApp for Android beta 2.22.4.12 it discovered hidden references for a feature that prevents media being displayed in the device gallery if the user has turned on disappearing messages. As per the report, when this feature is widely released, users will not be able to turn on Media Visibility due to privacy reasons. However, this does not signify that WhatsApp will notify or prevent users from taking screenshots in chats that have disappearing messages turned on.

Another report by WABetaInfo suggests that WhatsApp is testing a redesigned caption menu while sending media. Furthermore, the report also mentions that users will now be able to add recipients while sending a media along with uploading it as a status. This functionality was initially spotted last year. The new redesigned caption menu is currently under development and may take a while before it is rolled out.