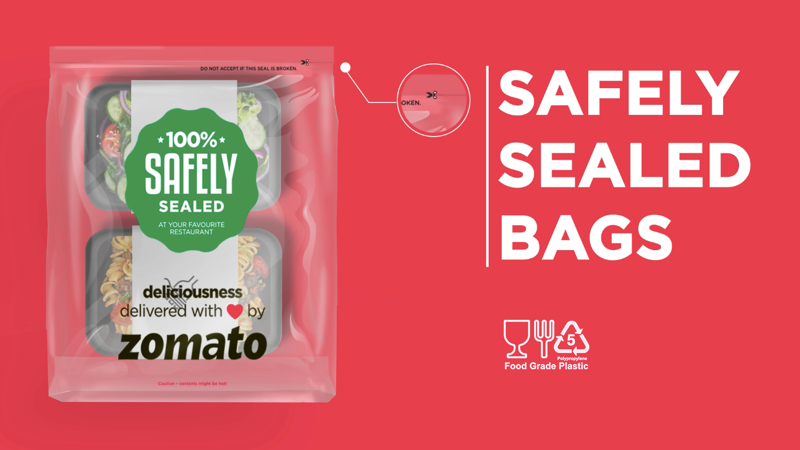 In December last year, a viral video of a Zomato delivery executive sparked outrage from the public. The video showed a person dressed in Zomato-branded clothing, consuming food meant to be delivered to someone else. It also raised food safety concerns amongst customers who rely on food delivery apps. Zomato was quick to confirm the incident and promised to solve the issue. The company has now introduced "tamper-proof packaging" to prevent such cases from happening again.

Zomato claims its new packaging, titled 'Zomato Safety Sealed', is 100 percent tamper-proof. The packaging consists of a transparent polymer-based outer layer that is designed to fit existing food boxes used by restaurants. It will be available in two different variations to support food boxes of different sizes.

The restaurant will have to seal the package at their end before it is handed over to the Zomato delivery executive. The packet can then be opened by chopping off the top strip. Zomato is hoping that adding an extra layer of safety will ensure incidents like last year's aren't repeated.

The company is initially rolling out its new tamper-proof packaging across 10 cities in India. These include Delhi NCR, Mumbai, Bengaluru, Hyderabad, Kolkata, Pune, Jaipur, Chandigarh, Nagpur, and Vadodara. Zomato says it will extend it across all the 180 cities where its online ordering and delivery services are available.

In addition, Zomato will also display a badge on its app to indicate if a particular restaurant uses the company's new tamper-proof packaging. Zomato's app will show a '100% Safely Sealed' badge for supported food joints.