AirPods were originally released in 2016 with a second generation in 2019. 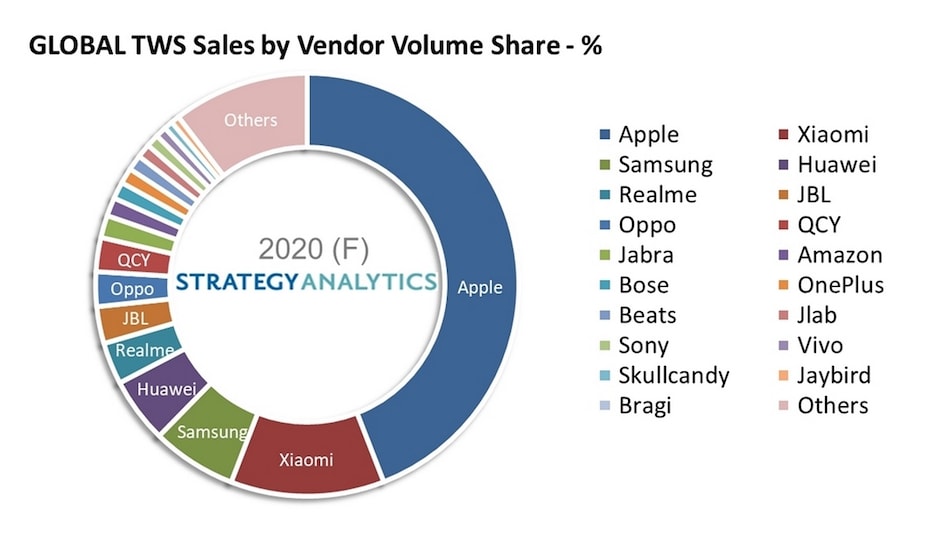 AirPods Pro were launched in 2019

Apple AirPods had a commanding lead in the true wireless stereo (TWS) earphones segment in 2020, a new report shows. Overall TWS sales saw a significant growth of nearly 90 percent last year, and a majority of these TWS earbuds sold were from Apple. While the report does not specify the models, these numbers presumably include both the Apple AirPods and the Apple AirPods Pro sales. Apple has so far launched two generations of AirPods and one generation of AirPods Pro. Xiaomi followed Apple to come in second, but with significantly lower sales.

The report by Strategy Analytics says that TWS market grew by nearly 90 percent in 2020 and that the global Bluetooth headset sales were over 300 million units in the last year. The TWS market was dominated by Apple's AirPods accounting for almost 50 percent of the total TWS sales. These presumably include the Apple AirPods, both first and second generation, as well as Apple AirPods Pro that were launched in 2019.

The graph shows that Xiaomi was second in line but with a significantly lower sales share in 2020. Samsung, Huawei, Realme, JBL, and Oppo followed next in descending order of sales.

Ken Hyers, Director at Strategy Analytics, pointed out that Apple could see its commanding lead shrink because of the competition from Xiaomi, Samsung, and Huawei in 2021. Brands such as Bose, Beats, Jabra, OnePlus, and others accounted for very small volumes, according to the report.

“Apple maintained a commanding lead in the TWS segment in 2020, but its commanding share is shrinking as competition intensifies. Strong competition is expected from Xiaomi, Samsung, and Huawei in 2021. The TWS headset market is already hugely overcrowded and despite a strong sales outlook, there will inevitably be consolidation in the years ahead,” Hyers said.