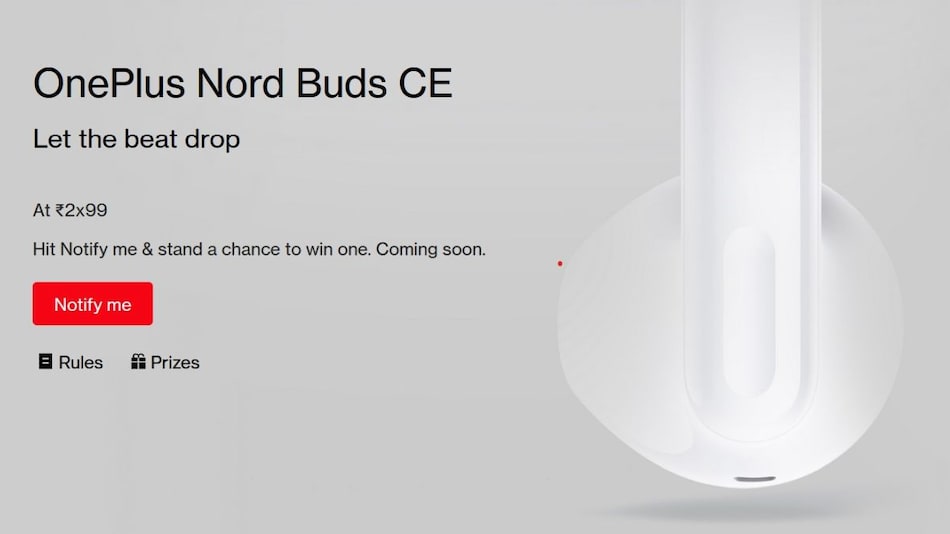 OnePlus Nord Buds CE is confirmed to launch in India on August 1. According to the company, they are going to be entry-level true wireless stereo (TWS) earbuds. Unfortunately, for now OnePlus has only confirmed that the launch date in India, but hasn't shared any other details. Specifications of the upcoming earbuds are not known yet. They were earlier reportedly spotted on the Bluetooth SIG database with the model number E506A. It was also spotted on the Bureau of Indian Standards (BIS) database, as per the report.

The Chinese company, OnePlus, has announced that it will be launching the OnePlus Nord Buds CE in India on August 1. Unfortunately, the company did not reveal any specifications for the earbuds. OnePlus said that the new Nord Buds CE are going to be entry-level TWS earphones. The company claims that the earbuds are aimed at making the OnePlus audio technology accessible to more people in India.

According to an earlier report, the OnePlus Nord Buds CE TWS earbuds have been spotted on the Bluetooth SIG and BIS India database with the model number E506A. The Bluetooth SIG database also reportedly revealed that the earbuds will likely feature Bluetooth version 5.2 for connectivity.

To recall, OnePlus Nord Buds were launched in India in April this year. The earbuds were also entry-level TWS earbuds. At the time of their launch, the Nord Buds were priced in India at Rs. 2,799. They feature Black Slate and White Marble colour options.

OnePlus Nord Buds offer upto 7 hours of playback time on single charge. They feature 12.4mm Titanium driver with frequency response range of 20Hz to 20,000Hz. They get driver sensitivity of 102dB. Nord Buds also feature an IP55-rated body for dust and water resistance. The OnePlus Nord Buds sport Bluetooth version 5.2 connectivity with a maximum range of 10m. The earphones have a latency rate of up to 94 milliseconds that can only be experienced on selected OnePlus phones with the gaming pro mode enabled.