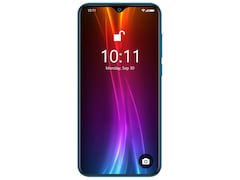 Coolpad launched a pretty interesting budget smartphone called the Cool 5 a couple of months ago. The company's most recent budget offering came in just before Xiaomi launched the Redmi 8 in India, and it offers similar features and specifications at a tempting price. The Coolpad Cool 5 boasts of a decently big battery, a USB Type-C port, and dual rear cameras, all of which should appeal to buyers with tight budgets.

The Coolpad Cool 5 is a budget smartphone, with a plastic body and a glossy coat of paint. The capacitive fingerprint sensor works well, but this phone is a little slow at waking up after you are successfully authenticated. The Coolpad Cool 5 has a 6.22-inch HD+ display. Colours aren't very vivid but viewing angles are decent. We found the display to be adequately bright when using it outdoors.

It uses the MediaTek Helio P22 octa-core SoC and is only sold in one configuration in India — with 4GB of RAM and 64GB of storage. Coolpad uses a custom version of Android 9 Pie, which has elements of stock Android along with some customisations such as a Themes app.

Navigating Android was a relatively smooth affair, and multitasking was generally responsive. Due to the weak SoC though, apps still took a little long to load and heavier games struggled to deliver smooth framerates. Even in PUBG Mobile Lite, gameplay wasn't the smoothest. The 4,000mAh battery offers enough runtime to get you through one day, but not much else.

The Cool 5 has a 13-megapixel primary rear camera with a 2-megapixel depth camera, and a 16-megapixel camera on the front. Even under good light, the main rear camera produced poor results. Details were weak, colours looked completely off, and the dynamic range was poor. Overall, the cameras on the Cool 5 are very disappointing and you wouldn't want to use this phone even for basic social media posts.

Coolpad Cool 5 Review- Should You Buy This Budget Smartphone? 04:39