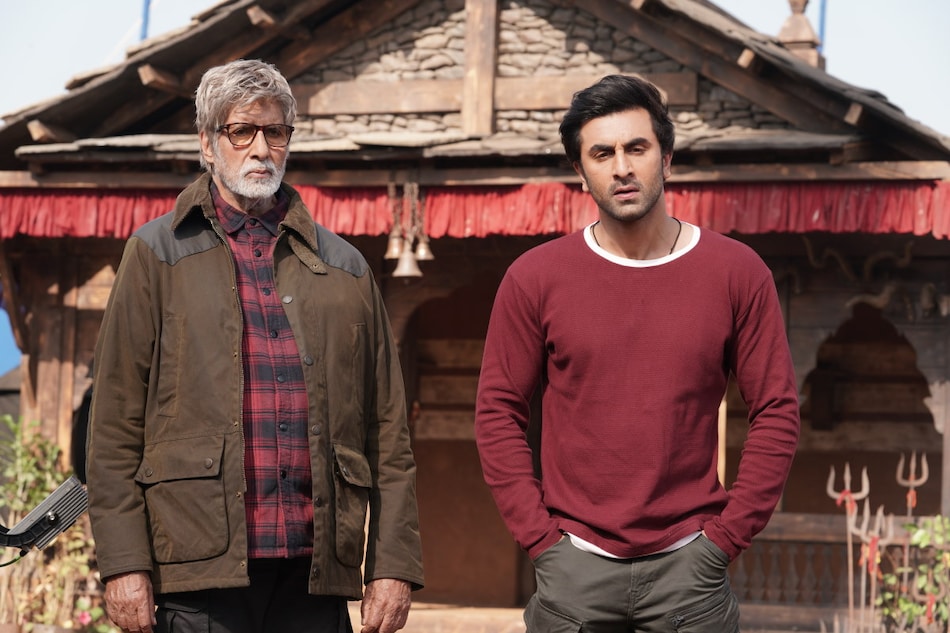 Amitabh Bachchan and Ranbir Kapoor in a still from Brahmāstra: Part One – Shiva

Brahmāstra — out Friday in theatres — is a grand spectacle that's been six years in the making. Wake Up Sid filmmaker Ayan Mukerji has crafted what could be the biggest film in Hindi cinema, weaving a romantic fairytale that blends in supernatural elements. Primarily shot in Bulgaria, Brahmāstra: Part One – Shiva is the first of a planned trilogy, exploring various Hindu myths in a modern-day scenario, kickstarting India's own cinematic universe, ‘The Astraverse,' which will likely dig into other celestial weapons.

Multiple delays, a pandemic, and two COVID-19 lockdowns later, Mukerji's passion project is finally about to be realised. The Karan Johar-produced Brahmāstra packs in a ton of visual effects, for which it worked in tandem with a UK-based FX house, Double Negative. Known for its work on Hollywood blockbusters like Dune and Inception, it collaborated with India's Prime Focus to conceive the film as we “know” it today.

“All our pre-production and the years we spent making it, was all London VFX House DNeg technicians. How do we get the visual effects? How do we translate this story on the big screen? There's a level at which visual effects and film budgets and technology is capped at in India,” Mukerji said in an interview.

Inspired by the likes of The Lord of the Rings — the world of which itself has returned in Amazon's The Rings of Power — Mukerji plans to draw audiences to the silver screen by presenting a big theatrical marvel. The surrounding hype is indicative of this working, given the promotion is purely driven by its A-list Bollywood cast and the cosmic space-inspired CGI that has never graced Indian cinema before. Plot details are still under wraps, though Mukerji notes he tried reimaging ancient Hindu culture through the lens of a modern-day Indian.

“The film is kind of a meeting place of modern India with a feeling of ancient Indian powers about it, which, in many ways, is what our country is. Like, we live in the modern world but Indians are a bit spiritual, close to faith, close to a feeling that something divine connects us or hangs around us,” Mukerji said in an interview.

With that, here's everything you need to know about Brahmāstra: Part One – Shiva.

Parent company Walt Disney Studios has ensured a global release for Brahmāstra, reportedly premiering on almost 3,000 screens internationally, with a US and Canada release set for September 9.

Tickets for Brahmāstra went live on September 5, across all major Indian theatres — PVR, INOX, and Cinépolis — and the BookMyShow and Paytm online portals. Advance booking is only enabled for the standard 2D, 3D, and IMAX 3D formats, while 4DX version tickets can be acquired on release day.

At the time of writing, Brahmāstra: Part One – Shiva has reportedly sold well over 1 lakh tickets for the opening day, clocking in the biggest advanced booking rates since the start of the COVID-19 pandemic. INOX alone has sold 1.25 lakh tickets for the first weekend, Gadgets 360 can confirm.

The first Brahmāstra movie opens as early as 8am on Friday in some cities, with more shows scheduled throughout the day, with final screenings pencilled in for 11:30pm.

More of Shiva's fire is here! Only four more days before you can see all of it. 🔥❤️‍🔥#4DaysToBrahmastra

Production budget for the first Brahmāstra movie was revealed to be Rs. 410 crore, making it the costliest Bollywood film to date — falling just short behind Rajamouli's Telugu-language RRR, and the Rajnikanth-led Tamil-language 2.0. Of course, that Rs. 410 crore budget excludes print and publicity expenses, which is standard for the industry.

Following the box office disaster that was Shamshera, Ranbir Kapoor expects a return to form with Brahmāstra. Here, he plays Shiva, a carefree, young DJ who possesses the power of Agnyāstra aka the fire element. Think of him like the fire bender from Nickelodeon's Avatar, who is not only resistant to flames, but can wield them as devastating weapons. Upon learning that the titular astra is in danger of falling into the wrong hands, he must learn to channel his blazing powers and fight back.

Alia Bhatt (Darlings) plays his love interest, Isha, who at one point, is entrusted with a piece of the Brahmāstra. A teaser for the film revealed that the legendary armament was actually disc-shaped — broken and scattered in different parts of the world, akin to the Dectus Medallion from Elden Ring. This would explain why the movie was shot in multiple locations, as our heroes would have to hunt down the parts. As for her character, there isn't much information to go on, though a quick tease in the Brahmāstra trailer hints at her being in control of the Jal Āstra (water).

Shiva is an up and coming DJ, who forms a romantic relationship with Isha
Photo Credit: Dharma Productions

Bollywood legend Amitabh Bachchan is billed third on this list as Guru Arvind, the leader of the Brahmānsh who wields the Prabhāstra, the sword of light. As a sworn protector of the ancient astras, he learns of Shiva and reaches out for help with harnessing the powers of the Brahmāstra — capable of vanquishing all beings. As you would expect, he assumes the role of a “Guru” to Shiva, enlightening him on the rich history surrounding the weapons and training him for the battle to ensue.

Spearheading the conflict is Mouni Roy (K.G.F: Chapter 1) as Junoon, the Queen of Darkness — whose outfit and elemental aura funnily resemble Scarlett Witch from the Marvel Cinematic Universe. As a revered devotee of Lord Shiva, Junoon has built herself an army that would assist in tracking down the supernatural weapon, albeit details regarding her motivation and the larger scheme of things are hush-hush.

Up next is Nagarjuna Akkineni (83) as Anish, an artist and wielder of the Nandi Astra. Serving directly under Guru Arvind's belt, he teams up with Shiva, unleashing an astral projection of a thousand bulls to neutralise all incoming assaults. The alliance also goes in line with Hindu mythology, where the sacred Nandi acts as a vehicle/ vahana for Lord Shiva. That being said, Nagarjuna's appearance in Brahmāstra is restricted to an “important” cameo. “I was a little sceptical of doing it in the beginning. But when Ayan came on and presented it to me — the whole script was just amazing, it was brilliant. And seeing his vision of the script and passion poured into it [...] instantly, I didn't even hesitate after that,” Nagarjuna said in regards to his casting.

Another intriguing cameo comes from Shah Rukh Khan, who plays an unnamed scientist, armed with the Vanarāstra. Similar to Anish, he can summon the strength of a “divine” monkey (Hanuman), letting him leap onto great heights whilst dispelling an aura of lightning energy.

Meanwhile, wrestler-turned-actor Saurav Gurjar makes his Bollywood debut as a key henchman to Junoon. “I will be seen playing a negative role. It's a modern-day film set in India. But the reason it's called Brahmāstra is because the energies, wisdom and powers in the film come from ancient India,” he said in a prepared statement.

Here's the official synopsis for Brahmāstra Part One: Shiva from Walt Disney Studios:

Set in modern-day India, the narrative is woven around the existence of Astras of power that have been protected by a group called the Brahmānsh since Ancient Vedic times. The most powerful of these Astras, named after the most powerful weapon of the Gods, is the Brahmāstra. A mysterious dark force is trying to wake the Brahmāstra, threatening the universe we know today.

The new film sees hero Shiva (Kapoor) journey into this magical world of Astras where he learns of his mysterious connection to the Brahmānsh and the Brahmāstra. Shiva discovers the truth, both about his own destiny as a divine hero and about the great power that dwells within him — the power of Fire.

Dharma Productions unveiled the trailer for Brahmāstra on June 15, detailing the premise surrounding the outer gods and their elemental forces. A good chunk of the three-minute-long trailer also touched upon Shiva and Isha's budding romance, which was put to a halt as the astras and their protectors made their presence known, sending him on a mission to save the universe.

On September 3, the studio also dropped a pre-release promo, offering a deeper look at all the ancient Indian astras to be featured in the film. The wielder of the Nāg Dhanush can shoot out elemental arrows that take the form of a serpent, while the undisclosed character in possession of the Pawanāstra can bend the power of the wind.

First reviews for Brahmāstra: Part One – Shiva are embargoed till 10am on release day.

Here's the official poster for Brahmāstra: Part One – Shiva from Dharma Productions: