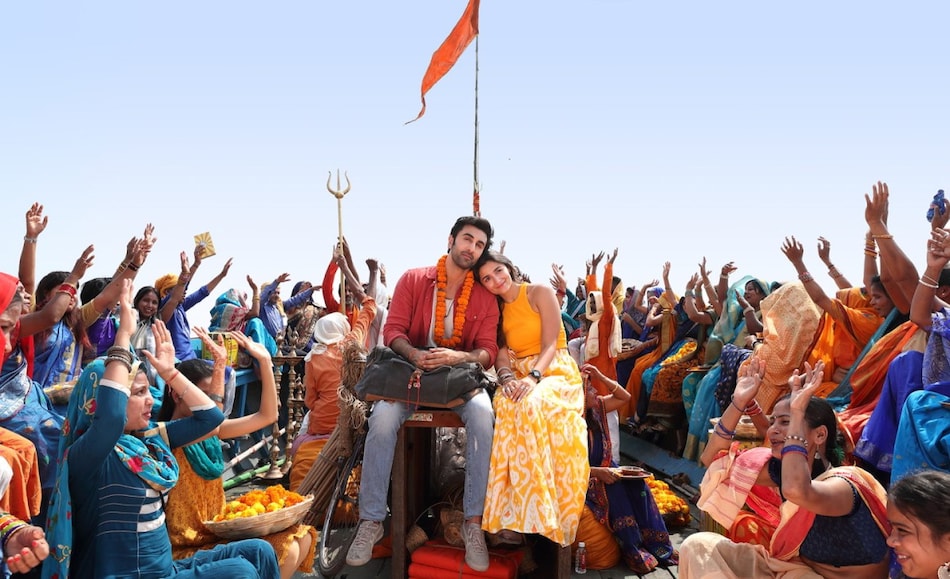 Brahmāstra: Part One – Shiva, led by Ranbir Kapoor and Alia Bhatt, is one of the most anticipated movies gracing Indian cinema this year, filled to the brim with cosmic space-inspired CGI and an ensemble of A-list Bollywood actors. The Karan Johar-produced fantasy film is the first of a planned trilogy, and is slated to release on September 9 in theatres. To close out the month, we have Sacred Games' Saif Ali Khan and Radhika Apte reuniting in Vikram Vedha, a remake of the Tamil film of the same name. With Hrithik Roshan co-starring, Vikram Vedha premieres on September 30 in theatres nationwide.

On the Hollywood side, James Cameron's Academy Award-winning Avatar is getting a 4K HDR re-release, as a hype-building strategy for the long-awaited sequel, The Way of Water. The VFX-driven movie — grossing $2.874 billion (about Rs. 22,753 crore) — will have a two-week-long theatrical run, starting September 23. Over on Netflix, Ana de Armas stars in a fictionalised portrait of the late Marilyn Monroe, under Andrew Dominik's direction. As the only film to receive an NC-17 rating this year — in India, it's simply rated A — Blonde will premiere at the 79th Venice Film Festival, before heading over to Netflix on September 28.

Cobra Kai 5 to The Lord of the Rings: The Rings of Power, the Biggest TV Shows in September

The month of September has even more great titles in store for us, including a “live-action” Pinocchio movie, which takes shape on Disney+ Hotstar. For your convenience, we have curated the biggest September 2022 releases coming to theatres, Netflix, and Disney+ Hotstar, which you can check out below.

When: September 2
Where: Disney+ Hotstar

An aspiring actor-turned-police officer stumbles upon a pattern of serial killings, targeting young school girls. Akshay Kumar leads the cast in this remake of the 2018 Tamil film, Ratsasan, as an aimless police officer who gets to re-enact scenes from an average crime drama, through details he researched for several auditions in the past. While the murders in Cuttputlli push the story forward, much of the focus is on sub-inspector Arjun Sethi's personality, as he struggles to balance professionalism with the thrill of his main character syndrome.

The quaint hill station town of Kasauli, Himachal Pradesh, is put in complete lockdown, as Sethi and his team race against time to nab the killer. With solid leads piling up, the murderer's presence rings close to home, as his family and loved ones come under the killer's radar in a twisted turn of fate. As the name suggests, there also seems to be a recurring theme with puppets, which could be the killer's trademark. Cuttputlli marks the second collaboration between Kumar and director Ranjit Tewari — previously Bellbottom — who directs from an adapted screenplay by Aseem Arora.

Rakul Preet Singh, Chandrachur Singh, and Sargun Mehta top out the cast for Cuttputlli, which was originally titled “Mission Cinderella.”

When: September 8
Where: Disney+ Hotstar

Riding on the success of Jon Favreau's “live-action” Disney remake concept, Pinocchio will not be getting a theatrical release. The Robert Zemeckis-directed adaptation follows the same plot beats as the 1940's 2D-animated film, chronicling the misadventures of the titular wooden puppet boy. Benjamin Evan Ainsworth breathes life into Pinocchio's CGI carcass, from the second he is brought to life by The Blue Fairy's wand flick — played by Cynthia Erivo (Widows). Tom Hanks partners with Zemeckis for the fifth time, portraying Geppetto, the famous Italian toymaker/ creator-father figure of Pinocchio.

Leading the kid astray are con-artist fox Honest John (Keegan-Michael Key) and Gideon the Cat, who coax him to join Stromboli's (Giuseppe Battiston) puppet show and become a star. On the other end, Joseph Gordon-Levitt's Jiminy Cricket tries to keep Pinocchio out of trouble and guide him on the path to becoming a real boy. From nose-stretching lies to dangerous rides in the ocean, the young boy embarks on a wondrous adventure, encountering magical beasts and fantastical spectacles as far as the eye can see. Same as past Disney “live-action” remakes, Pinocchio will incorporate real-life actors and CGI onto the same plane, catering to a new era of audience.

When: September 9
Where: Cinemas

Production on Brahmāstra had been in a state of flux since 2014, with the COVID-19 pandemic delaying the release. Marking the beginning of a new cinematic universe, ‘The Astraverse,' the film has a lot at stake here — produced on an estimated budget of Rs. 300 crore. Written and directed by Ayan Mukherji, Brahmāstra: Part One – Shiva is a present-day fantasy film, drawing inspiration and namesake from various Hindu legends. The plot centres around Shiva (Ranbir Kapoor), a local DJ, who cannot be burnt because of a strange connection with the element of fire. His whole life gets turned upside down when Guru Arvind (Amitabh Bachchan), a strange visitor from afar, reaches out for help with harnessing the power of the titular weapon/ astra — capable of annihilating the entire universe.

As a fledgling, Shiva must learn to channel his blazing powers and prevent the Brahmāstra from falling into the wrong hands. In particular, Junoon, the Queen of Darkness, played by Mouni Roy, who has already dispatched an army to hunt down the supernatural armament. Alia Bhatt (Darlings) joins the cast as Isha, Shiva's love interest, while Nagarjuna plays Anish, a member of the Brahmānsh who wields the Nandi Astra.

Joining the list as one of the most expensive Indian films ever made, Brahmāstra will feature loads of stunning CGI, as the characters set out for battle in this three-part-long sprawling epic. Dimple Kapadia (Tenet), Saurav Gurjar, and Shah Rukh Khan are also part of the lineup — the latter makes a cameo appearance. The film will be out in Hindi, Telugu, Tamil, Malayalam, and Kannada, with SS Rajamouli (RRR) “presenting” the dubbed versions.

When: September 23
Where: Cinemas

An upgraded version of James Cameron's Avatar is coming back to theatres, with the intent to prime audiences for the long-incoming Avatar: The Way of Water. The 2009 sci-fi epic will be presented in “all formats”. The director, who heavily pushed for 3D with Avatar's premiere 13 years ago, continues to vouch for it as a more immersive experience. It is also worth noting that there aren't many 4K HDR screens in India — Gadgets 360 has reached out to PVR, INOX, and Cinépolis for clarity.

In the lush alien world of Pandora live the Na'vi, a populace of tall, blue-tinted beings who seem primitive, but are highly evolved. As means to mine resources for a dystopian planet Earth, a paralysed former marine Jake Sully (Sam Worthington) gets thrust into the poisonous, exotic world through a neural link, allowing for free movement and interaction on Pandora. As a newly-inducted mobile member of the tribe, Jake finds himself torn between two worlds, as he falls in love with a Na'vi woman, Neytiri (Zoe Saldana), and is drawn into a battle for the survival of her people.

In addition to becoming the first film to gross over $2 billion at that time, Avatar also won three Oscars — Best Cinematography, Best Production Design, and Best Visual Effects — and was deemed a technical marvel of its time. The film also starred Stephen Lang, Michelle Rodriguez, and Sigourney Weaver. The sequel, Avatar: The Way of Water, is set more than a decade after the events of the first film, and is expected to improve upon the visuals.

When: September 28
Where: Netflix

This fictionalised chronicle of Marilyn Monroe's inner self began life in early 2010, as filmmaker Andrew Dominik took upon the duties of adapting Joyce Carol Oates' best-selling novel. After a traumatic childhood, Norma Jeane Mortenson rises to stardom in 1950s Hollywood, under the stage name “Marilyn Monroe.” However, her on-screen appearances are in stark contrast to the love issues, exploitation, and drug addiction she endures in her private life. Dominik — who previously worked on two Mindhunter episodes — attempts to break down the psychological barrier and explore the widening split between Monroe's public and private selves in Blonde.

Ana de Armas (Knives Out, The Gray Man) plays Monroe, garbed in the blonde hairdo and the iconic black mole. Upon the trailer's release, the casting choice received some backlash, with many criticising her ethnic background and a hint of Cuban accent that she still maintained in her performance. Monroe's official estate, however, defended the casting, saying de Armas “captures Marilyn's glamour, humanity and vulnerability” — as seen in an early cut of the film.

Adrien Brody (Detachment) joins the lineup as Arthur Miller, a popular playwright and third husband to Monroe. Bobby Cannavale plays Joe DiMaggio, the professional baseball star and second consort, while Xavier Samuel portrays renowned actor Charles Chaplin Jr. The biopic retains the feel of classic Tinseltown by presenting itself in black and white for the most part, with rare segments in colour.

When: September 30
Where: Cinemas

Curiosity about her husband's work begins to consume Alice, forming cracks in their idyllic lifestyle. Houses start shaking, objects in the sky distort, and household items are revealed to be hollow from the inside. All roads of investigation lead to the project founder, Frank (Chris Pine), who brushes off Alice's claims as delusions — leading to rising tension within the well-mannered community. Wilde also co-stars in Don't Worry Darling as Bunny. She is also the writer, adapting a screenplay by past collaborator, Katie Silberman.

Going by the plot beats in the trailer, Don't Worry Darling seems to be heavily inspired by The Stepford Wives (1975), which — spoiler alert — turned all women into robots, forced to oblige by the rules and live forever “harmoniously” in the quaint town. Don't Worry Darling also enlists an ensemble cast, namely Gemma Chan (The Eternals), Kiki Layne (The Old Guard), Nick Kroll, Kate Berlant, and Asif Ali. The film releases in the US on September 23, while Indians get to watch it later in the month.

When: September 30
Where: Cinemas

Filmmaking couple Pushkar–Gayathri mark their Bollywood debut by remaking their own Tamil film, Vikram Vedha. The neo-noir thriller follows a pragmatic policeman, Vikram (Saif Ali Khan), on the hunt to apprehend a local gangster Vedha (Hrithik Roshan). The drama is cut short when Vedha voluntarily surrenders himself and starts narrating three stories, all of which make him question and change his perception of good and evil.

If the name wasn't a dead giveaway, the plot draws parallels to the Indian folktale collection Baital Pachisi — better known as Vikram and Betal — where the stories are merely a distraction to achieving a larger, moral goal. With the Hindi remake of Vikram Vedha, Pushkar–Gayathri wanted to maintain the gritty tone of the original, while aiming for a broader reach within the Hindi-speaking film community.

The movie brings together Radhika Apte as Vikram's wife — Khan and Apte worked together on Netflix's Sacred Games — in addition to undisclosed roles for Rohit Saraf, Yogita Bihani, and Sharib Hashmi (Dhaakad).