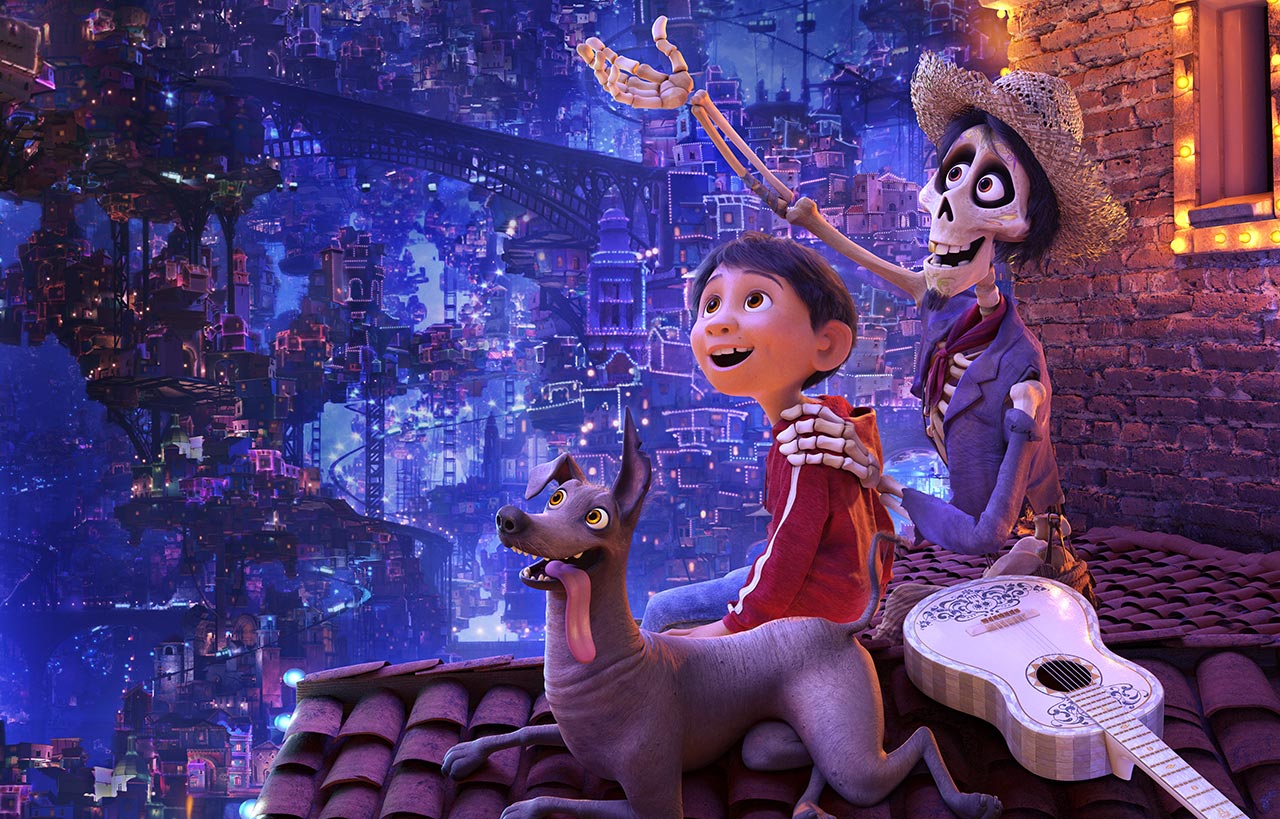 Last Friday director Rian Johnson confirmed that Episode VIII: The Last Jedi would be the longest Star Wars film yet, clocking in at 2 hour and 30 minutes (credits included). The previous record holder was Episode II: Attack of the Clones at 2 hours and 22 minutes. Star Wars: The Last Jedi is out December 15.

Over the weekend, Disney released a teaser trailer for Incredibles 2, the much-awaited follow-up to the now 13-year-old film. The teaser doesn’t really show us any movie footage, but is more of an extended gag involving the superpowered baby, Jack-Jack. The Incredibles 2 is slated to release June 15, 2018.

On Monday, we got a full trailer for Ava DuVernay’s A Wrinkle in Time, the adaptation of Madeleine L'Engle’s famous sci-fi fantasy novel. The trailer shows the rich visuals we can expect from the film, when it arrives March 9, 2018.

Later that day, Variety reported that Lizzy Caplan (Masters of Sex) had been tapped to play the female lead opposite Channing Tatum in Fox’s Gambit. The film had been in limbo for a long while, but it seems to be finally picking up steam. Gambit currently has a release date of February 14, 2019.

Justice League released last week, and DC Films head Geoff Johns revealed this week that Batman will appear in Flashpoint, the solo adventure for Ezra Miller’s Barry Allen. That’s in addition to appearances from Wonder Woman and Cyborg, so this is pretty much a Justice League 1.5 film at this point. Flashpoint will be out in 2020 if all goes well.

Another big personality was added to the list of Hollywood men who have abused their power this week: Pixar exec John Lasseter. He announced a sudden leave of absence on Tuesday, soon after which we got reports of sexual misconduct allegations from THR.

On Wednesday, a Variety report said that Jude Law (Sherlock Holmes) had been cast as the male lead opposite Brie Larson (Room) in Captain Marvel. He will play Dr. Walter Lawson/ Mar-Vell, the original Captain Marvel, who acts as the mentor to Larson’s character. Captain Marvel will release on March 6, 2019.

Runaways premiered earlier this week on Hulu with the first three episodes, with more coming every week. In our review, we noted the show gives kids and parents equal time unlike the comics, though it faces an uphill task in introducing its ensemble cast of sixteen. If you haven’t read the comics, here’s a fun fact: there’s a dinosaur in the show.

The show’s cast also includes Michelle Dockery (Downton Abbey) as a widow who runs the town of La Belle, Merritt Wever, and Scoot McNairy. Produced by Soderbergh and written-directed by Frank, Godless arrived on Netflix earlier this week as a seven-part limited series. The show has seen great action sequences, including a final impressive one.

We say updated because there were multiple aspects that need restructuring to fit the idea of a 21st-century woman on her own terms, including the lesbian Opal Gilstrap (Ilfenesh Hadera) and her other female friendships. Lee has directed all 10 episodes, which means She’s Gotta Have It is full of his aesthetic: close-ups, fourth-wall-breaks, and long takes.

Critics seem to agree it’s a show worth watching, with Indiewire’s Ben Travers concluding: “Lee has successfully expanded and altered the original film for a series format. Episodes have arcs. The season does as well. And while the men may steal focus from time to time, the update makes sure no one will forget Nola Darling anytime soon.”

How to access: Netflix
Time commitment: 5 hours and 46 minutes

Movies:
Coco
Pixar’s newest family adventure is about a Mexican boy called Miguel (Anthony Gonzalez) who dreams of becoming a famous musician like his idol, Ernesto de la Cruz (Benjamin Bratt). Unfortunately, his family continues to stick to a baffling generations-old ban on music, brought about by the actions of Miguel’s great-great-grandfather.

Miguel wants to prove his talent, but his attempts at securing a guitar for a local music competition on Día de los Muertos – the Day of the Dead, a popular Mexican festival – prove futile, and he ends up in the stunning, colourful land of the Dead. There he meets his long-dead relatives and a trickster named Hector (Gael García Bernal) with whom he tries to figure out his past.

Like previous Pixar entries, Coco is full of visual splendour though it doesn’t quite hit the same heights in terms of unexpected wisdom, à la Toy Story. It’s still a highly enjoyable film, a good-natured celebration of family, and one that will make you shed tears.

And as a bonus, before Coco begins you’ll get to see a 21-minute short called Olaf’s Frozen Adventure, which is set in the world of the extremely popular 2013 film.

How to access: Out in cinema halls
Time commitment: 1 hour and 49 minutes

Other mentions:
Starring Julia Roberts, Owen Wilson, and Jacob Tremblay, Wonder is the inspiring story of a kid with facial differences, based on the New York Times bestseller book. It’s out now in a few big cities, and next week on December 1 in other places around India.

Frank Capra’s 1946 hit It’s a Wonderful Life, considered one of the best films ever and traditional viewing during Christmas, is now also on Amazon Prime Video in addition to Netflix.

Guy Ritchie’s first feature film – Lock, Stock and Two Smoking Barrels – has come to the world of streaming, thanks to Amazon.

Newton, India’s official entry to this year’s Oscars, is a black comedy and political satire starring Rajkummar Rao, Pankaj Tripathi, and Raghubir Yadav. You can now easily watch it on Amazon Prime Video.

Robert Pattinson-starring Good Time, a drama about a New York City petty criminal who spends an increasingly dangerous night attempting to free his younger brother from jail, and Beach Rats, a coming-of-age story of a Brooklyn teenager’s efforts to define his sexual identity, are now available on Blu-ray.

Video games:
Animal Crossing: Pocket Camp
After Mario and Fire Emblem, Nintendo has brought the Animal Crossing franchise to smartphones with Pocket Camp, where you’re the manager of a campsite. Now you must decorate the place by choosing furniture, tent and amenities, arrange them as you please and then invite neighbouring animal characters to visit your camp.

The goal is to make animals give you things, for which you’ll need to complete quests, such as fetching fruits, gathering ingredients for a soup, and then crafting furniture that they wish to see. Pocket Camp’s visuals look just like Animal Crossing did on Nintendo’s handhelds, with chunky animations that don’t scream high-def in any way.

Pocket Camp is a free download, which means there are microtransactions to allow you to speed up quests. We weren’t too bothered by this, at this stage, and found the experience engaging and faithful to the franchise. Its adorable visuals and pleasing music make it a good game for your kids, as long as you’ve turned off the option for in-app purchases.

How to access: Android, or iOS
Time commitment: As much as you want, really

Other mentions:
Worms W.M.D, the turn-based tactics game that lets you wreak havoc with all sorts of weaponry, is now available on Nintendo Switch, a year after release on other platforms. There’s new content too, and it’s most fun when played with friends locally.

Battle Chef Brigade, a video game that wants to be a movie, featuring warrior-cooks who take on monsters and then cook them as master chefs in training, is out now on Windows and Nintendo Switch. The game was funded via Kickstarter in 2014, and has gone through various iterations before release.