Alia Bhatt's new movie is out Friday on Netflix. 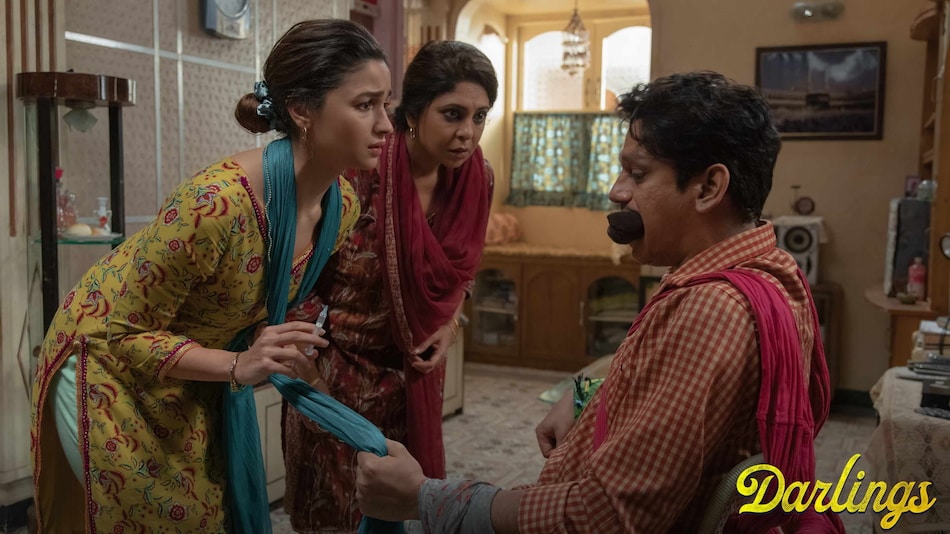 Darlings — starring Alia Bhatt and out Friday on Netflix — marks Jasmeet K. Reen's “feature” filmmaking debut, following her tenure as a screenwriter in Bollywood. Stress on the word “feature”, because she had previously directed some short films, including a small segment in 2007's Dus Kahaniyaan, an anthology dealing with diverse subjects relating to lust, infidelity, and a spectrum of emotions. Her upcoming full-length Netflix movie, Darlings, deals with similar topics, through the eyes of a quirky mother-daughter duo, as they seek courage and love in this unforgiving world.

Besides leading the cast, Bhatt serves as a producer — her first time — via her Eternal Sunshine Productions banner for this upcoming Netflix original film. From a thematic standpoint, Darlings deals with domestic abuse through a dark comedy filter, while trying to not come off as insensitive. “It's the characters that are very light and quirky who think that they have everything in control, but actually have nothing in control. So that is where the humour really comes in. It's more like a comedy of errors,” explained Bhatt in an interview.

Set against the backdrop of a poor neighbourhood in Mumbai, Darlings centres around Badru's (Bhatt) suffering at the hands of her alcoholic husband Hamza (Vijay Varma), who implodes with rage every time he gets drunk. As a countermeasure, she teams up with her mother (Shefali Shah) to try and get rid of his problem by putting him through hell. The script, written by Reen herself, was passed onto Bhatt through Bollywood actor Shah Rukh Khan's Red Chillies Entertainment, after which the streaming service chose to distribute it.

Darlings releases this Friday, August 5 at 12:00am PT / 12:30pm IST exclusively on Netflix worldwide. Those interested will be required to have a subscription plan, starting at Rs. 149 for mobile and Rs. 199 for the basic plan, which lets you stream on a TV or laptop but only in SD resolution.

Badrunissa “Badru” Shaikh is a troubled, albeit happily-married woman who tries to cure her husband's alcoholism when an argument erupts into physical violence. To establish and maintain authority, she conspires with her mother to try and poison him — just enough to keep him sick, and put him through physical and mental pain. The unconditional love for her husband is unmatched, as evidenced by her trying on expensive dresses to spice up their relationship.

Shah (Delhi Crime), billed second on the list, plays Badru's mother aka her partner in crime. As a mastermind behind the twisting events in the film, she observes Hamza's habits and suggests poisoning his food, as he loves drinking at dinner time. Luckily, Badru rejects the idea and opts for Disulfiram pills. But the mother continues to support her as an alibi, when the cops get involved.

“She may not necessarily be right, but is not at all ashamed of it. I think it's interesting because it's not a one-sided character while offering an interesting dimension to a mother,” said Shah in reference to her character in an interview.

Mirzapur's Varma plays the husband Hamza, who is all-caring during the day and turns into a tyrant at night while intoxicated. The Darlings trailer offers some justification for his drinking habits, as he gets pushed around at his job as a ticket checker. Morning routines consist of drinking cold drinks, standing idly at railway platforms, and occasionally cleaning toilets, as he contemplates his mundane life. At some point, he is forced to stay home (thanks to the mother-daughter duo), casting a web of lies and conspiracies relating to his sudden disappearance.

Roshan Mathew (Choked) plays Zulfi, a family friend who assists Badru and her mother avoid suspicion. Hamza's inactivity prompts a missing person case, pulling Zulfi into the mix as a suspect and the falsely accused. The possibility is further strengthened by feelings of mistrust, where Hamza suspects Zulfi of committing adultery with his wife.

Vijay Maurya (The White Tiger) plays the police inspector in charge of the case, with a standard questioning procedure that puts Badru and her mother under light suspicion. He is joined by Santosh Juvekar as a junior officer, and Rajesh Sharma (The Tashkent Files) as Hamza's boss from the railway department.

Here's the official synopsis for Darlings via Netflix:

Darlings is a dark comedy drama which explores the lives of a mother-daughter duo trying to find their place in Mumbai, seeking courage and love in exceptional circumstances while fighting against all odds.

The first teaser trailer for Darlings was revealed on July 5, featuring a metaphorical voiceover that explained the gist of the story. The trailer unravelled the troubled relationship between Badru and her husband Hamza, while offering some insight into Zulfi's involvement in the story. Both men are roughly the same age, with the latter supposedly being in a relationship with the mother — freely walking in and out of the house, when Hamza is out for work.

On July 25, Netflix released a full-length trailer (below) that spoiled some important plot beats. The editing was performed in a way that would abide by the mother and daughter's testimony to the cops, thereby misleading the audience at first. Both clumsily report Hamza's disappearance, when his boss comes over to check on him, leading to a maelstrom of manipulation tactics.

As part of the promotion, Netflix also released some fun, informational skits with Bhatt in character, that have nothing to do with the actual movie.

The production budget for Darlings was revealed to be between Rs. 20–25 crore, with original plans for a theatrical release. However, in February, distribution rights for the movie were sold to Netflix India for Rs. 75–80 crore.

The first reviews for Darlings go up this Friday, August 5, the day it releases on Netflix globally. The Gadgets 360 review of the film will be out on the same day.

Here's the official poster for Darlings from Netflix: