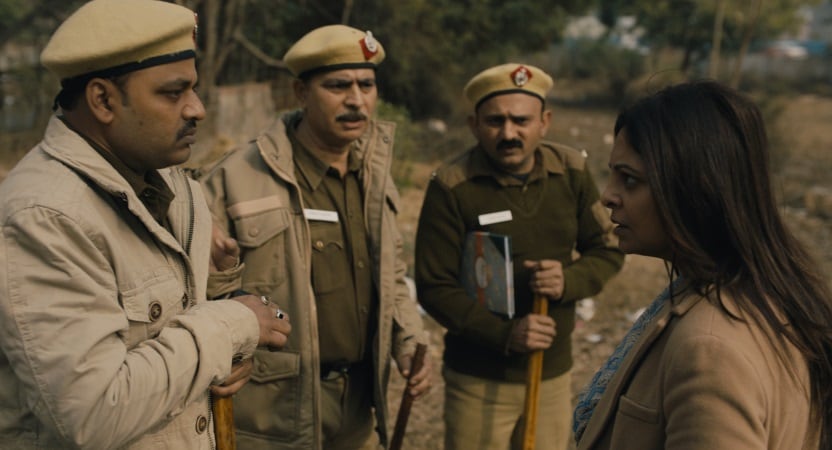 Deep into the first episode of Delhi Crime — the new Netflix police procedural anthology series, whose first season is inspired by the investigation of the Nirbhaya case — the protagonist, DCP Vartika Chaturvedi (Shefali Shah), lays out a series of instructions for her team that would lay the groundwork for apprehending the rapists. The scene is about six minutes long and it serves as a table-setter for what's to come in the next six episodes, which showcases how the Delhi Police nabbed all six suspects in the span of five days, with little to go on. And it was an intense scene to film, as Shah and the show's creator, writer and director, Richie Mehta, told us in an interview last week.

“[That scene] was 12 pages of dialogue that she had to absorb, to give the orders to everybody, to set the stage for everything that's about to happen,” Mehta said. “And that's a very charged moment, and I think, in that moment, the viewer will see, ‘Oh, this is what this is about now. This is what's about to happen.' And it's happening so fast, and it's coming purely from a mix of emotion and experience of the character, as well as what she felt and what she feels, because none of these other officers have necessarily seen what she has seen, with the victim. And that was a very intense moment. There was a lot to cover but it's not something you can do over three days. It has to just come out, in the moment. And it was all on [Shah]. We just kind of stood back and watched. I don't know how she did it.”

“I was traumatised. I was completely traumatised,” Shah added. “Before the shoot, I was sitting in the vanity van, actually on the floor in the loo. I was crouching and crying. I was like, ‘I can't do this. I just can't do this.' On set while we were there, he wanted to run the whole thing together — when you see it, it is cut, because like he said, it's charged, it's just throwing instructions — [because] she doesn't take a breather in between. But I kept going up to him and saying, ‘Please, please, let the actors go. Please, I'm making a fool of myself'

“‘I'm making a fool of myself in front of everyone. Please let them go.' But I think, finally he and Beverley [Mills, the editor] did a great job. They saved me.”

Later, Mehta added that every intense scene demands its own approach and explained why he reduced the crew at other times.

“When you're doing a scene that's very charged, and really very intense, you've to create an environment where people are comfortable portraying that and shooting it,” he said. “In certain moments, you close the set and so you've the minimal amount of people. There's silence and there's no dilly-dallying and no people dropping things and doors opening and stuff. And then, if an actor just whispers something because they just wanted to say something to me privately, I can hear it.”

“It's, I think, just being patient. Creating an atmosphere of comfort, not of this mania that sets can become. Certain scenes demand it, when you're on the streets running around. But a lot of scenes, it was just, ‘Guys, let's be sensitive to what we are doing, and there was never any friction about that.'”

Delhi Crime is out now on Netflix worldwide.

Delhi Crime, Netflix's Police-Centric Look at Nirbhaya Case Is Gripping, Well-Made
Delhi Crime: Rasika Dugal on Playing a Cop and Why the Netflix Series Was Cathartic