Dune is set to release in India and HBO Max this week. 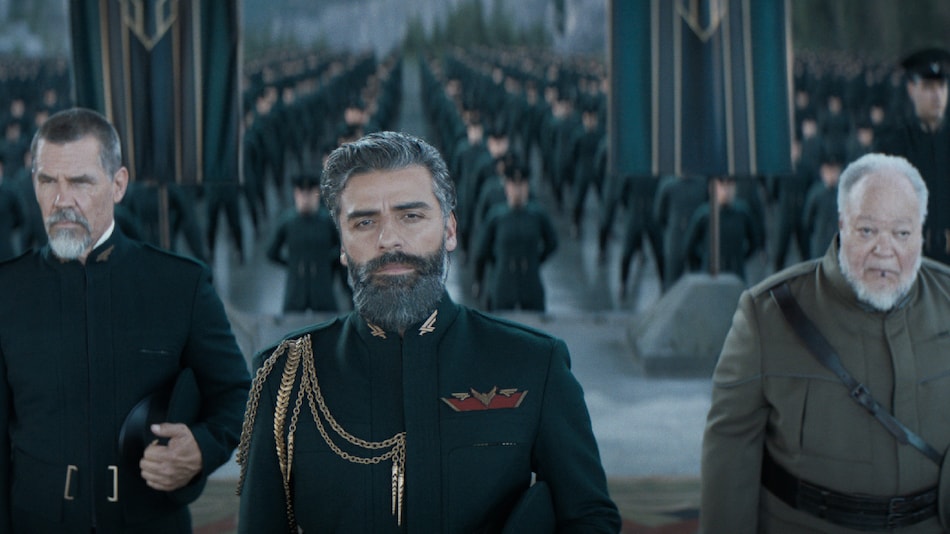 Dune, the American epic science-fiction film, is all set to be released in India and on HBO Max this week. The star-studded movie has been directed by Oscar-nominated French-Canadian director Denis Villeneuve. In Dune, young nobleman Paul Atreides and his family are shoved into a war for the dangerous desert planet of Arrakis, home to the universe's most valuable substance: “spice”. Dune is the first part of a planned two-part adaptation of the 1965 sci-fi novel of the same name by Frank Herbert. The movie only covers about half the novel and still has a staggering runtime of 2 hours and 35 minutes.

That said, Dune has so far received positive reviews following its limited release. The movie stars an ensemble cast that includes Timothée Chalamet, Zendaya, Jason Momoa, Oscar Isaac, Rebecca Ferguson, Josh Brolin, and Javier Bardem. The filming took place in multiple locations including Budapest, Jordan, Norway, and Abu Dhabi. Dune is a production of Legendary Pictures and Villeneuve Films, with Warner Bros. Pictures handling distribution. Dune will be released on HBO Max only in the US.

With that, let's dive deep into all that you need to know about Dune, including the release date, cast, trailer, music, and Dune 2.

The movie premiered at the 78th Venice International Film Festival on September 3. The movie was then released in select locations including Austria, Belgium, Switzerland, and France on September 15. Dune came out in Russia, Spain, and the UAE during the second half of September.

The US and India release of Dune is scheduled for October 22. On that date, Dune will also be available on HBO Max at no additional charge for the first month. Using HBO Max, you can download Dune on your phone or tablet.

Fans in Australia will have to wait till December 2 to catch up with the movie.

Dune was previously scheduled for a 2020 release. The movie was first slated for a release in November 2020 which was later shifted to December 2020, after which it was pushed to a 2021 release.

Zendaya plays the role of Chani, a Fremen woman and Paul's love interest. Javier Bardem dons the role of Stilgar, the leader of the Fremen tribe. Fremens are the natives of Arrakis who live deep in the desert.

Chang Chen plays Dr. Wellington Yueh, a Suk doctor. The gender of the character of Dr. Liet-Kynes, the imperial ecologist, has been flipped in the movie and is played by Sharon Duncan-Brewster.

Legendary pictures had signed Oscar-nominated director Denis Villeneuve to direct Dune by February 2017 itself. Villeneuve has movies like Arrival, Sicario, and Blade Runner 2049 to his directorial credit. Amy Adams-starrer Arrival had picked up eight Oscar-nominations in 2017.

Insider reported that Villeneuve was adamant that Dune be filmed in real locations. Villeneuve had told the New York Times that he intentionally chose real filming locations in order to "inspire myself to find back that feeling I was looking for of isolation, of introspection," as well as for his mental wellbeing. Villeneuve also has his name attached to the screenplay and is one of the producers of the movie.

Oscar winner for best adapted screenplay and five-time Oscar nominee Eric Roth is one of the three writers of the screenplay of Dune along with Jon Spaihts and Villeneuve himself. Talking about the movie, Roth told Collider, “[Working on Dune] was wonderful. I'd done some work for Denis on Arrival and we became kind of a little bit of soulmates. And so when Dune came along, he asked me if I would approach it. And I did, and I wrote a big, full, overwritten Eric Roth draft that had certain things special to me.”

The cinematography of Dune was by the Australian cinematographer Greig Fraser who has movies like Zero Dark Thirty, Rogue One: A Star Wars Story, and Lion to his credit.

The background music of Dune was scored by the venerated German film score composer Hans Zimmer. The Oscar-winning music director has previously worked with Villeneuve on Blade Runner 2049. According to Variety, for the first trailer of Dune, Zimmer supervised a 32-person choir via Facetime for the recording of the cover of Pink Floyd's Eclipse. A 32-voice Los Angeles ensemble gathered, four at a time over eight sessions at Zimmer's Remote Control studio in Santa Monica to score the music.

A mythic and emotionally charged hero's journey, Dune tells the story of Paul Atreides, a brilliant and gifted young man born into a great destiny beyond his understanding, who must travel to the most dangerous planet in the universe to ensure the future of his family and his people. As malevolent forces explode into conflict over the planet's exclusive supply of the most precious resource in existence—a commodity capable of unlocking humanity's greatest potential—only those who can conquer their fear will survive.

Warner Bros. released the first look of Dune over a year ago in April 2020.

On reviews aggregator Rotten Tomatoes, Dune holds an approval rating of 89 percent, based on 141 reviews. The platform's critics consensus says that “Dune occasionally struggles with its unwieldy source material, but those issues are largely overshadowed by the scope and ambition of this visually thrilling adaptation.”

On fellow reviews aggregator Metacritic, the film has gained a metascore of 75 out of 100 based on 37 critic reviews, indicating ‘generally favourable reviews'.

Dune, titled onscreen as Dune: Part One, has been planned as a two-part movie. The first part of the movie only covers about half of the sci-fi novel by Frank Herbert of the same name. For Dune: Part One, Paul Atreides, played by Chalamet, is the protagonist. But Villeneuve revealed that Zendaya, who plays an Arrakis native and Paul's love interest Chani, will take over as the protagonist in Dune: Part Two.

“When I did the casting for Chani's character, I met a lot of actresses,” Villeneuve said. “Zendaya wanted to audition and today, after shooting the film and seeing what a wonderful actress she is, I'm sorry I auditioned her...I can't wait to shoot the second part of Dune to get them back together. Knowing that in the next chapter, Zendaya will be the protagonist of the story.”

Warner Bros. has yet to green light Dune 2.

Will there be more Dune?

WarnerMedia had also announced a spinoff series to the movie, Dune: The Sisterhood. The spinoff series is for its HBO Max streaming service and will be part of the same universe as Villeneuve's Dune reboot. The spinoff will serve as a prequel to the film. Villeneuve will direct the pilot and Spaihts was initially named to be scripting Dune: The Sisterhood. However he left the series in late November to focus on the movie sequel. Diane Ademu-John will be the new showrunner of the spinoff series. The series will be told through the eyes of a mysterious order of women known as the Bene Gesserit.